Another nice surprise of this year. I got a small pack of it from a group shopping for green tea. I wouldn't have otherwise noticed this tea. It's a historically famous green tea. But for some reason, maybe due to its "gunpowder" kind of appearance, a spherical-shaped green tea wouldn't catch much of my attention.

The dry tea leaves are curled. I had never seen such beautiful and shiny curled green tea! 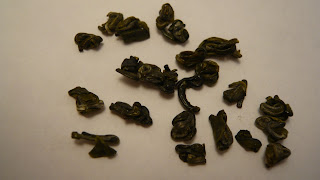 I wasn't sure how to brew this tea. But it doesn't look like a tea hard to deal with. I put newly boiled water in the glass mug, and then put in some dry tea grains a few minutes later. 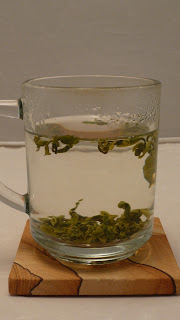 The tea leaves dance and expand beautifully in water. Many of them sink all the way to the bottom. Some of them float around while expanding. The bottom of the mug looks like a growing meadow when all the tea leaves slowly expand and tremble. 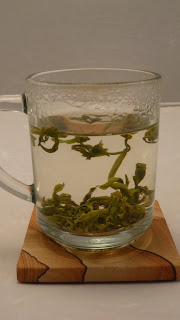 The leaves are from earliest harvest of spring. Each curled tea "ball" turned out to be two leaves and a bud. 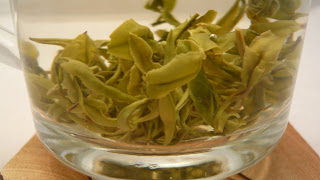 It's a wonderful tea, with a sweet floral taste and yield more infusions than average green tea.

In China, this tea is both famous and under-noticed. It was invented in the 17th century or earlier and indeed one of the oldest tea varieties. There are other teas with deeper historical roots, but many historically famous tea changed throughout time. Today, not many teas are made in the same way as they were 400 years ago, but Yong Xi Huo Qing is. The tea is not commonly seen even in Chinese market, partially due to its small annual production.
at 11:23 AM

Hi Gingko,
sounds (and looks) like a very nice, interesting tea. I'll have a look in some german online-tea-shops, if I can find it.
Thanks for sharing your impressions!
Stephan / www.Tee-Tagebuch.de

teaspring.com is a bit too far away from Germany. But I already found a german online-shop selling the Yong Xi Huo Qing: http://www.teehaus-bachfischer.de/yong-xi-huo-qing.html

I think, I'll give it a try in the next few weeks.