This is back logging. Original taste note is on Steepster. 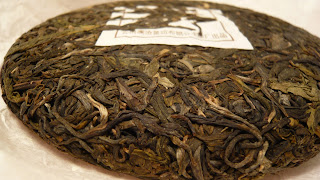 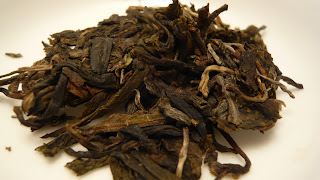 It's wrapped by a blank piece of white cotton paper. I asked why, and the seller said the production was more than expected and the factory was out of printed formal wraps. At that time, the printing industry in Jing Mai was still primitive and couldn't respond promptly to emerging orders that were out of the plan.

I've seen other puerh products with blank labels too. Some of them are pretty good. Generally they are sold under market average prices, and only reputable sellers with solid customer base would carry them. Most people would feel more comfortable with a tea in a more formal, printed wrap. I have some puerh at home with blank wraps, for drinking at home only. I store some other puerh cakes as future gifts to girlfriends, uncles, aunts and possibly "business" friends. None of them has a blank wrap. They are not necessarily better than those with blank labels, but they look more brilliant as gifts.

Many times I heard this from different people, "don't let the words on a puerh wrap influence you too much". And I think it's good advice. Many terms such as "ancient tree", "thousand-year-tree", "pure / consistent material (纯料)", or names of famous tea producing areas, all of them could have flexible interpretations when showing up on a puerh wrap. Everybody knows this. But still, most people would prefer a wrap printed with anything to a blank one. It is like saying don't judge the inner quality of a person or a thing based on its appearance, while in fact most of the time we are all influenced by the appearance.

Something else interesting about this cake is, according to its inner label (it does have one), it's one of the 9999 limited edition cakes made by Lan Cang Jing Mai Princess Bu Lang Tea Factory, for the 2005 event of Horse Caravan Puerh Tribute. The event gathered 120 horses, 43 horsemen and more staff. It took them more than 5 months to carry a lot of puerh tea from Yunnan to Beijing. The event was organized in memory of the first puerh horse caravan that carried tribute puerh to the mandarins in Beijing, which happened approximately 300 years ago and was virtually the start of a glorious era for puerh. To my understanding, these cakes with blank wraps were those left behind in Yunnan, not those taken up north.
at 11:39 AM

Printed wrappings are overrated. I guess they're handy whenever you have a lot of cakes and need to identify which is which, but otherwise they're merely an aesthetic item.

I'd actually like to have one with a blank wrapper. It'd be my secret cake. Mwahahahaha.