The other day I planned to write about this but ended up writing why I like Wu Yu Tai. Now I am starting again.

Wu Yu Tai is the tea store my parents adore. It used to sell mainly green tea and jasmine green tea, with some red teas and several oolongs. After Tie Guan Yin and Yan Cha became popular in North China, Wu Yu Tai started to sell more oolong products. When I was younger, I had a lot of green tea from there. But I didn't pay much attention to their oolongs.

Once (2007, I think) I got this Honey Aroma Tie Guan Yin Grade 2 rather randomly when buying other teas in their store. I tasted it once and thought the flavor was a little too dark and heavy (probably the vacuum pack held the "fire taste" of the tea for longer time). Then the tea was left in my cabinet for over a year. When I tried this tea again, I suddenly fell in love with it. The leaves don't seem to be from very high elevation. The spent leaves are not as thick, and don't look as handsome as some higher grade tea leaves. But still they are nice leaves. The flavor is very warm with an aroma that I would indeed compare to honey. Its flavor seems darker than its liquor color. I always think the color of the little vacuum wrap perfectly reflects the flavor of this tea.

Later on, after I started getting a series of traditional style Tie Guan Yin from a favorite supplier of mine, I've noticed that some roasted Tie Guan Yin seem to have greatly improved flavor after resting for months. I didn't figure out why, and to me it's always a guess that which Tie Guan Yin would turn better this way. 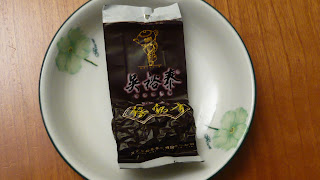 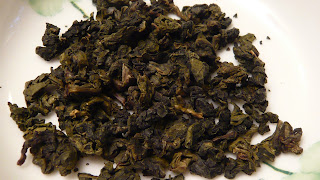 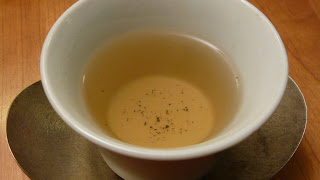 In recent years I've found my so far favorite series of charcoal roasted Tie Guan Yin and think they are averagely better than the Wu Yu Tai Grade 2. But still I think this Grade 2 tea has some unique characters. Since I liked this Grade 2 tea, I had been wondering what Grade 1 would be like. In the past 2 years, I passed by Wu Yu Tai for several times, but didn't get the Grade 1 tea either due to other distractions or the store I visited ran out of it. But eventually I got a can of it this past summer. 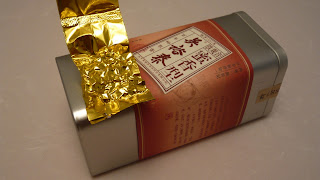 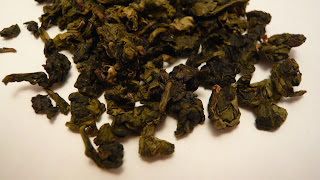 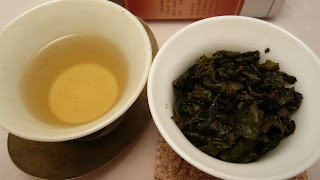 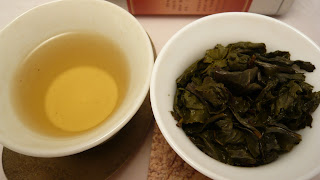 This one is actually significantly different from the Grade 2. It has very prominent aromatic fruity flavor which in the Chinese tea jargon is described as "honey peach aroma". The flavor reminds me of an old style Tie Guan Yin from the year of 2001, just stronger. Still the leaves are not of the highest grade of Tie Guan Yin, but they are definitely from high elevation and they look very much alive even after 10 infusions.

What touches me the most about this tea is, although this is the first time I've got it, I know it has been around in the past decade. Wu Yu Tai sells a lot of modern green style Tie Guan Yin nowadays, but it never gave up this traditional style product. This tea was there before Tie Guan Yin ever got popular in North China, and it has been there throughout all the time when most tea drinkers adore modern green style Tie Guan Yin. That's when we use "classic" and "timeless" to describe a traditional business.

The tea is sold in Wu Yu Tai for 120rmb ($18) per 100g. About this tea and a few other teas from large Chinese sellers, some people asked me if I could sell them here. I don't have the plan to sell them, because their wholesale scale in China is at the level of xx kg. It's way above me. Besides, working with brand name products is not my major goal. But I do help people buy directly from China at Chinese local prices (shipping is still steep so it only works well when price and shipping balance out). I believe most great Chinese teas have never been introduced to the western world yet (while major exporters and importers are busy dealing with cheap tea of roughly $1 per pound), and there should be more channels. With today's communication and financial technologies, there surely can be and should be more ways for people to get their tea.

It would be an interesting experiment to see how letting the tea rest affects the flavor. I am sure that it would taste different resting in a yixing canister vs. the original vacuum pack.
Doesn't yixing help to pull out some of the harshness from the roast? The "Fire?"

Now you've made me very curious about the teas I haven't tried from China. I'm all for more access. I do know it's complicated buying directly from source, import taxes & import regulations amongst many other concerns.

There's a wikihow page about importing tea from China which pretty informative too.

While I acknowledge that letting tea rest/age can be a good idea if you want it to change, it's just not something I can really do. I like to drink my tea whenever I want, and so I don't think most of my tea will have much of a chance to age.

Except for my 2009 Nan Jian pu'erh cake. That one is quite strong, and it needs time to mellow out. I still will brew some occasionally, but I leave it alone for the most part in order for it to age.

I'm with Jackie. I want to see what teas China is hiding from us. >:O

Jackie, let me know where to send your tea! :D

Billy, yeah I have some "ginger jar" to rest some high fire oolong. But for most of them I just leave them in the original bag and have then whenever they are ready. I don't know much about aged oolong so tend to be somewhat conservative and keep most tea sealed. But I've noticed that many roasted oolongs take some longer time to rest while the producers would suggest only several weeks. I guess their time line is based on traditional storage but nowadays there is always the vacuum pack. Once I noticed a tea developed nice fruity flavor in several months and immediately broke the seal of all other bags of the same tea. But most of the time I have no clue which tea would turn to what flavor in how long time :-p

Like Fox, I drink most tea new. But from time to time I bump into some older tea and like it. I guess I just don't have the courage to let a lot of tea age while having no idea what its future is. But there are some unfinished roasted oolong accumulating anyway. It feels good to think that they can possibly have a brilliant future :D

I am in Hong Kong at the moment and spent most of the day drinking teas at a few shops. One of the sellers is from Fujian and they have a farm producing TGY. Both sellers recommend 1-2 year old TGY and don't sell the current crop but wait till next year. Both consider the traditional better than the green TGY. After prodding the seller with the farm, they pulled out a 97-98 Monkey Picked which they have been re-roasting and keeping it alive. Really good, but, so was the 2 year old tea from the other seller which looks like your Grade 1 from Wu Yu Tai and they also called Honey aroma. Delicious!

Ho Go, is the monkey pick you had curled shape or strip shape?

I am so jealous that my tea friends are going to Hong Kong, Greece and all other warm and fun places while I am here waiting for the winter!