Huo Shan Huang Ya (Yellow Bud) is one of the teas that have longest history but changed a lot throughout history. The name of this tea was recorded in history of Tang Dynasty as one of the tribute teas. But the tea people drank in Tang Dynasty was dramatically different from what we have today. In Ming Dyansty and Qing Dynasty, this tea won national popularity. Most loose leaf green and yellow teas we have today follow the processing methods developed in late Ming to Qing Dynasty.

Production of Huo Shan Huang Ya was discontinued between early 1950s and early 1970s. The production started again in 1971, when there were still a few tea farmers in their 70s or 80s who knew how to make this tea. Since the discontinuity of production was only 20 years and the resumed production was under direction of people who had the expertise, we can assume the tea we have today is quite similar to what this tea was like in Ming Dynasty. However, it's also worth noticing that the processing method of this tea was adjusted in mid-1980s to make it more similar to a green tea. This was due to market demand, according to the book 中国茶谱. In some sense, making a yellow tea greener can be called a betrayal of the tradition, because yellow tea is very unique and doesn't have to be made greener to be valuable. But as we know, such betrayal of tradition happens from time to time with a market incentive. In recent years, yellow tea has received more and more attention and in a process of revival. In America, I've heard more and more tea drinkers talking about yellow tea too. Currently, market demand on yellow tea is increasing. Both Meng Ding Yellow Bud and Huo Shan Yellow Bud, although still often made greener than they should be, start to have more and more traditional style yellow tea products, again, with a market incentive. Sometimes, in tea or other fields, it's easy for us to blame producers for chasing market profits and giving up traditional values of their products. But in fact, without consumers caring about traditions and without intellectuals advocating for traditions, how can we account producers for all the loss of traditions.

This is the first time I've had this tea. I got it, again, from my group shopping organized by a tea lovers' group in China. This product is a "greener version" of this yellow tea. Currently in market, greener version of this tea is still more commonly seen than the traditional yellow version. But this year some friends of mine got some yellow version this year, which makes me feel hopeful to get some in future years. 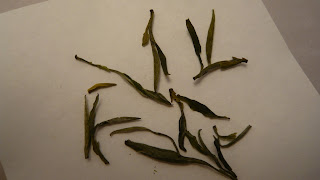 Although a green version, this tea has a honey hint flavor unique to yellow tea. The liquor is less green or bright than that of a typical green tea. 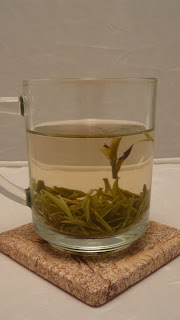 Like many other great things, yellow tea was very possibly created by accidents. After the "kill green" step in green tea making (when enzymes are killed), if the tea is not cooled and dried soon enough, tea leaves will be oxidized to certain degree and become yellow (similar phenomenon can be seen if cooked vegetable/beans are kept humid and hot in a sealed container for a while). Once this happened and gave the tea enjoyable flavor, people started to intentionally let it happen to make yellow tea.

An alternative hypothesis is that yellow tea was created before green tea. And later one, some people improved the processing procedure and eliminated any delay that may cause oxidation. Hence green tea, an un-oxidized tea was created.

So there is no final conclusion yet whether yellow tea appeared in history before or after green tea. But this makes me think that traditions of tea making are complicated. With small adjustment in the procedure, a yellow tea can be made greener, and a green tea can be made yellower. Then it's really hard to say which way is THE tradition, the original tradition or the newer tradition, the most classical procedure or the reformed/refined procedure.
at 11:02 AM