Oh! What a cheesy name! But that's what I can think of so far to name this tea.

I heard of the idea from a friend - it's a popular way of drinking tea among Yunnan people (which part of Yunnan, he doesn't know though. Yunnan is so large and diverse!).

Step 1, brew Yunnan green as usual. This time I used a Yunnan roast green (the one that was made on January 1, 2010). The original version is using Yunnan sun-dried green though. I don't have any of it, but puerh young sheng is basically the same thing, just it's hard to get a young sheng with beautiful leaves. Next time I will try using the Guan Zi Zai Yi Wu, which has the most beautiful leaves I've seen from a puerh cake.

This is the amount of leaves I used, and later it turned out a bit too much. Or, my mug is too small. 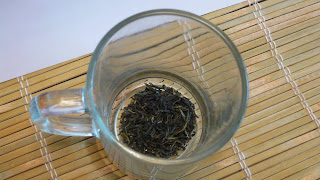 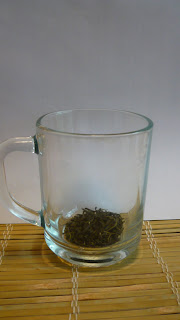 Step 2, enjoy the first 3 infusions as usual. But for this, I refilled the mug every time when the tea liquor was about half of the cup volume. This is partially because I wanted to keep the strength of the tea, partially because I did use too much leaves. Yunnan green is strong! 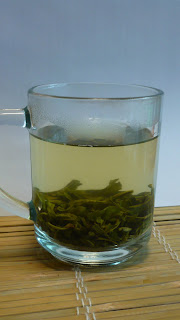 Step 3, at the end of the 3rd infusion, when there is about 1/4 volume of the liquor left (I assumed 1/4 was better than 1/3 because the more newly added hot water, the better the tea would be infused), add in Yunnan red (black) tea. 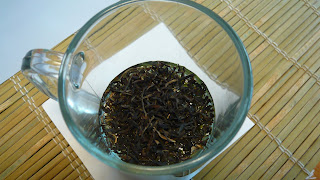 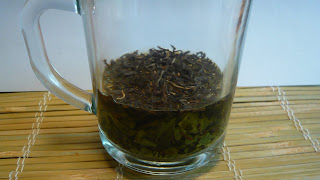 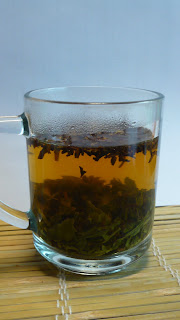 That is it. Then you can re-infuse on and on. This lasted a whole afternoon for me. Eventually the leaves expanded a lot and there is relatively small space for accessible tea liquor. I guess, this is a tea enjoyed by people who drink a lot of tea and don't have much time to take care of their tea brewing. In other words, this is a tea for real workers to gulp, not for Gongfu drinkers to take sip after sip. So for such a purpose, this mug is too small. 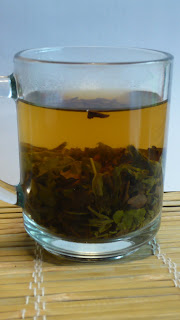 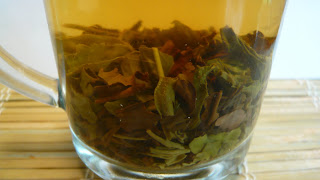 The first infusion after adding red tea was a bit astringent. But I didn't mind at all. Yunnan people would say if a tea is "bitter without biting your mouth and astringent without sticking to your tongue", then it's a good tea. I kind of agree. The astringency instantly became sweet aftertaste. Then later in the many infusions, the tea became smooth and remained flavorful.

Supposedly, Yunnan sun-dried green (such as a young sheng) is even stronger than roast green. So next time when I have a whole day of work, I will start the day with some Yi Wu leaves in a big mug and add in some Yunnan red tea later on. It can be a good companion without much attention required.

P.S. I brewed it again in my travel tea bottle for a road trip. It's a very convenient way to have tea during a trip, and I infused the same leaves over and over during the whole afternoon trip. 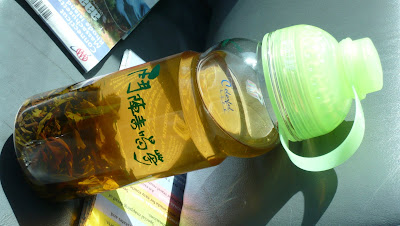 That does look like quite a bit of leaf for that much water!
What temperature water do you usually use for this style of brewing?

I used boiling water to start the green tea (by way of a cold empty glass, so probably like 190-195F eventually). The water of re-infusion is from a thermos and the temperature should be around 190-195F too.

Interesting. I've not seen this done before.

I think I share this perspective on bitterness and astringency...I like my teas to have a bit of an edge--especially green teas.