What do you do with the first infusion of an oolong 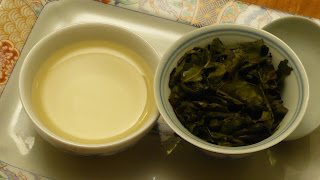 When people brew oolong, the first infusion is often discarded. It's called "rinsing the tea" by some people, and "warm-up infusion" by some other people. I prefer to call it "warm-up infusion", because I drink it up most of the time (which is not a common practice) and I don't want to feel like drinking dish-washing water :-p In addition, I believe functionally, the warm-up step is almost essential for many oolongs.

The historic root of "washing the tea" is the combination of a few factors. Many old people would say, the discarded first infusion is meant to be an oblation for the God (whatever relevant God s/he is) and ancestors. This is an important aspect of Chinese traditional life, considering tea is always an essential part of traditional ancestor worship ceremony. Another tea custom related to ancestor worship is, in Gongfu tea session, when several small tea bowls are used, it's the best to arrange them in a half circle, but never in a straight line. The reason behind this custom is, only at ancestor worship, the tea bowls are lined up in front of ancestors' memorial tablets. In other words, it's considered improper and ominous to serve a living person in the same way as serving tea to ancestors (who are dead people). On the other hand, there were numerous rules in Chinese traditional society, so many that at certain point people may get tired of them. Nowadays, many young people don't care about the old rules, or don't know them at all. Sometimes the young people may break the rules and are chided by the old guys. I do follow the "not to line up the tea bowl" rule, because you never know if a guest in front of you minds a lot about any ominous signs. But when I drink tea alone, I steal most of the first infusions which are said to belong to ancestors :-p

As a science major, I believe many cultural phenomena have physical science reasons behind them. Many oolongs, fisted or strip-shaped, are tightly rolled. And therefore it's often necessary to allow them sometime to "wake up" in hot water before they can yield full flavor. I believe that's an important reason for the "warm-up infusion". I usually use hot boiling water for the warm up, pour the water in brewing vessel, let the water submerge tea leaves, and then pour water out as soon as possible (some people would hold it longer for this infusion). Then I would spend a minute or so taking care of other things, so that the tea leaves further "wake up" in the hot vessel before the official "first infusion".

The "rinse" or "warm up" infusion also helps remove small pieces of tea debris. This can be important because many people prefer not to use a filter in their Gaiwan brewing sessions. Some oolongs, such as Wuyi, Dan Cong, many Taiwan oolongs and traditional style Tie Guan Yin, have very neat whole leaves. With these teas, after an initial rinse, there won't be much more debris coming out of later infusions.

A side benefit I've experience from drinking the warm-up infusion is, by tasting it, I get an idea how fast the tea leaves opens and release flavor. I usually use 20 sec. to 30 sec. for each of the first a few infusions in a oolong session. Some teas, such as an excellent Tie Guan Yin, can yield a sweet and fragrant warm-up infusion. Then I would use shorter time (around 20 sec.) for the next a few infusions. Many people may think it improper to drink the warm-up infusion. So I steal this infusion only when I drink alone :D

Some people believe the purpose of rinsing is to clean the tea. I generally believe tea is already one of the cleanest food stuff in our life (considering the entire procedure of sorting, pan frying, and/or roasting). In certain type of modern sanitary view, anything handled with human naked hands without gloves is thought of as "not perfectly clean". But it's not in my concern. Besides, I don't believe a short hot water flush can clean anything to much extent. If a tea is not clean enough, a rinse won't help anyway.

I've also known people who don't carry out a rinse or warm-up infusion. A Taiwan tea farmer once told me he would never rinse his tea because his tea doesn't have debris and he hates to discard any tea water. That's understandable. I often feel the tendency not to discard any tea water either. If you prefer not to have a rinse or warm-up infusion, then probably a longer initial infusion is necessary.

At the last, I want to address a myth. It's more than two or three times that I've read a statement that "the Chinese always rinse their tea and discard the first infusion". It's not true. I can't speak for all the Chinese, but most Chinese I know don't "always" rinse their tea, and many never rinse their tea, especially considering green tea drinkers are still the largest tea drinker group in China.
at 11:52 AM

I see the act of rinsing the tea as a more traditional ceremonial act. If I am performing a gong fu session for other people I always rinse. When I am brewing alone, I rinse to get a feel for the aroma of the tea.
Very neat write up
=]

I also think we can set apart "old rules", because they pertain to a cultural world that is not exactly ours (all the more if we are westerners:D).

so I would think in terms of "is rinsing a benefit for aromas and flavors ?"

my experience is : sometimes yes, and sometimes no.
It is all about "opening" flavors and aromas (not leaves, rinsing does not open the leaves physically, unless tehy are steeping, and then it would not be a rinse). And also (particularly for aged or significantly roasted wulongs) aiming at a more balanced, expressive liquor all along the gong fu cha (brew after brew).
Rinsing is not a brew, it should not steal aromas.

but then another stage is at least as important : preheating carefully.

> I preheat and rinse all wulongs except dan cong. for stripe shaped and light roasted leaves you can easily do with no rinse though.
> I sense that for wuyi yan cha preheat+rinse is particularly important to provide better balance and expression of flavors and aromas.
> only preheat for dan cong (very carefully). rinse does not bring any "plus". but preheat makes a big difference.
> I preheat but do not rinse green white and yellow teas.
> hei cha & pu er : I always preheat and rinse (different prorocils according to the type and degree of compression).

the few chinese people I know do not rinse their tea either. they tend to steep much longer and make fewer brews. Does it mean tht "it is the way it should be done" though ? not necessarily. very few french people do not care about airing techniques of wine or the shape of the glass, they just open the bottle and pour, that does not mean airing wine/shape of glass is a insignificant detail. Chinese or French or Whatever, we all do certain things on a "business as usual" basis as for everyday consumption. and even in our own culture, we are not exposed to the whole range of manners/products.

I very much agree on the "clean it" myth. I am very sure the bread I buy everyday is muuuuch dirtier than my chinese and taïwanese teas!! and I don't rinse my slice of bread.

to me, it is all about flavors.

sorry, I made a few blunders while typing:

prorocils
omg
I meant protocols.
my laptop is dyslexic :DD

I always drink the first infusion anyways. I'm not one to toss out any tea. <_<

I tend to settle on my own (usually unorthodox) ways of brewing all tea, especially oolongs. I experiment a lot and often come up with novel ideas that I haven't seen communicated elsewhere, but that work for me.

I have, in some cases, however, found discarding a first infusion to be useful. Some oolongs, including a lot of Dong Ding, I find to have a soapy quality that I dislike--which is to some degree taken out in the first infusion. However, the teas for which this method works are in the minority--usually if a Dong Ding is soapy to me, it's soapy in all infusions and discarding a brief one won't help.

I actually have found a benefit, however, in rinsing certain green teas, although in that case I would do it with cold water. Some green tea can be acidic. Rinsing the leaf with cold running water for about 10-15 seconds seems to take some of the sourness out of the flavor, while leaving the aroma intact. I've never seen anyone other than me recommend this...but I'd recommend trying it if you find a tea you otherwise like, but that is too acidic for your tastes.

I also use this practice for some herbal teas. It is most effective for commercial blends which add citric acid (a practice I dislike very much) as this acid is highly water soluble and washes out almost immediately.

Thanks guys for sharing your thoughts! It's always fun to chat about what every does with their tea!

I liked this post and the resulting comments so much, I blogged about my thoughts on the topic yesterday.

To put it briefly: until I read this, I steeped Oolongs much like any other tea (albeit at a lower temperature).

Thanks for being so specific in your description. I learned quite a bit in a very short time here yesterday.

Reading this makes me wonder, perhaps the first 'rinse' is more useful when showing tea to others, such that you 'put your best foot forward' by not having your guests drink the rinse.

I like the comment about not needing to do a rinse for strip-type dan cong oolongs; my guess is this is because they are not as tightly rolled as many oolongs are, and so do not need to open any before brewing?