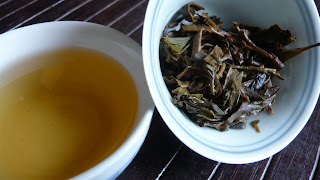 I didn't remember if I ever wrote about this tea, and only by using the "search" function of the blog, I found that I did wrote about it here.

There has been more than a year since I tasted this tea last time. Somehow when I think of having some young sheng, I tend to always go for Yiwu tea and Lincang tea first. Bulang tea is what I would like to "forget" about for several years and what I don't expect to be as friendly, although there has been more and more exceptions in recent years, such as the Zhang San showed here.

Recently, when dissembling a few cakes of this tea for sample packs, I suddenly felt the cake looks quite adorable and felt I had good appetite for it. So I tasted it again. Although I can only compare it to the same tea a couple of years ago based on memory, I do believe this tea has become smoother and sweeter. The tea liquor has become more soupy. It doesn't have as uprising aromas as found in new Zhang San. But it has the deep tone aroma and the thick texture that I believe will further develop. I'm not experienced enough to judge the future of a tea. And unfortunately among people who give firm predictions of a tea, I don't always know who to trust. But I do feel good about this tea, I feel comfortable either drinking it now or keeping it for future - And of course I don't have much of this tea to store for future, because I couldn't predict a few years ago how outstanding it would be several years later. This happens all the time to most of the puerh most people collect, I guess :-p
at 12:02 PM No comments: 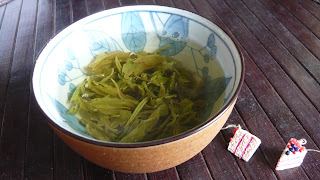 Each buyer will get a small 15g pack of 2012 Yunnan Roasted Green (the 2012 spring tea) for free and for comparison. The 2012 spring tea is from high mountain region of Jing Gu / Puerh City. The 2013 tea is a winter tea from lower mountain region of Nannuo. I've been tasting some recent year Yunnan green. Generally speaking, I still prefer to have green tea new and fresh, but I thought Yunnan green last surprisingly well compared with most other greens. Even a steamed-green style Yunnan tea seems quite ok after 2 years. So I thought it would be interesting for people to compare 2012 and 2013 Yunnan green!
at 12:00 PM 1 comment: