Some interesting information about tea countries in 2010, for your enjoyment -

Which countries had the largest annual tea production in 2010?

Which countries exported the most tea?

Which countries imported the most tea?


Which countries consumed the most tea?

Which countries had the largest per capita tea consumption?

Take a guess before your read on!

All lists are hierarchical.

Data are from Agriculture Department of China and published in October 2011 issue of Tea Time, Hangzhou, China.
at 11:50 AM 1 comment:

tea (and tea ware) away from home

What tea and tea ware to bring on a trip away from home? This is a question tea drinkers frequently ask themselves.

For me, here are a few considerations:
1. Whether or not to bring any - on some trips, especially backpacking trips, I don't bring any. Too lazy to put up with the chores and worries (of breaking tea ware). I've seen several online discussions about tea for camping trips. So far none of them has convinced me to bring tea to camping trips myself, partially because I am one of the clumsiest campers, and partially because I don't feel like to have any tea when there is no daily shower and the restroom has no roof.

2. On most trips that I do bring tea, I bring barely any tea ware. On most trips, I have to carry my own stuff, and I stay in very modest lodges. So again, too lazy to put up with the chores and worries. Besides, I want the amount I carry to be proportional to the time I will be able to spend with tea. On many trips there are a lot of things to see and to do, especially because I am the compulsive, running-around type of traveler. When we were traveling in Mexico, my partner could spend half a day sleeping in the hostel, and another half day drinking and singing with others on the porch. I was like, "No! I didn't spend $500 air fare and travel 1000 miles here to sleep in the hostel!" I ran around and visited places all day long, every day! So, there was not much time for tea. I knew it before the trip, and therefore would pack very little tea stuff for the trip. When I take with me minimum to none tea ware and very small amount of tea, I usually have teas that are easy to brew in cold water, as well as black and/or green teas that are sealed in home-made teabags. Although I say black and/or green, one oolong I've found very convenient is Oriental Beauty, as I tested it with mug brewing and found it wonderful brewed in this way. Oriental Beauty is my favorite aeroplane tea. It brews well even in the not so hot water provided on board. Its aroma makes people jealous! Besides, ever since more and more airline started charging people for food and beverage on board, I've enjoyed bringing with me nice snacks, fruits and teas that will make the airline offerings look totally miserable, haha!

3. If I am on a short trip and can stay in a decent place with boiling water supplies, I would usually bring my gaiwan travel set. This is partially because of the obvious convenience and versatility of gaiwan, and partially because the gaiwan travel set is usually quite cheap and easy to obtain. I would rather not take along any nice tea ware if I have to worry about them being accidentally broken.

4. If I am on a multiple-week trip and can stay in a decent place (such as the Toronto vacation I have from time to time, or the 1.5 months I spent in Boston in the past summer), I would bring a few more pieces of tea ware and quite a few different teas with a few "anchorage teas" and a bunch of sample size teas. When selecting which pieces of tea ware to bring, I will use following criteria:

a. It's relatively sturdy. I won't pack the most fragile into luggage and let them see the ups and downs of the "outside" world.

b. Each piece of tea ware should serve multiple functions for multiple teas. A lazy person always wants every moment of her labor worth it!

c. After packing in one small teapot and one large teacup for one-person session, if there is more space, I would manage to pack in a few small teacups. Most of the times I drink tea alone. But I want to be ready if some other people could join me in tea sessions. When there are more people, one teapot may do its job well, but multiple teacups are necessary.

To me, this tea is both interesting and strange. Wrapped in a blank piece of paper, it has beautiful leaves. According to the producer, the cake was compressed in 2009, with tea leaves harvested from 2002. I don't know why they waited for years before compressing the cakes. Maybe the tea leaves were bitter when newly made? Maybe they were experimenting on some new method? I don't know. 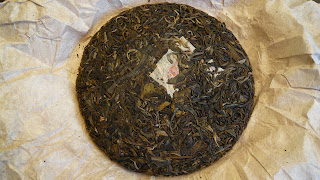 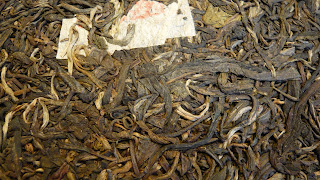 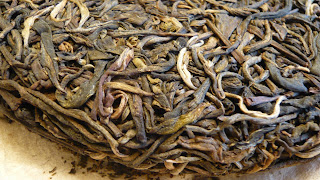 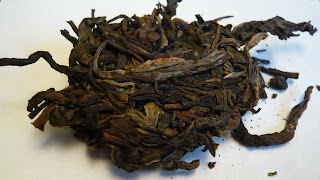 The liquor color is quite red for a Kunming-stored 2002 tea. 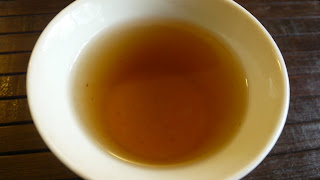 The taste is the interesting and strange part. I took a few sips of the tea. After about 20 seconds, my mouth was filled with wonderful aroma, honey and floral, wave after wave. In my mind, that's typical Jing Mai aroma. This is the positive side, and I want mention the positive thing first. On the other hand, here comes the strange part - in the first 20 seconds after I took the sips, all in my mind was, where is the flavor?? I drank this reddish liquor, and didn't feel much, if any at all, flavor. For a moment, I thought there was something wrong with my tasting sense. Then I realized probably this is what the tea is. It feels very strange.

The sweet aftertaste kicked in after a few infusions, but it didn't show up as fast as in many other aged sheng.

I tasted this tea for a few more times. Finally I decide that I do like it, and it can be a pleasant casual drink. But still I feel it very strange that either the tea doesn't have much flavor before the aromatic aftertaste comes out, or my radar cannot detect its flavor at all. If the infusions are made longer, the tea will yield some mild astringency which turns into pleasant aroma instantly. But still, I didn't detect much flavor.

So I wonder if this has anything to do with the fact that the tea leaves stayed loose for 7 years before being compressed into cakes. 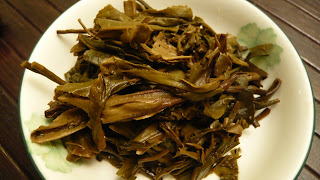 This tea is a lot milder than some other Kunming-stored sheng of the same age. Milder, and, to some extent, weaker too. I guess it may have something to do with the fact that the tea was kept as loose leaf tea until it was compressed in 2009.
at 2:29 PM No comments:

(This is inspired by Rich's recent writing about The Invisible Energy around Us. I always think tea drinkers are relatively more sensitive people who pay a lot of attention to the surrounding environments and how their own body systems respond to the environmental changes. I personally have rather conflicting attitudes toward chi, as well as many other traditional Chinese medicine theories, such as yin and yang, ice and fire, etc.). On the one hand, I am very reluctant to talk about it, and often suspect when different people talk about it, they aren't even talk about the same thing. On the other hand, I believe these concepts worth more exploration, and shouldn't be misjudged or belittled, which actually happens a lot, even in China.)

Forgive me for presenting a skull in front of you :-p The little holes under the eye pockets, indicated by number "7" in the picture, they are what I am talking about, infraorbital foramen (pl. foramina).

I was taught this Chinese traditional facial massage when I was little. One important step is massaging the spot that's about 1/3 inch under each of the eyes. According to Chinese medicine, it's a very important acupuncture point (or it can be understood as "energy vortex") of human body. Self-massaging on that spot makes my eyes and face feel totally relaxed. I was told to do so, and I have been doing it whenever I can remember to. I didn't really think of why this should be a good massage spot. Chinese medicine, unlike Western medicine or Modern Medicine, is not based on anatomical evidence, but based on philosophy and thousands of years of medical experience. Besides, I don't even have the knowledge about all the acupuncture points on human body, let alone why each of them is important. I just picked up small things that were taught to me and easy for me to practice.

It wasn't until I saw a real human skull that I realized my favorite facial massage spots are these two little holes under the orbitals named infraorbital foramina! Many such little holes on the bones are important passages of blood vessels (and/or nerves). Massaging them stimulate regional blood circulation. No wonder it feels good to massage infraorbital foramina! It's good to know! But must I know it to benefit from my facial massage? Not really. I had enjoyed my facial massage for many years even before I took my first human anatomy class (which, in fact, didn't cover infraorbital foramen because it is too trivial). Generations of Chinese medicine practitioners never had a chance to observe a human skeleton (anatomy was not a research method in traditional Chinese medicine). But it didn't make them less confident about the acupuncture points. Besides, above anatomical observation on infraorbital formina may not be the only explanation why that spot is an important acupuncture point.

I believe in science. I believe in evidence and scientific inference. Meantime, I think one of the greatest things about science is, it acknowledges the limitlessness of the world and never stops the exploration of unknowns. "Absence of evidence is not evidence of absence." - it was an enlightening moment when this line hit me in a lecture given by a scientist.

While I am writing this piece, I am having a 2011 Dong Ding Beauty oolong from Taiwan. It's sweeter than usual due to the worse than usual pest attack of the past spring. If I try to give some concrete and specific explanations about my writing behavior, caffeine and adrenaline should definitely be included. But they can't really give a full explanation. If I chose to be abstract and metaphysical, I would say it's all because of the chi of the tea and the penetrating energy from the cold spring days, haha...
at 2:26 PM No comments: