This tea is quite novel to me. I would otherwise put it into the category of Concept Tea. But I didn't, because I don't like its taste. But it's just me. I know some other people like it very much, and this tea is quite expensive as a red tea from Yunnan. Ha! Doesn't it feel good once you are sure you don't like an expensive tea and don't have to buy it in the future! :D

The tea is made from a newly discovered mutant varietal whose young leaves and buds are of purplish color.  Here is a photo from a producer of this tea, comparing tea leaves of this mutant varietal and normal tea leaves. Instead of having a lot of chlorophyll as most plant leaves do, these leaves have large amount of anthocyanin, a pigment often found in colorful flowers of plants as well as some fruits. Anthocyanin in oolong leaves contributes to the floral and fruity flavors of oolong. 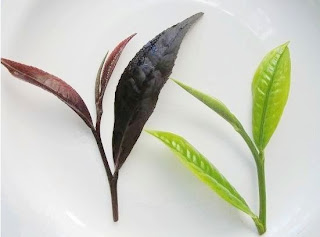 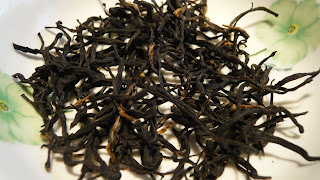 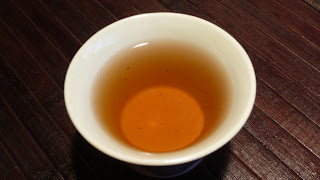 Taste: floral... too floral, all floral... Normally I even like floral taste, but this is too much for me, too much floral flavor and not enough other tea flavors. After a few infusions, I decided I couldn't bear with this tea. Later, a friend visited. After treating him with a few other teas, I steeped the left over leaves from my pot and ask him to taste it. He loves it!

Probably this tea can work well when blended with some other tea to give its floral flavor. But I won't have enough tea leaves to try.

I also got a puerh sample made of this kind of purple leaves. Will try it later!

A little more thought about anthocyanin - a few weeks ago, a tea friend and I discussed a little on the cultivars of Sun Moon Lake red tea. I've got two versions of this tea, one is made from small leaf cultivar, and one is made from red jade cultivar (#18 cultivar). The latter one has become a hotshot in recent years and is a lot more expensive than the small-leaf cultivar. But for some reason, I like small leaf cultivar much better. I don't dislike red jade. But the floral taste of red jade doesn't blow me away. In fact, I don't quite understand myself. I usually love floral taste, such as what's found in Tie Guan Yin and some Taiwan High Mountain Oolong. But for some reason, I dislike Purple Beauty and am not too crazy about red jade. So I wonder if my taste preferences are largely due to the amount and forms of anthocyanins found in these teas.
at 10:16 AM

Thanks for the post Gingo, it explain to me few things. I had 25g sample of "Purple Beauty". I run out of it very quickly but I was wondering with every cup: Do I like it? For sure interesting experience -from purple color of dry leaves to floral taste with strong, dandelion like bitterness (which I like) when I used more leaves. But you are right - I also miss complexity it the Purple Bueaty I had.

Hi Petr, I think that's another interesting aspect of anthocyanin. In the past, I saw some books saying anthocyanin is both source of floral fragrance and source of bitterness (that's why some oolong may get bitter when over-brewed). But the bitterness of anthocyanin sometimes is nice (such as in purple beauty) and sometimes is unbearable. I wonder if it's because of its different forms or processing methods.

I ordered some of this from Yunnan Sourcing a few weeks ago and cant wait to hate it or love it. ;)

A lot of people love its aroma :D

Yeah, not a fan of this tea either. It's one of these "novelty" things that showed up after the pu boom that, IMHO, just doesn't work.

How fascinating. I have never drunk this type of tea, a "purple oolong." Perhaps a cold infused Purple Beauty might be better appreciated in the heat of summer.

Wow...this fascinates me. A few years ago I started paying attention to the flavor of vegetables, in the cases where the colors vary from green/white to red, such as swiss chard, and amaranth, both of which come in both green and red varieties. They taste notably different!

I hope that this varietal continues to be cultivated, and possibly produces new ones as well.

One thing I've also noticed is the degree of variation in color. I once took beech sprouts from European beech trees growing in an area where there were both copper beeches (with the dark purple color) and green beeches. Some of the seedlings were green, others the same purple color, and others an intermediate golden-bronze color. There's so much possibility for color, and often, color corresponds to flavor in fascinating ways!

Great...now I want to add this to my "Tea Want" list. Maybe in June.

I think I saw two comments from Alex and Geoff that have disappeared by now. That's terrible! Blogger was said to be "not available" and was on read-only mode so I couldn't reply yesterday.

I think what Alex said about similar plants can have different leaf/bud color in the same environment is very interesting! That seems what happens to this purple mutant tea. It's probably a defensive mechanism to scare off bugs that don't like floral scent.

Notesontea, interestingly, some people believe the anthocyanin components may have great cooling power.

TeaHub has sold "Purple lady", a green tea (?) with a violet liquid. I've tasted it once, and all I can remember is enormously powerful Qi it had.

Jessee, thanks for the information! That sounds very interesting! I checked out the website of tea hub, and yes it looks like the same varietal. They mention that different pH will cause different liquor color. That can be a science project :-D Maybe that purple lady green tea is similar to puerh made from this varietal.