I sampled quite a few Jin Jun Mei products in the past year. Most of them are very enjoyable. Here are two of them. I single out these two because I think it's interesting to find out how they are so similar in certain ways and different in some other ways. 1:6 is about their prices, the second's price is six times as much as the first one - not that the first is inexpensive :-p I have to say I love to sample Jin Jun Mei but always hesitate to buy it.

Jin Jun Mei is a fancy type of Lapsang Souchong. It was created in 2005 by Jiang Yuanxun (heir of a historical Lapsang Souchong family business) and his colleagues. I am sure they have some "secret formula" for the processing of this tea. But my simplified understanding is, Jin Jun Mei uses fine leaf buds of Souchong tea trees, whereas most traditional style red teas use bigger leaves as raw materials. The name of Jin Jun Mei can be interpreted as Golden Handsome Brow, indicating the rich golden tips of this tea. Besides, the character Jun in its name comes from the name of one of the creators of this tea.

Of the two teas I have here, the first one is a Wuyi Jin Jun Mei, produced in Wuyi but out of Tongmuguan, the original producing region of Lapsang Souchong. The second one is Tongmuguan Jin Jun Mei.

The two teas look quite similar. 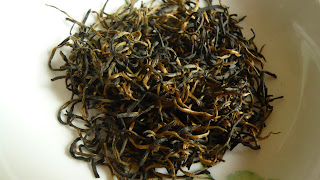 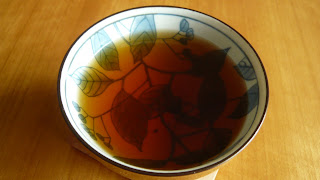 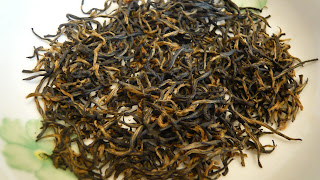 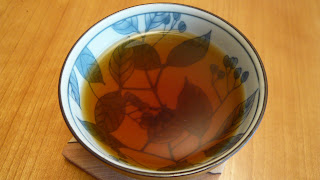 I always think, it's often impossible to judge similar but different teas based on physical appearance. These two, I think, are another set of examples. If taking a closer look of the dry leaves and judging by the amount of "golden tips", I think the first one looks prettier than the second one, yet the second one is the expensive one. 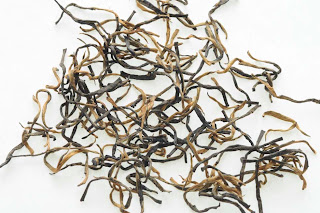 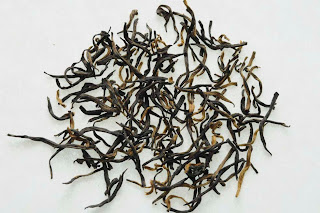 The color differences of above two photos are mostly likely due to light intensity. The dry leaf colors of the two teas are almost the same.

Only after tasting them, I kind of understood why the second one is more expensive than the first one. I "kind of" understand it, in market sense. But I have to say, personally I like the first one much better. The first one tastes very creamy and chocolaty. I enjoyed it very much and even kept its empty bag for a longer while to inhale its chocolaty aroma. The second one is enjoyable, but of brighter aroma and quite floral. I think the dark toned, chocolaty aroma is more common in traditional higher end lapsang souchong, while the floral aroma is not something commonly seen in Fujian red tea. So my understanding is, because it's generally harder to achieve floral aroma in a lapsang souchong, and because the floral aroma is more in line with the "mainstream" preference, the second Jin Jun Mei is a lot more expensive than the first one.

This floral Jin Jun Mei still tastes quite pleasant to me. But I once had another floral Jin Jun Mei earlier that I couldn't bear with. I guess sometimes the overwhelming floral flavor in red tea can drive me crazy, as I described in this post about another red tea and its floral flavor. But this is just my taste preference. I always feel glad when finding out I prefer a less expensive tea to a more expensive one. It feels like finding a deal :-D

Overall I like Jin Jun Mei, but it's not a tea that blows me away. I thought of including Jin Jun Mei in Concept Tea, but hesitated to do so. The tea is wonderful and it does involve some innovative techniques. But the concept behind Jin Jun Mei phenomenon, in my opinion, is more of a marketing concept than a technical concept. I am not saying Jin Jun Mei's fame is entirely based on marketing strategies. What I mean is, it created a new niche in the market.

Just several years ago, in China, very few people were willing to pay a lot of money for a red tea. Therefore there was little incentive for producers to make red tea with the fine leaf buds, using meticulous protocol. But in the past several years, Jin Jun Mei has dramatically changed Chinese red tea market. In fact, Jin Jun Mei is a market miracle. In few years after it was created, the tea has become the most wanted red tea in Chinese market (or, at least "most wanted" among rich people), and is sold for up to thousands of dollars a pound, or even more. I am still wondering how they did it - how the producers of Jin Jun Mei managed to sell it for so much money. Besides, Jin Jun Mei indirectly caused price rise of other red teas in China. I think, even the dramatic price rise of Yunnan red tea is somewhat related to the Jin Jun Mei phenomenon. In addition, Jin Jun Mei has inspired a new wave of red tea products. There has been "Jin Jun Mei style" red tea developed in Sichuan, Anhui and other tea producing provinces. Many of them don't aim at simply copying Jin Jun Mei, but making red tea at a new level, a level of very fine processing and very high price.
at 10:51 AM

When my suppliers come to my country for business reasons they usually give me as present a fancy can with Wuyi Jin Jun Mei Tea, they explain me that is a very expensive red tea , politely i never asked them why a black tea (red) can be so expensive. But thanks to this blog all is clear I drink it in the morning with my breakfast and is good .