Discussion on Long Jing (5a) - Long Jing and non-Longjing cultivars 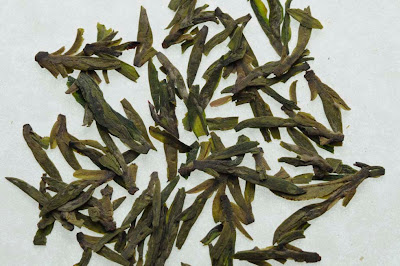 Discussion on Long Jing (4b) is here.

In spite of all the comparison photos, I have to clarify that photos of dry tea leaves are usually NOT effective ways to distinguish cultivars, even between a Long Jing cultivar and non-Longjing cultivar. Then, what's the point of comparison? I believe, the point is the awareness of various cultivars. Today, more and more tea lovers demand high quality green tea, including Long Jing. More and more people are aware of the importance of information such as harvest date and producing region. However, in the international market, as well as in Chinese market, many retailers don't have the habit of specifying the cultivar of their Long Jing product and many people assume all Long Jing tea is from the same type of tea bush.

As discussed before, there are various Long Jing cultivars. Besides, non-Longjing cultivar is not uncommon nowadays. Theoretically, products made from non-Longjing cultivars shouldn't be called Long Jing. But in reality, they are sometimes sold even in traditional Long Jing regions, labeled as "Long Jing". As I discussed in a previous discussion, cultivar is not an issue for a lot of other teas, but is a big issue for Long Jing. There is no way to get Long Jing flavor from a non-Longjing cultivar - one doesn't need to be a tea expert to realize this. It would be sad if some consumers are picky and careful about harvest date, producing region and everything else, but end up getting a higher end "Long Jing" product made of a non-Longjing cultivar. This kind of things happen, both in China and in the international market. Therefore, more and more tea lovers in China have started to inquire about the cultivar when buying a Long Jing product, and some retailers of Long Jing have started to include cultivar information in their product descriptions.

Wu Niu Zao cultivar is one of the commonly seen non-Longjing cultivar used in Long Jing style products. It lacks most flavor characteristics of Long Jing. Many people find Wu Niu Zao not as tasty as Long Jing. However, Wu Niu Zao is not a "bad" cultivar. It's one of the earliest harvested teas in Zhejiang province, and being early is an important advantage of this cultivar. Harvest of Wu Niu Zao starts as early as February, about a month earlier than Long Jing #43 cultivar, and 5-6 weeks earlier than Long Jing Jiu Keng group cultivar. (I include harvest dates of all three cultivars in this tea harvest calendar.) In late February to early March, Wu Niu Zao can be as expensive as authentic Long Jing, because by that time, Long Jing and most other green teas are not in the market yet. Once authentic Long Jing is available, many tea drinkers will stop buying Wu Niu Zao. So the market niche of Wu Niu Zao is pretty much in February to mid-March.

Wu Niu Zao is often made in Long Jing style. With its advantages and shortcomings, Wu Niu Zao is not an inferior cultivar, in my opinion. But it's important for tea drinkers to know what cultivar they get at each purchase, because Wu Niu Zao can look very similar to Long Jing cultivar, while the flavors of the two are very different.

The photo on top of this post is a "specimen" of Wu Niu Zao that I collected. It's a Wu Niu Zao made in Long Jing style. But it's a very well made Wu Niu Zao, and there can be great variation among Wu Niu Zao products in physical appearance as well as flavor quality. I can't always tell the cultivar based on photo - the failure rate is probably larger than 50% :-p

Recently I showed this Wu Niu Zao photo to a Long Jing farmer. Interestingly, he said, just from the photo, he wouldn't be sure if it's a Long Jing cultivar or Wu Niu Zao. Well, he knows Long Jing thoroughly. If he can't tell, I guess we don't need to beat up ourselves for not being able to distinguish cultivars based on dry tea leaves. It's just easier for everybody if the cultivar information is carried along with the product all the way from producers to retailers.
at 10:54 AM