Oolong, as a semi-oxidized tea, is often said to be in a state between Green Tea and Red (black) Tea. It's often interesting to me comparing products of the same tea cultivar made with different processing techniques. This happens a lot in oolong. I also believe for green tea lovers and black tea lovers, oolong is a great tea type to expand their tea territory. One can always find oolong products closer to green tea taste or black tea taste. Then it's possible to move to the other side little by little. Therefore I plan to go over several pairs of oolongs. Each pair of tea are made with leaves of the same cultivar, but one is lightly oxidized, and the other is more oxidized.

Here are two Cui Yu teas made with lighter and heavier oxidation. Cui Yu (Green Jade) is one of the four major oolong cultivars in Taiwan. The story about origin of Cui Yu and another Taiwan Oolong cultivar, Jin Xuan, is here.

The first Cui Yu Oolong is typical Taiwan light oxidation style. It's indeed very close to green tea, both in color and taste. 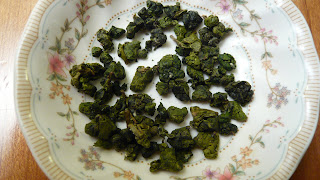 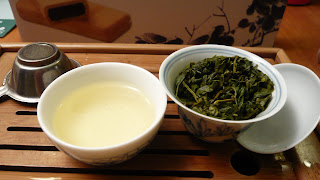 The light oxidation technique retain the refreshing taste of high mountain oolong to the largest degree. The tea has an uprising fragrance of spring grasses, with some floral notes. The tea doesn't last for many infusions, usually 3-5. I would recommend this tea to every green tea lover. I've found the taste of this tea is somewhat between Japanese green, Chinese green and most other greener oolongs.

The second Cui Yu Oolong is made with Dong Ding style technique (featured with medium oxidation and medium to high roasting). It's a Grade IV (Award of Excellence) from 2009 winter Tea Competition of Nantou County Tea Commerce Association. (See more descriptions of Competition Grades of Taiwan Oolong here.) All the teas in this competition are either in or influenced by Dong Ding style. Cui Yu is a new cultivar in Taiwan oolong history, and most Cui Yu products we see in market are greener style.

(This is a little off-topic: Sometimes leaves of Cui Yu are mixed among others to make Dong Ding Oolong, but we wouldn't know if the product is not labeled with tea cultivar names. And often they are not labeled. Traditionally Dong Ding Oolong should be made with Green-heart oolong cultivar only, but nowadays there are more leaves from other cultivars used, sometimes all leaves are mixed to make a Dong Ding product. Such mixing sometimes promotes tea taste by combining various flavors. But it's also very confusing, because very often cultivars influence tea tastes much more than geographic locations of tea production.)


Now back to the topic - This Dong Ding Cui Yu, I think, is very unique. It serves as an excellent contrast with the popular greener Cui Yu. This is the first Dong Ding style Cui Yu I had. If I hadn't seen the product label and had done a blind taste, I guess I would have been totally confused. I would have thought it was like a Dong Ding Oolong, but I would have been deeply puzzled because the taste was quite unique and unlike other Dong Ding products I have seen. I put this tea in a tea guessing game on TeaChat, because I think it's a very tricky one :-D

Dry leaves are by far not as green as the other one. These look typical Dong Ding to me. 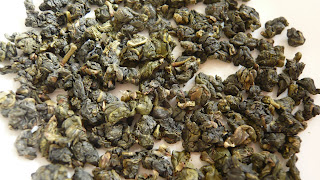 Tea liquor color is closer to a traditional greener style Dong Ding I have, and is nothing similar to the other Cui Yu. 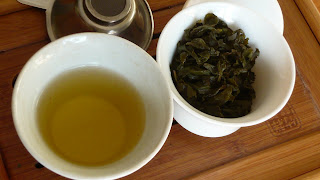 Then I brewed these two teas side by side in small tea bowls (and by the way I found both of them are good for mug/tea bowl brewing). 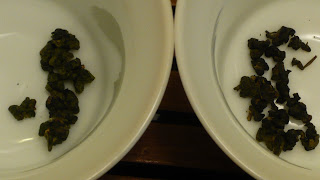 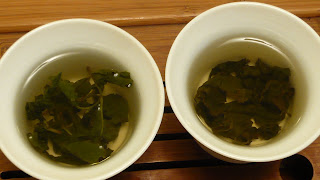 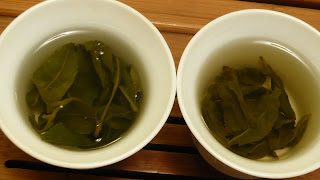 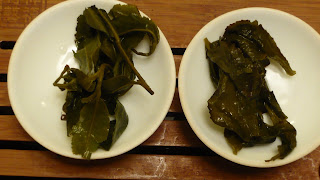 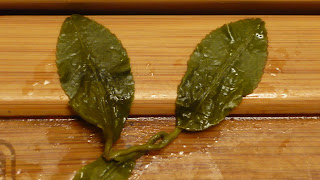 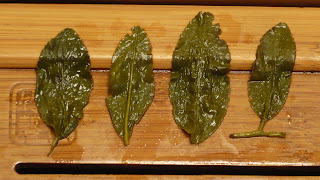