Extra notes: Just because a tea has a wrapper that looks the same as this one, it does NOT necessarily mean it is the same tea. Due to the chaotic system of CNNP, I myself have quite a few teas of this same wrapper (such as the two mentioned here) and I'm sure you would see many more out there. They could be completely different.
________________________________

Before I start, let me clarify that a lot of opinions in this post are my personal opinions. This doesn't mean these opinions are not shared by many people - in fact, they are confirmed by a lot of tea friends and tea professionals. But I do want to point out that in discussions of dry-stored vs. wet-stored puerh, there are always different opinions and different observations. The differences may not be about right or wrong, but rather due to individual tastes and from which angle the observation is made. The collecting and storage process of "88 sheng" is largely from the collector's own narration, so I would take it pretty much as a fact instead of opinion.
________________________________


7542 is one of the most popular Dayi products. It's known for its solid quality, plain price (that's if Dayi doesn't keep inflating prices) and typical Meng Hai style (thick liquor texture and powerful sweet aftertaste). Although 7542 is intrinsically good, it's current reputation has a lot to do with the famous "88 sheng" (８８青饼), which is 7542 product from approximately 1988 (most likely from 1989-1993), collected by a Hong Kong merchant Chen Guoyi in 1993, for about $2 a cake (now, everybody is jealous...). 10 years later, in 2003, when Mr. Chen released his collection to the market, it was sold out very fast at unprecedentedly high prices. The current market price for 88 sheng is more than $1500 or even $2000 a cake, that's if one can find an authentic and well-stored cake.

88 sheng is a very interesting phenomenon in a few ways.
1. It's a legend of 7542, an inexpensive tea to begin with. It demonstrates that the value of a tea doesn't entirely depend on original cost of tea leaves.

2. It's a legend of dry storage and relatively dry storage. The tea was stored in Yunnan (supposedly dry storage) for its first a few years, and then stored in non-humidified warehouse in Hong Kong, which was, at that time, very untypical for Hong Kong tea industry. Nowadays, more and more collectors in mainland China, Hong Kong (such as the famous Cloud) and Taiwan (such as the famous Shi Kunmu) favor dry (or relatively dry) storage. More or less, the confidence on dry storage originated from 88 sheng.

3. It's a legend that's Not replicable. Many legends are like this. Once it has happened, it won't easily happen again. Otherwise it's not a legend. Nowadays, 10-year-old 7542, although not extremely easy to obtain, is not rare. But if you see one, including the one in my collection that I am going to talk about, please do NOT think it must be comparable to 88 sheng. In my opinion, 88 sheng is not replicable for several reasons:

a. Although people say, big factory products like Dayi's have "stable formula", it's all relative. Tea, as a biology products, can't possibly have absolutely stable formula. Not 7542 products across all those years are of the "same formula". Besides, life of each batch of aged puerh is unique. Even when strictly controlled storage conditions are used (as nowadays more and more used in Guangdong, China and Malaysia), it's impossible to guarantee the same 10-year outcome.

b. 7542 production is larger and larger. Even for the same quality, probably no one should expect to make as great a fortune out of 7542 as Mr. Chan did. No one should... but "88 sheng" did ignite many people's dream of fortune :-p

c. When 7542 was first released to the market, it was one of the few, if not the only one, (relatively) dry-stored big factory routine product puerh over 10 years of age. It changed many people's view of puerh, especially people who supposed puerh all had damp taste and didn't think they liked puerh at all. So the legend of 88 sheng had its historical background. Later on, such style is more and more commonly seen, and is no longer deemed as so much of a unique style. 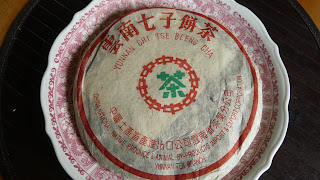 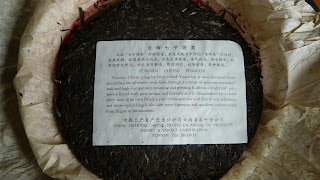 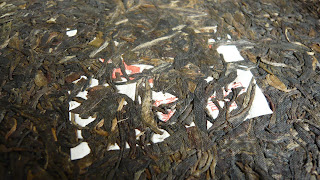 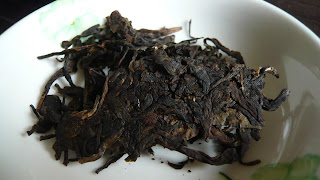 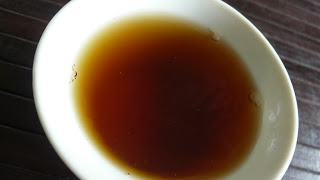 I think it's a very powerful tea. The aroma is not as prominent as some other puerh of similar age. But it gives great warmth and strong sweet aftertaste. The tea is already quite drinkable. But it should have great potential for further aging. When it comes to sheng, I am more of an "aroma" person. I value the honey-like aroma in some sheng, and often fear that such aroma would disappear with aging. But the strength of this tea is not at its aroma, but at its rich texture and thick flavor. So to me, there is no fear of loss in aging :-)

Overall, this is one of the sheng puerh that I like very much. But there are a few other sheng that I like better. I don't think this tea is a legendary tea (otherwise I would become so rich haha...). But I think it's a great tea.
at 12:56 AM

Excellent post about the history of the legend of the '88' 7542 cake. I learned so much! I'm curious to know where you got your cake from? No cheap specimen! A beautiful cake :)

I get most of my puerh from Kunming. I've also had some very nice tea aged in Guangdong. I think with strict management, Guangdong would be better than Kunming for non-humid storage tea. But Kunming is more worry-free as flood and high humidity could occasionally happen in Guangdong.

I'd be really curious to know how much of the 88 madness you describe was the widespread hype and enthusiasm that ensues when people start bidding something up or going after a scarce commodity.

When prices soar that high, I'm usually highly skeptical that there's much underlying real value justifying the price. There may have been a good value initially, but once the prices begin shooting up, it becomes hysteria and groupthink, at least as I see it.

The price of 88 sheng is largely based on its rarity. When it's rare, whatever price is reasonable, as long as there are people wanting it. It's rather subjective, just like the price of a lot of antiques. They are expensive because people want them. On the other hand, collectors can try to create market hype to make their collection worth more.