I don't know how many Chinese green teas there are. From books and articles, I've read about probably 200-300 specific kinds. From time to time, I bump into a tea that's not recorded by the books I read (such as the Orchid Fairy Twig). Also from time to time, I see information about some tea that I've never tasted. Then I would put it on my wish list and hope someday I can taste it. But there are always more teas on the wish list than what I have time to try. This tea caught my attention because my friends recommended two suppliers who are actually not sellers but were just selling their family tea once every year. In both families, the tea is made by the retired parents from tea plantations they no longer cultivate, as a result of a policy called "returning agricultural fields to forests". This policy is applied in some provinces in order to restore forests, as in the past a few decades Chinese forests were severely encroached by agricultural fields. So the tea trees of these two families are currently growing in wild conditions, and the parents harvest leaves in spring just because "the leaves are there". I had the ambition of getting some of this tea for Life in Teacup store, not because of its "organic conditions" (although organic is good and important, it's not officially tested on this tea), but because in my past experience, some "wild" teas taste great. But eventually the tea was sold out fast and I ended up only getting a small bag to share with family and friends. 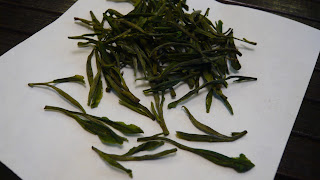 In this brewing session, I accidentally threw in too many leaves. But this tea tastes great in high concentration, without any bitterness. This tea is called "Small Orchid" partially because of its "orchid aroma" and partially because its open leaves in water look like small orchid flowers. I always have difficulty describing tastes of green tea. In Chinese tea jargon, the highest praise on a green tea is "orchid aroma". But then this is different from the "orchid aroma" of Tie Guan Yin and some other oolongs. I would say this tea has typical green tea type of "orchid aroma" and it has the taste of high elevation (it's from approximately 800m above sea level). But I know it's not effective description :-p 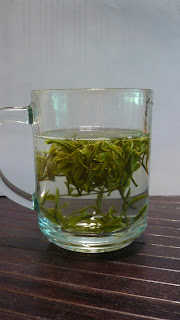 The seller is proud of the tea's taste but is so humble about the tea processing. A few times she mentioned to me that "it's just a farmer's tea" and that her parents couldn't afford the time or energy to carefully make all the leaves into perfect shape. The dry leaves don't look as well trimmed and pretty as many other green teas, but still I think they are so lively and beautiful. Then once tea leaves started to expand in the glass, they were brilliant! In Chinese green tea drinking, enjoying the view of leaves is a big part. Many top notch green teas are made in the most fastidious way and almost all the tea leaves are of same size with perfectly intact blades and buds. These tea doesn't have as perfect leaves. But I've found these little wild leaves not a bit less beautiful. 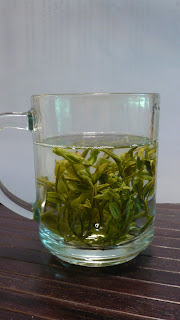 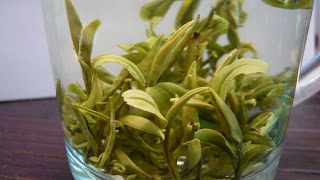 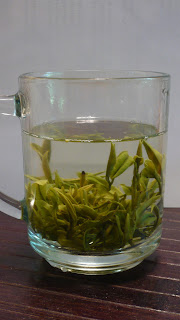 If I may assume Tong Cheng Small Orchid originated at approximately the same time period as Shu Cheng Small Orchid (Tong Cheng and Shu Cheng are two cities some 50 miles apart, and the two Small Orchid teas are somewhat similar), then Tong Cheng Small Orchid was invented in late Ming Dynasty (16-17th Century). Then it's another one of the currently existing oldest green tea varieties in China (most teas with even earlier origins changed to deviate from their original processing methods). Tong Cheng is a city of literati. Probably half of my favorite Qing Dynasty essayists (essay is a "hottest" literature form in Qing Dynasty) are either from Tong Cheng or mentored by Tong Cheng scholars. Therefore I feel it's my great luck to have this tea, the exactly same luscious liquor and same elegant dancing leaves as enjoyed by my favorite essayists hundreds of years ago.
at 11:45 AM

What a great article! I am now even more excited about getting this tea. I love reading about the history of how a tea originated and the details about how it's currently made. Fantastic pictures, too. Thanks!