Tasting note was recorded on Steepster. And here are a few pictures.

In short, I adore this tea, which had never happened between me and a shu. 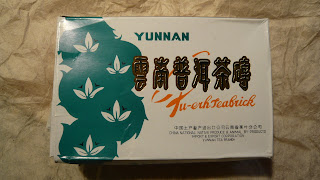 Among all the tea categories, puerh Shu is probably the one that I like the least. I occasionally enjoy shu, but had never felt the “magic” as I would find in some other teas. After trying some older shu that everybody else adores but I feel at the most neutral, I’ve kind of settled with the few inexpensive products that I can get along with, and I haven’t been trying a lot of new products recently. Generally my take of shu as a “restaurant tea”, “milk tea” and “tonic drink” may have largely held me back from exploring it as a gourmet tea.

Now here is another shu that’s supposed to be “really, really good”, according to some friends. I wondered if it would taste good to me. 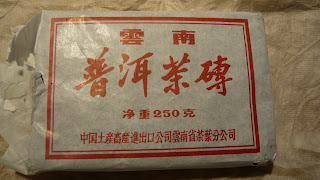 This brick is in a paper box without any information about the production date, which is not uncommon for puerh products before 2005. I got the production date from the supplier, whom I 100% trust. But in general, I believe for products like this one, people should always taste a sample before buying a whole brick or cake. Inside the box is a thin layer of paper wrap, which I had to tear into pieces to get the brick out. The brick is made with Grade 8 leaves, which are larger and older leaves with some stems. Although it was the first time I had pried off flakes of leaves from the brick, I already got a small stone slightly larger than peanut size, which of course is nothing extraordinary for a puerh brick. :-p 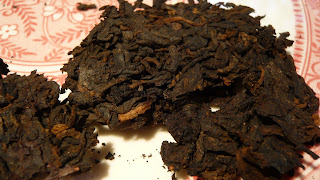 I used a 150ml purple clay teapot for this tea. Although the teapot is indeed suitable for Shu, the real reason I used it is that I thought the teapot was already “soiled” by other shu products I had before. So you know my general attitude toward Shu. :-p I used tea leaves of the size of a oreo cookie and had the first several infusions as short as possible (approximately 10 seconds). 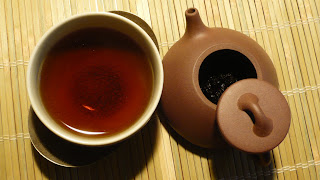 Now I want to say this is my favorite Shu so far. But please notice that this conclusion is from someone who doesn’t have much experience with lots of good and expensive Shu (many of them are so rare and legendary that I can’t manage to have them). One the other hand, I would recommend this tea to people who like black tea and/or dark oolong but don’t like Shu, because this may be the “likeable” Shu.

I like this tea first of all because it doesn’t have a hint of over-fermented (Wo Dui) taste. Nor does it have the un-offensive but rather hollow taste I often find from a Shu. Secondly, I was glad to have got some kicks from this tea. (To me, “kicks” means prominent aftertaste, especially a taste rising to nasal cavity and back of the throat.) Besides it has all the nice characters of a shu and yields many soupy and sweet infusions.

This is why I really love this tea. Would I call it a gourmet tea? Yes and no. Yes because it tastes great and it’s rare. No because look at those leaves! It’s typical of a puerh brick to have coarse leaves. After all, originally puerh brick is supposed to be enjoyed by nomads and boiled on campfire. Its charm is not elegance but unruliness. For us modern geeks, nomad life is an intriguing fantasy. Next time after my lamb chop meal, I am going to enjoy this tea and dream of the life on the prairie! :D

Shu tea - a tea haven't tried. I'm not keen on Pu-erh but Pete is. Either way, I love reading about teas I don't know well.

Thanks Gingko for the great pics too! You've certainly made me curious about this tea.

I love pu'erh tea. I can't get enough of it.

Jackie, you must come to the pu'erh side. It's good tea, and it does wonder for your stomach and digestion.

Jackie, I've had this tea for about 5 times so far and already got two pieces of small stones. Stones in puerh seem to me like lucky pennies in the hallway :P

Fox, this is actually one of the few shu puerh that I enjoy and probably the only one that I love so far. But I have yet to explore more to find more that I like :D And I agree it's very healthy to stomach.

I just purchased this very tea (although different year) and am very excited to try it! I love a good shu from time to time so I do hope this fits the bill! Thank you for mentioning this tea on your blog! I probably wouldn't have glanced at it if it wasn't for this post!

Hi Billy, looking forward to reading about your thought on this tea! I haven't been paying much attention to Shu. But many people say 7581 is a classic!