In my journey of looking for teas, I always feel grateful how lucky sometimes I am. I got this tea entirely out of luck. I was never looking for vintage oolong. Vintage oolong is just not an appealing concept to most mainland China tea professionals. However, this tea found me. It's not like any other Tie Guan Yin I had tasted before, and it definitely changed my view on vintage oolong. 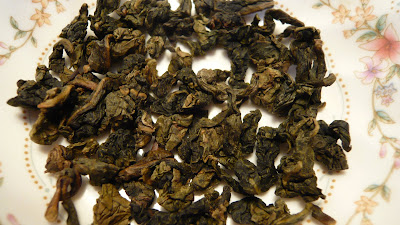 This is a traditional medium roast tea, which is very much different from the modern greener style that dominates the market today.

(A previous blog entry here provides various styles of Tie Guan Yin to compare with this tea.)
What's unique about this vintage tea is, it has never been re-roasted. I don't know how they managed to store the tea so well in humid Fujian, that the tea has never really needed a re-roast. Obviously the tea was well-sealed, and was stored in a very dry condition.
Initial flavor of the tea is very charming. Although I have had some oolongs that were described of having "honey-peachy" flavor, when I took the first sip of this tea, I immediately knew, this is THE "honey-peachy" flavor that the old tea people talk about. It is something we can barely find nowadays, because the processing of Tie Guan Yin is different in so many aspects compared with 10-20 years ago.
The traditional processing doesn't damage the leaves as modern style processing. Therefore, even in the first infusion, unfiltered liquor, there are not many broken leaf bits. 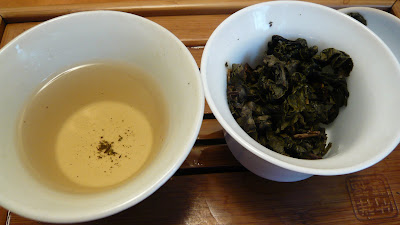 The aroma of this tea is not as aggressive as most modern Tie Guan Yin. The tea lasts just about 7 infusions, but I am sure it would yield more infusions when this tea was new. After 7 infusions, I kept brewing it for several more infusions. The flavor gets weaker and weaker. But the liquor tastes so "clean" however long the infusion time is. In modern Tie Guan Yin, low oxidation sometimes is a source of bitterness. In tradtional Tie Guan Yin, higher oxidation may take away some fresh fragrance from the tea leaves. A traditional Tie Guan Yin at the best balance will yield clean and prominent fruity aroma. Such balance requires optimal leaf type, leaf quality and a skillful Shi Fu (artisan tea worker). 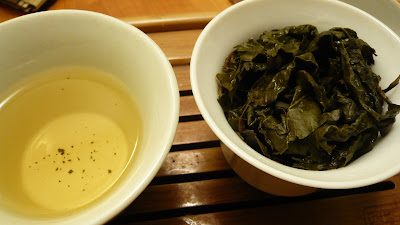 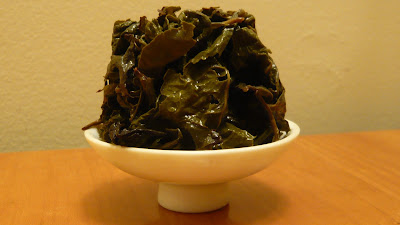 And finally, this is also what makes this tea unique. The tea leaves are significantly bigger than those used in modern days. Tea leaves in the picture were laid on a gaiwan lid, whose diameter is 2.75". 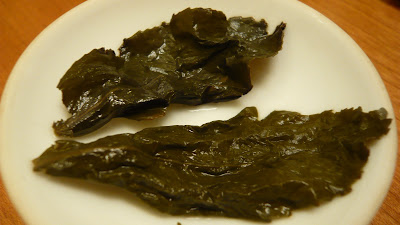 Although I don't have the knowledge to judge age of tea tree based on its leaf, a tea professional could tell the leaves were not from young tea trees. Traditionally, old-bush concept was not emphasized as much in Tie Guan Yin as in Yan Cha. However, most best tea leaves were not from the youngest trees. Nowadays, fresh aroma is valued the most in modern green style Tie Guan Yin (under the influence of Taiwan High Mountain Oolongs and Chinese green tea), and therefore, new tea bushes are valued the most in southern Fujian. High quality modern style Tie Guan Yin products are all made with leaves from new bushes. A sad result of this is, within the past 10 years, many older Tie Guan Yin tea bushes have been chopped down to make place for growing new bushes.
I know a small group of southern Fujian tea professionals who are committed to making the best traditional style Tie Guan Yin. They say, it's now or never to reserve the tradition, since the most skillful tea workers are getting in their 70s, and very few tea trees are being cultivated for traditional style tea processing.
I discussed with some southern Fujian tea professionals about this tea. None of them is a big fan of vintage tea (they do like vintage tea as a healthy beverage, but don't believe it's superior to new tea), but everyone showed interests in this tea. Here are some questions I asked and their answers. These are just these people's opinions, which may or may not represent most Tie Guan Yin professionals. (ligher-colored texts are my comments)
Q: What quality level is this tea?
Some said - very high quality from the beginning; Some said, medium to high quality when it was new (not the highest level because back then there were more tea products with solid, high quality.)
Q: Where else can I get tea of this style?
Most of them said - I have no idea, because I don't see it in market. Where did you get this one? (Interesting answer. Well, it's understandable answer, since I had never seen such tea either.)
Q: Did aging contribute much to its taste?
Most of them said - No. The tea tasted good when it was new, and it was stored well. That's why it tastes good now. One of them said - Dry storage may help to generate some good, fruity flavor in this tea.
Q: If we give a grade 100 to this tea when it was new, will aging make its quality up to 120, 150, or will aging cause its quality to fade to 80?
Some of them said - Traditional style Tie Guan Yin (both greener style and charcoal roasted) may reach a quality peak (probably a grade of 120) in 1-2 years, but may not improve more.
Overall, I feel they all like this tea very much, but they are not as amazed as I am about this tea. I guess it's because they had a lot of tea of this style when they were younger, but I never had the opportunity.
Many people would feel a little sentimental about fading of the real traditional style Tie Guan Yin. However, some are working hard on making better and better traditional style Tie Guan Yin. Their products are not exactly the same as tea of 10 years ago (because even the tea trees are not the same). But I have full confidence in their work, and it seems their charcoal roast Tie Guan Yin have gained kind acknowledgment among North American drinkers, as showed in tealogs.
http://www.teaviews.com/category/tea-brands/life-in-teacup/
http://steepster.com/teas/life-in-teacup/9712-an-xi-tie-guan-yin-traditional-charcoal-roast
This is just a start, and more traditional tea is coming.
At the end, I did stock up some  of  the 2001 Tie Guan Yin, just because it's a "why not!" Why not keep it if it's one of the very few real traditional Tie Guan Yin I can ever see in this decade. But I am optimistic about the future and expect to see more Tie Guan Yin traditional style in the years to come.
at 2:56 PM

I tried a vintage Tie Guan Yin a few months back, (I wish I could remember where I obtained it) but the flavor profile reminded me of an apple pie. Granted, the leaf looked either of higher oxidation or roast. But I quite enjoyed it! Have not had one that good since!

Yeah the traditional style Tie Guan Yin is of higher oxidation and usually higher roast. I love it's warm feeling and prefer it to greener style in winter.

I have an aged tie guan yin from jing tea shop on the way right now and i am quite anxious to review it on my blog! It is from Anxi and I love oologs from there.
Any recommendations on teas from anxi that I might look into?

Looking forward to your review on that one! There are some great tea varietals in Anxi. My favorites include Ben Shan, Huang Jin Gui (golden osmanthus), Bai Ya Qi Lan, and Fo Shou (the last two are mainly from surrounding regions). But most of them are made into modern green style nowadays. I hope to see more traditional styles of all these.

Wow that tea sounds amazing! I will have to look for it.