Discussion on Long Jing (5b) is here.

Qing Ming (around April 4) and Gu Yu (around April 19) are two important landmark days of solar terms in the traditional calendar system of some eastern Asian and southeastern Asian cultures. Solar terms document movement of the sun throughout the year, and is very important in directing agricultural activities of east Asia. Many of the solar terms can also apply to other parts of the world, especially regions in temporal zone of the northern hemisphere. Therefore I can constantly observe solar terms such as Qing Ming (marking the start of spring), Small Snow (marking approximate start point of winter snow) and Jing Zhe (marking the "awakening" of mosquitoes and bugs) in New England. Equinox days and Solstice days are also included in the solar term system.

Here is a tea harvest calendar based on the solar terms. By the way, the Major Heat (a landmark point of solar terms whose meaning is reflected by the name) of this year happens between yesterday and today (July 23, 2011). If you are in the Northeast of America, probably you already experienced it in a very deep sense.

I used the same brewing method as in discussion 5b to brew a pre-Qingming and a pre-Guyu Shi Feng Long Jing. Both are made from Jiu Keng Group cultivar, by the same family in Long Jing Village. Within a small clique of fans, people often call product series of this family by the family address, 2xx Long Jing Village.

The two teas are made by the same family. However, they were not processed in exactly the same way. The pre-Qingming one was completely manually processed, as pre-Qingming Long Jing production is very small and deserves the best attention. Most families in traditional Xi Hu Long Jing regions process their pre-Qingming tea manually. The pre-Guyu one used semi-manual processing, as it's usually of much larger production and there can't be enough tea workers to do the complete manual processing.

In all the pairing photos here, pre-Qingming is on the left and pre-Guyu is on the right. 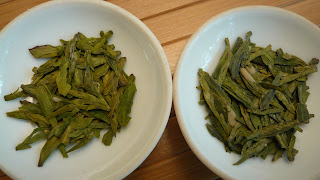 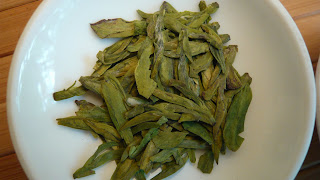 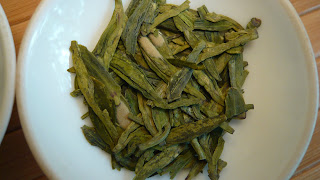 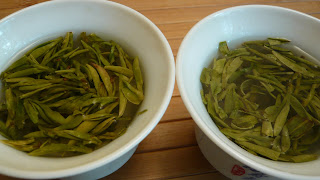 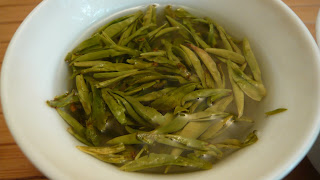 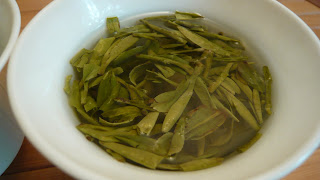 As seen in the cups, pre-Qingming Long Jing has a lot more buds than leaves. Pre-Guyu Long Jing has fewer buds and larger leaves. 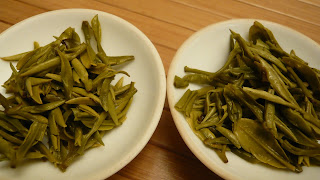 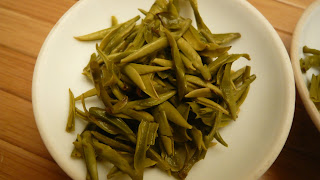 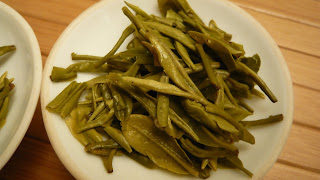 Overall, the taste differences between these two teas is obvious when you taste them side by side, but the difference is rather small when you are not tasting them side by side. Their harvests are only 5 days apart, but there was surely a lot of growth going on in these 5 days. That's why Long Jing, as many other prestigious green teas, has its harvest time documented not by season or month, but by date. When tasted side by side, the pre-Qingming displays more prominent "aroma of spring" - green, floral and uprising. The pre-Guyu has less of this green, floral aroma and its aroma doesn't last as long as that in pre-Qingming. On the other hand, the pre-Guyu has slightly heavier taste and stronger "throat feeling" (I mean, more prominent flavor sensed near the throat region). But again, the difference is small. The price difference, however, is big. The price difference, I think, is not just based on their taste difference, but largely because of the time-line labels they bear.

The difference between pre-Qingming and pre-Guyu is probably even smaller this year, as the harvest of the traditional cultivar (Jiu Keng Group) was quite late in this past cold spring. In a few pieces of field in Mei Jia Wu, there was no pre-Qingming harvest at all. In some other years, when the harvest is overall earlier, pre-Guyu may taste significantly "older" than pre-Qingming.

When I was a child, as I remember, most pre-Qingming served as precious gift (in the gifting culture in China, it's important to use the best as gift and keep the modest grade products for oneself), treat for important guests and for grandparents. For daily drink, most of us Northerners were happy enough to have pre-Guyu. In some years there was no pre-Qingming harvest (this didn't happen often, but was not super rare either), then people would think pre-Guyu was as good as pre-Qingming, as it was harvested in similar climate as pre-Qingming of other years. That was a time before market-economics and modernization.

In the past decade, I don't remember ever hearing there wasn't a pre-Qingming harvest in a year. I suspect most people would harvest the tea as early as possible (and it must be pre-Qingming to be early enough), instead of let the nature determine when start harvesting. Sometimes people value the pre-Qingming label so much and neglect other important parameters such as cultivar, producing region and, sometimes, even the taste itself. Therefore in recent years, very oddly, even in Hangzhou, the capital of Long Jing, some lower quality tea of earlier harvest date is sold for much higher price than higher quality tea harvested only several days later.

Well, I am not trying to bring us back to the days of government planned economics. Nowadays we do enjoy a lot more convenience in tea drinking. Today, getting pre-Qingming Long Jing shipped to North America is so much easier than getting it shipped to Northern China in the 1980s.

As precious as pre-Qingming is, it's not necessarily the best tea for everybody. In China, some old-fashioned tea sellers would often remind their customers that many old-fashioned tea drinkers would even prefer the pre-Guyu to pre-Qingming, because they would think pre-Guyu is more flavorful and has more "kick". I call them "old-fashioned" because the "new fashion" seems to be "the more expensive, the better" :-p In my own shopping experience, for tea or other things, I like it when sellers give reasonable recommendations on less expensive options. Sometimes I like the most expensive item the best and love to splurge on it. Sometimes I like a less expensive item the best. When I don't have to pay the highest price to get my favorite stuff, I think, the happiness doubles :-D

I wish you had posted this earlier before I purchased a bag of pre-Qingming from you guys. Still it was good. I'll try the pre-Guyu next time. :D

Chayeji, if you have stocked up enough tea for this year, next time I can send you a sample of the pre-guyu for your comparison :D

Great post; fascinating for so many reasons. I like the custom of giving the best to others!

Notesontea, thanks! Yeah I think it's a very nice way to treat friends!

I eat a lot of tea