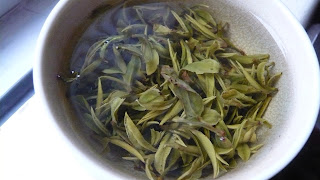 This is a Lu Shan Yun Wu from a different location than the last one. The leaves of this one look even wilder. The first day harvest leaves are usually of varied sizes, because at that time, there were leaves of various sizes, and the harvest workers would pick all leaves above certain sizes. In the harvest of later days (which still count as "first flush" if we use "international" tea terms), the size would become more uniform, because most leaves came out after the first harvest and grew for the same amount of time. The taste, in my opinion, is even better than the last one.

While drinking this tea, I thought of an article written by Wei, who is the single best source of Lu Shan Yun Wu that I know of, and is an iconic figure in Chinese green tea world. 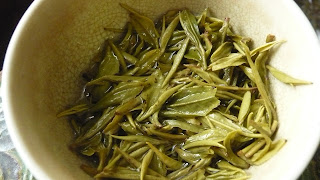 The article is about the recommended way of brewing Lu Shan Yun Wu. My method is slightly different from his but largely in agreement with his. Either his method or my method, is just "one" way, not "the" way. But in my opinion, Wei's brewing method is the "mainstream" method of Chinese green tea brewing. I didn't invented my brewing method either. Pretty much, I'm just a copy cat of the green tea drinkers before me.

People who have talked about Chinese green tea brewing with me, probably know that I'm a big advocate of brewing green tea with boiling water. It's not that I care so much about how other people brew tea to begin with. I think, what agitates me is, in America, many new tea drinkers are told by other seasoned tea drinkers that green tea "should" be brewed with cooler water, and some new tea drinkers were even sneered at when they used nearly boiling water to brew a green tea. (And there is similar phenomenon in white tea that's mentioned in this post.)

For brewing of Lu Shan Yun Wu and many other high mountain green teas, my favorite vessel is a small bowl with a wide opening. Usually I would have the water fully boiled, rinse the bowl with a little bit of the newly boiled water, throw in the tea leaves and pour in the boiling water. Then I would drink directly from the bowl whenever I feel it's ready, and add in more hot water when needed. That's basically my simple "brewing method" if it could be called a "method". There are some variations of brewing method mentioned previously. And some green teas, such as Long Jing and Bi Luo Chun do require slightly lower water temperature (water of 80C and above won't hurt them though), partially because they are made of tender young leaves, but largely because they are not high mountain green teas (high mountain green teas such as Lu Shan Yun Wu and Huang Shan Mao Feng are made of tender young leaves too but do very well with boiling water).

Some people may think boiling water is "cruel" for a high grade green tea. But in fact, high quality green teas won't be harmed by boiling water. Actually, Wei's brewing method is more "violent" than mine. Instead of using a bowl with wide opening, he prefers a tall porcelain cup which would preserve heat and aroma well. He uses boiling water, and keeps the porcelain cup lidded half of the time (I generally leave the lid off even when using a vessel with a lid). He brews his first-day harvest Lu Shan Yun Wu all year long with this method. The full version of his tea brewing article can be found here (google translate would help, but the pictures alone illustrate his idea pretty well).

Why would some people think boiling water could "ruin" good green teas then? Here are what I could think of:

Some people use very large amount tea leaves when using cooler water. And if the same amount of leaves are used for hotter water brewing, indeed the tea would get too dark and may get bitter. If the right amount of leaves are used, then little care is needed. The first picture in this blog post actually could serve as an illustration of "too much tea". Usually that amount is too much. But this tea is an exceptional tea and an exception of amount is ok. For most green teas, I would recommend half amount of tea leaves in such a tea bowl.

If the brewing vessel is very large and/or the vessel is covered all the time, there might be some "steaming" effect that causes the tea to get bitter or off-taste. This was discussed previously.

If the tea passes its shelf life and gets intrinsically bitter,  then cooler water, or even cold water may help the tea perform better and avoid the bitter taste to be infused out.

Generally, I think, the same tea brewed by very hot water and brewed by cooler water could taste dramatically differently. So it's worth trying it out if you haven't tried brewing a green tea with very hot water.
at 6:02 PM

I just spent 5 weeks in Japan, and contrary to the strict chinese-medicine dogma which states one should always drink warm/hot liquids, such that I get piping hot tea no matter how hot it was in Taiwan or China, in Japan, everything is about relation to the immediate environment conditions, such that, at restaurants--it being hot summer--I was often served chilled tea, and this was a popular and normal/preferred option of drinking even high quality tea in tea houses/cafes I went to, given the weather.

People there don't really know anything about Chinese tea or preparation, or care, really. It's all about the fresh greens on Japanese soil to them..

This is very intriguing to me. I've always been told that scalding water would indeed ruin a brew that is more delicate than say, an oolong. I'm glad you did mention the lower temps for teas like Bi Lo Chun, though, since I know it is QUITE light and aromatic with just a 30-second steeping time if the amount of leaves is 'correct'. What's interesting to note, is that when I've had 'expired' tea, it has not become bitter so much as flat. For example, a tea with nice floral tones might taste very close to tea-bag variety grocery store teas, which are usually made up of those crumbled tips in the most luxurious tippy pekoes. For my palate those would be 'plain', 'boring' , or 'standard' tastes. In other words, I generally do not throw out any of my old tea. I might keep it for those rare occasions I crave a simple, bland-ish tea-bag style tea - perhaps when I'm flu-ish and the fancier teas would be a waste on my deadened taste-buds.