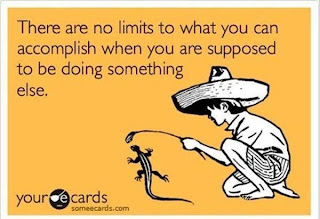 Saw this online, and this exactly suits my day. I'm supposed to catch a deadline of something else, as well as working on a few past-due tasks... yet I have been idling with tea stuff :-p

Here are a few readings that I've found very interesting. Most of them are not about tea at all. But somehow I've found them making excellent bundled readings with some popular tea discussions nowadays.

1. Here is a MIT funded randomized clinical trial that was not about any drug, but about placebos! The original article is on JAMA, one of the most influential medical sciences magazines. Interested geeks could found it on PubMed.

2. Here is a NY Times article about tea culture in a North German town. I learned of it from a teatra.d discussion and from @babelcarp on twitter. It's a very interesting and beautifully written article. I guess different people would have different takes from this article. What impresses me about this article is how one can always find new experience in tea that goes beyond one's current value system. Many people may have in mind what "is tea" and what "isn't tea", what could be put in tea and what shouldn't be put in tea, what is the "hardcore" style of tea drinking and what is the clueless style. But we all have good chances to find out all these value systems are relative and even wrong.

3. Keith Chen: Could your language affect your ability to save money?
A very interesting 15min. talk giving by Yale Univ. behavioral economist Keith Chen. I'm sure you will enjoy it - it's not only very interesting, it's also about money :-p
The question posed is very novel, and the quantitative evidence behind it is quite convincing.

This has nothing to do with tea. But it's interesting to ponder on the fact that we are being influenced by things in our live that we are barely aware of.

Probably we can see in many examples how language can also affect our tea appreciation and how we approach tea culture. What Keith Chen talks about family vocabulary earlier in this video is very interesting - the word "uncle" in English can be translated to several different words in Chinese, depending on who it refers to, whether he is uncle from your father's family, from your mother's family, older than your father, younger than your father and how much DNA you share with him! It's not hard to imagine that this kind of vocabulary system can plant family lineage values in one's mind more easily than English. And I guess this has something to do with the degree of respect or even worship to one's teacher in Asian culture (in traditional Chinese culture, a teacher respected as much as a father, and a father is the most respected member of the smallest unit of a family). So, although this talk wasn't about tea at all, it reminds me of quite a few discussions between Asian tea drinker who referred to their tea teachers for "truth" and western tea drinkers who challenged it.

Another language question I have been thinking of, is what I mentioned in a teachat discussion:

I always have this question in mind, "what's a tea master?" Is "master" an English language thing that I have difficulty understanding or is "tea master" a phenomenon in tea world? Generally I understand a tea master is somebody who is very knowledgeable about tea. But I'm not sure what's the definition of tea master and what's not (unless it's a Japanese chanoyo tea master title, which has professional certification, or a Master's degree which has academic accreditation). I've met a bunch of tea scientists who study on growing tea and biochemical research of tea, and exceptional tea workers whose skills are at the rim of extinction, and very devoted and brilliant tea producers, tea scholars, tea historians and tea educators. Rarely I heard any of them being called "tea master". I feel it's probably because the Chinese word equivalent of "master" (maestro? 大师？) would be either very serious that's reserved for people like Confucius, or would be used in rather sarcastic way.

Somehow, the word "master" makes me visualize an early 20th century British primary school teacher whipping his students :-p Is this the influence of language?
at 2:45 PM

Labels: chat, not about tea

Re "master": I'm a native English speaker, but I completely share your uneasy feeling about the word. In particular, if you spontaneously call someone else a master that's fine, but if you describe yourself that way I'll distrust you.

Oops! just corrected the spelling, and thanks for pointing it out!

So far I haven't seen anybody calling themselves "master", but I suspect some people give other people silent permission to use the term on them. Some would only passively take it. In China, a famous writer once said there are two ways to destroy people, 棒杀 (beating someone to kill him) and 捧杀(praise someone to kill him). Calling someone a "master" can often fall into the second type of killing.