This map is from one of the most popular Chinese online tea forums. Somebody from Hubei made a Hubei Green Tea Map showing tea varieties and their origins: http://teabbs.zjol.com.cn/viewthread.php?tid=189006&extra=page\%3D3&page=1

In this map, each line connects the tea name to its production region (small triangles).

It's amazing. There are quite a few famous green teas that are from Hubei, but I had never realized there are so many green tea varieties produced in this province! Seen from this map, there are about 50 green teas and a few other types of teas. Obviously it would take me many years to taste most of them!

En Shi Yu Lu is one of the few steam-green (green tea using steaming as the method to dis-active its enzymes) teas in China.

It's said to be somewhat similar to gyokuro of Japan. To me, the similarity in taste is rather remote. But considering most other Chinese green teas are not steam-green tea, the connection between En Shi Yu Lu and gyokuro does somehow stand out.

The processing method of En Shi Yu Lu is said to be closest to some tea processing method of Tang Dynasty. Again, to me, the similarity is hard to imagine. Although a steam-green tea, the style of dry tea leaf reflects strong influence of Ming and Qing Dynasties. But indeed, compared to most other Chinese green teas, this tea is probably the closest to some ancient green tea. 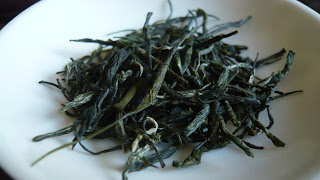 Considering it's a steam-green tea, I used the shibo as a water cooler. 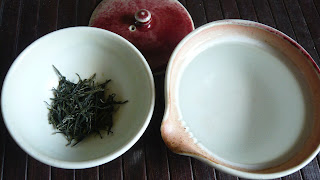 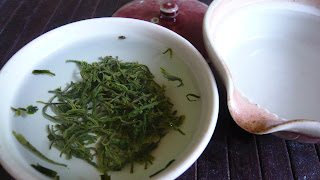 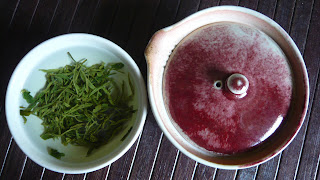 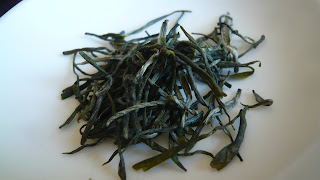 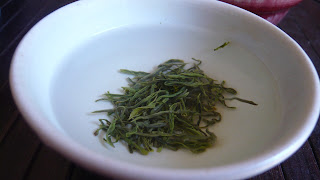 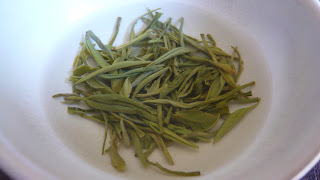 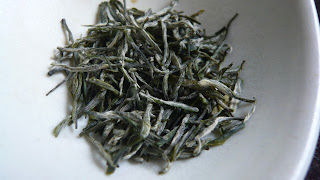 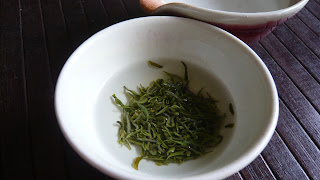 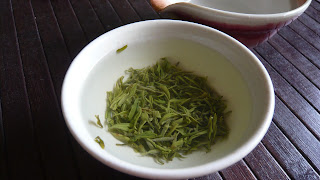 These three teas taste quite different but also share significant similarities, in spite of their very different processing methods!

Overall, I feel the flavor of En Shi Yu Lu is the most "outgoing". The flavor can be infused easily. That's probably why many people would use lower water temperature for this tea than for other Chinese green teas. It's probably the lowest water temperature I use for a Chinese green tea. (But notice "lower temperature" means different ranges for different people. To me, it means 75-85C, or 170-185F.) It has a nice, grassy sweetness that's often described as "sugarcane" flavor. When higher water temperature is used and when steeped for extended time, it releases a hint of bitterness which doesn't sustain but turns into some kind of sweetness very fast.

The other two seem more tolerate of higher temperature. But similar to En Shi Yu Lu, they are very ready to release flavors. So I used a "water cooler" and relatively low water temperature for them too. Similar to En Shi Yu Lu, they more or less have the "sugarcane" flavor. All the three teas have relatively green color in their tea liquor, compared with most other Chinese green teas. This, along with the explicit flavor, are probably due to the relatively "heavy" processing methods of all of them.

Since the three tea use very different processing methods, I guess their similarity reflects contribution of geological factors and regional taste preference. The three teas are from two Tujia counties adjacent to each other (Tujia is one of the 56 ethnic groups in China). Both are located in the same geological zone that's rich of selenium and zinc. This selenium zone extends through part of Hubei province and Guizhou province, and quite a few green teas produced in this zone are famous for their rich selenium contents. But I don't know how much selenium would contribute to the flavor of the tea.

In addition, I think the regional tea preference is correlated to the regional diet. Hubei green teas are generally of more explicit flavors than green teas from provinces like Jiangsu and Zhejiang. Unlike Zhejiang cuisine which is featured by delicate, light flavors, Hubei cuisine has various strong flavors. With a diet full of all kinds of heavy flavors, Hubei people probably would prefer tea of very prominent tastes.

I got only small amount of each of these three teas. But with the numerous green teas, I can't handle a lot of each tea anyway. I would like to include 3 sample sets of these teas in the next blog sale, for people who are interested in Hubei teas.
at 11:06 AM

I've tried two green teas from Hubei, and I like both very much: one was Rishi's Jade Cloud, and the other, Upton Tea Imports' ZG58, a gunpowder-style green tea that barely resembled other gunpowder teas I've tried.

I find it interesting that of the 9 hubei green teas in RateTea's database, 4 are from Rishi.

I also find it interesting that two of the entries are steamed green teas. I don't know if any of them are En Shi Yu Lu (I suspect at least one of them is by the appearance of the leaf and the commercial description).

This is one tea I'd be curious about. I still have a few of your teas that I haven't tried though...I'm so behind on my samples!

I really like this assessment of yours: "In addition, I think the regional tea preference is correlated to the regional diet." People that like stronger flavored food like stronger (or more prominent) flavors in their tea as well. I'll want to remember this when brewing up teas from this region. Thanks!