I once wrote about the three styles very briefly here. At this moment I realized it was 2.5 years ago (OMG!). I had always thought of further elaborating the topic and didn't realize my procrastination was so bad :-p

It would take many pages to thoroughly explain the styles of Tie Guan Yin, so I tend to get lazy and over-simplify them :-p

I made a few pictures and a chart about the styles a few years ago and somehow didn't feel like to get into the geeky details. So I will try to make this short and brief :-)

The picture can be clicked to enlarge. 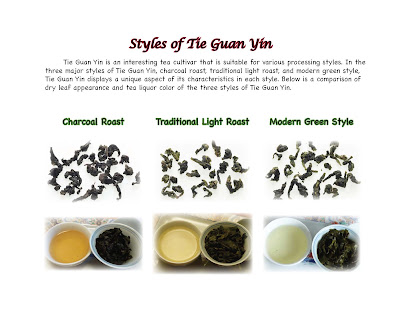 Here I would like to emphasize the three major styles because each has its own significance. They are different in quite a few ways. But I would try to summarize their differences very briefly as following:

* Modern Green Style: light oxidation, roasting to dry, and no more roasting once the tea leaves are dry.

Next I will explain why I think each of them is significant in Tie Guan Yin family.

a. Why many people love it?
I think this has to do with the cultural context of tea drinking. Modern Green Style of TGY was developed under great influence of Taiwan High Mountain Oolong. Many TGY factories in Anxi and other counties of Fujian have invited Taiwan tea professionals to direct their production, and the modern TGY techniques are largely from techniques of High Mountain Oolong.

The development of Taiwan High Mountain Oolong deserves a separate full discussion. But in short, with modern green technique (in contrast to traditional Taiwan oolong technique), people found the superior fresh taste of tea leaves from high mountain ranges could be expressed to the greatest degree. Such fresh floral, vegetal, buttery (and much more...) tastes were rarely found in either green tea or other oolongs. The heavenly tastes of High Mountain Oolong also helped Taiwan Oolong win its international fame. The international acknowledgement started from Japan. This was not surprising, because Japan is a big tea country, and a big green tea country. I believe their appreciation of Taiwan High Mountain Oolong had a lot to do with the context of green tea culture.

Then, both the wonderful tastes and its market success made Taiwan High Mountain Oolong very influential to tea farmers in Fujian. In my impression, among all Chinese sub-cultural groups, Fujian people (or Hokkinese, as sometimes referred to in English) are some of the most creative, adventurous and business-savvy. They are good at riding the trends of the era and grab opportunities to create their own trends. It took Fujian farmers just several years to create Modern Green Style TGY based on learning from Taiwan tea professionals.

The reasons why people like Modern Green Style TGY are somewhat similar to the reasons why people love Taiwan High Mountain Oolong (but there might be a bunch of other reasons too... green TGY lovers please feel free to share your reasons...) And the reason why green TGY succeeded in China was somewhat similar to why Taiwan High Mountain Oolong succeeded in Japan - it faced a market dominated by green tea lovers.

The success of Modern Green Style TGY in China was quite amazing. The business talents of Fujian people were also fully embodied in this process. Besides, Fujian government (which I think is one of the most efficient local governments in China) was actively involved in commercial promotion of TGY, with all its lobbying power and political network.

b. Why many people dislike it?
I personally like traditional style of TGY much more than the modern green style - but I'm an omnivore :-)

I can somewhat understand why traditional style lovers dislike the modern green style. Some of them would feel green style tastes like putting perfume in your mouth - however fragrant, it's not pleasant.

It might be a little too subjective to say traditional style TGY potentially has more complex and soul-touching flavors than modern green style TGY. But an interesting phenomenon I've observed over years (not backed up by true data analysis though) is, many modern style TGY lovers would gradually move toward a preference of traditional style TGY, but the opposite rarely happens.

I don't think either, that TGY farmers should be blamed for making a lot more modern green style TGY than traditional style. They follow the market trends, which are affected by tea drinkers, including you and me. If you and I are not buying tons of traditional style TGY while other people are buying tons of modern green style TGY, why blame the farmers for catering to stronger purchase powers?

In the past thousands of years, in China, green tea was the love of the nation. Even today, it's probably still the favorite tea in general. But it's no longer the sole dominant tea category in China. In the past, in most provinces in China (with exceptions of a few southern provinces such as Fujian and Guangdong), it was almost a common belief that "green tea is the best tea." People almost took it for granted without challenging the thought. But indeed it was the typical subjective, hierarchical way of thinking. Many people thought so only because they were drinking green tea all the time and weren't exposed to a lot of other types of teas. Only since 1990s, TGY, more specifically, Modern Green Style TGY has grabbed large portions of Chinese tea markets, and virtually changed people's way of thinking. If TGY hadn't done it, probably sooner or later, Wuyi Yan Cha, puerh, or some other tea, would challenge the green tea dominance. But TGY did it the first and the fastest.

Many people far away from oolong production regions, my mom included, thought they had experienced the finest teas (aka Long Jing, Bi Luo Chun, etc.) in their lives, but were suddenly wakened by TGY (at that point, Modern Green TGY) and realized there is actually a whole new world out of what their previous tea world. My family clan is mainly located in Beijing. My mom started drinking oolong in her 50s, so are many of my aunts and uncles, so are families of many of my friends from provinces across China. Once getting started by Modern Green TGY, these old new drinkers would soon fall in love with some or many other oolongs, reds and other teas they didn't think of exploring before.

Oh well, I guess I just can't keep it short :-p  So I will take a break here and write more about traditional greener style and traditional charcoal roast later!
at 9:27 PM

Tie Guan Yin is a unique tea with an aroma of leafy mint and even last longer than other teas. I've tried another tea which have same quality but a different aroma and taste. I found this Tulsi tea which is found only in India. It is considered a holy basil on their ancient health system. I think you may try this one too?

I loved your post! I am a huge fan of Oolong tea. It is such a peculiar type of tea and extremelly healthy!

I've tried a couple of oolong teas, including Tie Guan Yin and it is really good!

It's delicate, smooth and fragrant and I often take it during the day, to give me energy or whenever I experience digestive problems, as it dissolves excess acidity and improves digestion.

Moreover, it reduces bad cholesterol and the risk of suffering from cardiovascular diseases.

I am a big TGY modern fan as well, but I don't think that people should discount the more traditional types either. Typically I prefer the modern version in the spring and summer, moving to more fully oxidized versions as the colder weather sits in. I do also enjoy some of the high mountain style Taiwanese wulongs as well, and there are certain similarities I would agree for sure. However, I do find that the TGY is less vegetal, more floral, and makes for a more suitable everyday tea for me. I usually save my Taiwanese wulongs for when I can really sit for a while and savor them! : )