Because of my own physical conditions (I think I'm the slightly "cold" type according to Chinese medicine theories), I have been interested in aged white tea. In Chinese medical theories, white tea has great cooling power and could be too "cold" for people who are the "cold" type (e.g. feeling cold easily in winter, having cold feet or cold back sometimes...). However, with time being in aging, white tea will become "warmer and warmer".

There is a saying that some traditional tea stores in Guangdong would only sell white tea aged for 3 years or so. But I haven't got it confirmed by more than few people. Part of my family is from Guangdong, while I myself am from Beijing. I know many Cantonese would be reluctant to drink any tea that doesn't look dark red, and meantime, I know some Northerners grown up with green tea would be reluctant to drink tea with a hint of red color. I think this has a lot to do with not only cultural aesthetics, but also regional climates and diets.

I've written about a 2005 Bai Mu Dan here. I've also tea logged a 2009 Shou Mei on steepster. SororiTea Sisters reviewed the same 2009 Shou Mei. And this tea has recently been reviewed on RateTea.com by creator of the website Alex Zorach.

2012 silver needle:
(I feel I generally like White Peony more than Silver Needle. So this year I wasn't even sure if I would still get some Silver Needle. But then I saw this Silver Needle that looks absolutely adorable. So I thought I would get some, if not for anything else, just for collecting some good-looking Silver Needle! Then after I tasted this tea, I was really glad that I had got it.) 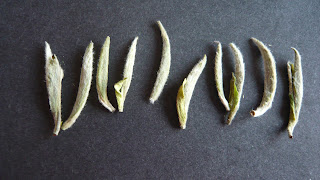 If you are interested in doing some geeky reading, here is an article on Alex Zorach's blog about definition of white tea. Here is an article on RateTea.com on oxidation of tea, again by Alex Zorach. Here is a blog I wrote about white tea. As you could see from each of these writings, white tea is a tea whose oxidation enzyme is not dis-activated. And therefore white tea is a tea more ready to change than most other teas. 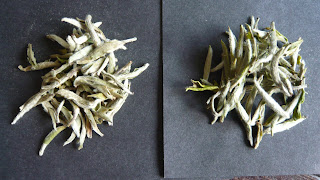 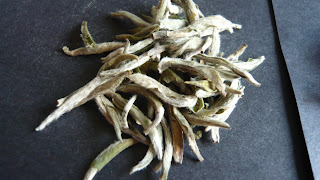 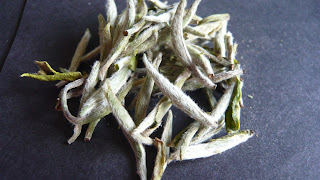 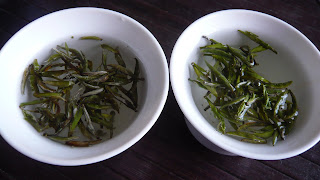 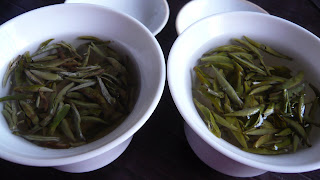 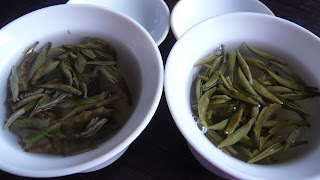 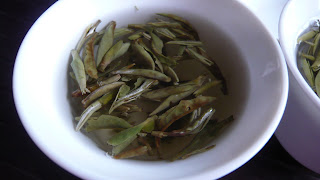 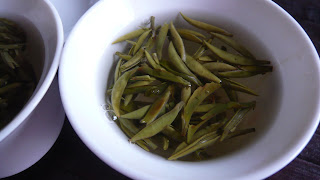 I used 1.4g of each tea in each gaiwan. The useable volume of the gaiwan is about 80-90ml. I poured in boiling water, covered the gaiwan and let the tea steep for about 3-4 minutes.

The flavors of the two are very different. They don't taste like the same tea! The new Silver Needle has a brighter and more floral flavor. The older one has a deeper tone, somewhat woody and herbal taste. Starting from the fourth infusion, it seems to me that the 2011 tea taste smoother, with less woody and more honey flavor. Meantime, the 2012 tea's floral note is not as uprising, but tuned down a bit with a brighter honey taste. Both tea can go for quite a few infusions, that is if you use hot, hot water ;-)

Overall, the 2012 Silver Needle is my favorite new white tea in all these years. But the lovely floral note in its flavor may not be the flavor to remain if the tea is to be aged for years. I guess I will be drinking more new white tea this year! The 2011 Silver Needle doesn't taste as complex as the previously mentioned 2009 Shou Mei. Maybe it's because of age. Maybe it's because bud tea doesn't age as well as leaf tea. Overall, my favorite aged white tea so far is still the previously mentioned 2005 Bai Mu Dan. It's from this guy, who now has got a "real" job and no longer sells tea.

I really appreciate your doing a side-by-side comparison of a new and a year-old tea, and then showing us and telling us about the differences. Love it. The 2012 tea looks not only a little greener, but also fluffier, and more plump.

What do the presence (or absence) of the red spots mean?