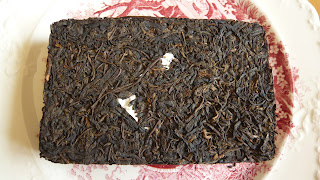 In China, many aged puerh products are emphasized to be "purely" dry storage. The "purely" doesn't just stress how dry the storage is. Most purely dry storage puerh has been stored in drier regions in Yunnan, which are not very dry regions to begin with. Some humidity data are mentioned in this post about another of my beloved dry stored tea. In Chinese puerh industry, the "purely" in "purely dry storage" mainly emphasizes that the tea has been dry stored in its entire life, without intentional or accidental dampness. By this definition, not all Yunnan stored tea can be called "purely dry storage", because there is a rain season in many regions of Yunnan and "accidents" happen. 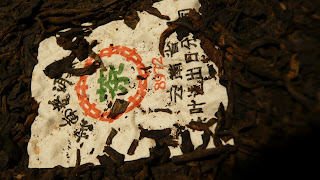 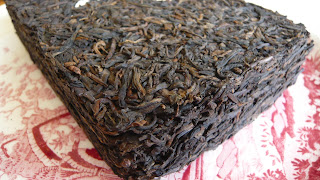 This 8972 brick, I would call it "circa 1990" because as many tea of its time, the production date is not labeled anywhere and the date document (sometimes found in a whole box of puerh bricks or cakes) is nowhere to find.

This tea is sometimes referred to as "Cultural Revolutionary Version brick", as it's made following the formula of Menghai factory's famous "Cultural Revolution brick" issued during the Cultural Revolution era. The word "Version" should be emphasized because it's not a CR brick but rather a brick that's made after the CR era following its formula. The first batch of "CR Version brick" was made in 1989. These bricks that I've got are said to be the 1989 batch. But there isn't really a way to confirm it. Besides, it's a little too convenient to say it was made in 1989, as that's the earliest possible time. But then, with dry storage, the age of a tea is actually less confusing. There is basically no way to fake the age of a dry stored tea. Any faking method would ruin the aroma and/or the outlook of the leaves. So after tasting this tea, with its leaves and aroma typical of dry storage, I would guess, still guess, but with confidence, that this tea is very likely from 1989 or shortly after it. Hence I arbitrarily call it "circa 1990". 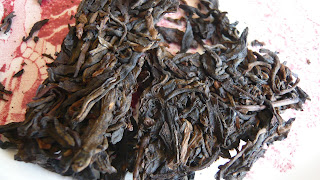 Upon opening this tea, my first impression is, it's so clean, even for a dry stored tea! "Clean" doesn't mean it won't have any stones, grain shells or hairs in it :-p So far I haven't seen any, but who knows! It feels clean mainly because its leaves look handsome and "unambiguous".

Then this impression of "cleanness" remained all the way in my drinking. At this point, the brick is tight enough to hold together but easy enough to break. So I manage to pry off leaves without many crumbs. The brick doesn't have "covering layer" (many big factory products have higher grade leaves on the covering layer and lower grade leaves inside), and the leaf material is consistent inside out. 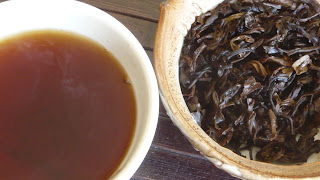 I guess, being clean isn't really an important thing in aged puerh. But I myself like clean tea. I do drink "dirty" tea sometimes, but I like clean tea! And I deeply appreciate how clean this tea is - probably not as clean as a new green or oolong, but it's really clean! For this tea, I didn't even use a strainer between teapot and teacup, which I used a lot for most puerh.

The taste of this tea is where I made my guestimation that this tea is from "circa 1990", or as early as 1989. It tastes smoother than the "butterfly tuo", the liquor feels more soupy, yet the aroma is still prominent. I guess 20 something years is the only way for the tea to get all these characters. 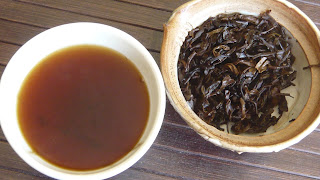 Overall, I like this tea even better than the "butterfly tuo", which I already like a lot and of course it can still further "grow up". I almost wanted to include this brick as a "concept tea", but dropped the idea because the concepts in it are quite similar to the concepts in the "butterfly tuo", which I've already included in the "concept tea" series. But probably this tea is an even stronger representative of this type.

I will not repeat the thoughts that I included in the post about the butterfly tuo. But there are a few interesting things that I want to mention about this tea:

1. I think it's quite drinkable now and guess that's the peak or near the peak stage for this tea. This is just my guess and I don't really know it. The tea still has some light bitterness background in the taste, and is not as smooth as a lot of shu puerh. But the aroma is rich and pleasant. I somewhat believe you can't have all the great things all at once. I guess (without much confidence but still an "educated guess" haha...) with time being, both the bitterness and the aroma will get weaker. At certain point, when the bitterness almost disappears and aroma is still strong, that will be my favorite stage of the tea. And I think the tea is very close to that stage now. But I value aroma very much and it may not be the preference of everybody's. If somebody values mellowness more than aroma (and I know a lot of people do), then they may have quite different definition about the tea's peak stage. I've seen people saying it must take dry storage forever (or at least quite a few decades) to make a tea drinkable. I guess those people simply have very different flavor preferences from mine.

"When would a tea reach its peak", and "how old is old" is a very interesting topic and I would like to write a different post later to compare what some tea professionals think of it (I will only go over what they say because I don't have much to say on the topic but have great interests in learning about people's thoughts of it.)

2. Overall I like this tea better than the butterfly tuo. And this tea is more "mature" than the butterfly tuo. But currently this tea is not more expensive than the butterfly tuo, which is already less expensive than many other aged teas. I'm not the one who made the prices. But I think their prices do follow the market rules. This brick comes "naked", with a standard CNNP wrapping for a whole pack of 4 bricks, but without wrapping for each individual brick. "Clothing" matters, not just in social events :-p Besides, the butterfly tuo, although rare, does have some established market among people who know about it. And so far I've only seen one batch of it from 1996. In contrast, the 8972 brick was made in different years. Late 1990s ones are not naked anymore and have individual wraps. But overall, most of them don't bear production dates. If under the same dry storage, a late 1990 version can't taste anywhere similar to an early 1990 version. But I somewhat believe prices are often made far before the tasting takes place. I think the multiple batches are confusing enough to affect the price. For collectors who buy in bulks and expect to sell them in bulk after a number of years, this tea may not be a good investment choice.

Hi GN, you can email me your address and I will send you samples of both. The 8972 will be available in store soon. The 96 Menghai tuo will not at least in near future. I somehow feel it's a good tea by objective standards, but at this stage it's not my favorite.

Yeah, I'm also curious to try this one, especially as I was thinking of previously getting some of the TW butterfly tuo!

I just finished trying this tea tonight - It has a very good aged feel and flavour, and I found it similar to the teas that I've enjoyed from the mid to late 80's. As far as it's peak...
I've had puerh from the 1960's that still retained a full flavour and aroma, and without a doubt, the smoothness was unparalleled to me at the time. I think this tea can handle 10 or 20 more years of storage and still retain all of the 'awesome' packed within those leaves. the 8972 in my opinion - is a great product! I think you've found something really good.

Bryan, thanks for the comments! I'm glad you like it. It's one of my favorite too :-D