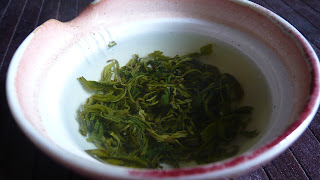 This tea was not made for Mother's Day, since obviously they don't celebrate Mother's Day in rural Anhui :-D But it was a nice coincidence that the tea was made at the end of April, shortly before Mother's Day. The tea is casually named so, because it's made by a mother, and many people knew about this tea through her daughter.

I got this tea for a few reasons.

First, it's an excellent example of inexpensive manually processed tea. It's probably the least expensive manually processed tea I could ever get. This is mainly because the "mother" who makes this tea makes it for fun rather than as a job. The tea is made with a method similar to that of the Zen Patriarch Tea, which is a gem and many grades higher than this tea. The "mother" who makes this tea is one of the people who makes Zen Patriarch Tea. The leaves of this tea are from the same tea bushes for Zen Patriarch Tea, but these are much older leaves. Nowadays, most late-season tea leaves would be processed by machine, since they are relatively cheap and not always worth manual work. So I think we are lucky to have this old lady who enjoys manually processing this tea. 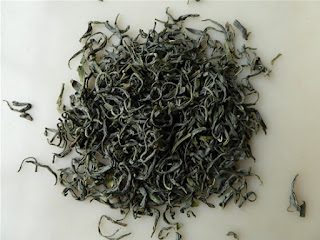 Secondly, in Chinese culture, there is great admiration of longevity and wisdom of senior people. Items passed on from senior people are often seen as auspicious. The mother who makes this tea is an ordinary woman who doesn't have a lot of money and didn't receive much education. But in her 60s, she is healthy and still working hard to take care of her mother in law, and sometimes her children and grand children as well. Being healthy, being able to enjoy working and surrounded by a nice family are some of the greatest fortune. In this sense, I think this lady is a person of fortune. This is also why we carry a small amount of her tea in our web store without a profit. I just hope to take a share of her senior fortune :-D

Thirdly, the daughter who sells this tea (who is by the way one of the several "amateur tea sellers" whom I'm going to write about) is one of my favorite green tea sources. The previously mentioned Zen Patriarch Tea, my favorite green tea from last year, and quite a few other green teas I enjoy are from her. I always love high end green teas. And because I use relatively expensive international shipping, in recent years, most of my green tea selection focuses on rare and high grade teas so that the shipping costs are more or less justified. But basically all my favorite producers have their focus on tea itself rather than grading or pricing of the tea. Getting incomes from tea is always important. But if a producer is crazy about tea, labeling or pricing never comes prior to tea itself. Many producers of the best green teas are capable of producing high quality inexpensive teas, and they would make inexpensive tea with the same sincerity they have on high grade teas. 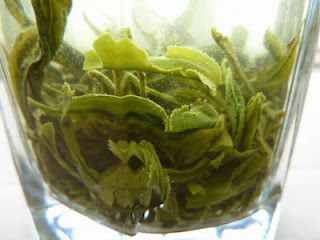 The daughter who sells this tea is from a tea farmer family of rural western Anhui. Similar to the guy who is from a Huang Shan Mao Feng village, she has also settled down in Hefei, the capital city of Anhui. She often invite her mother to enjoy the big city and have some leisure time with her family in Hefei. Her mother stays with them from time to time, but always insists on going back home when the tea season comes. Even when sometimes the train and bus tickets of going home costs more than some late-season inexpensive tea could be sold for, the mother would go home to make tea anyway, because "you can't let the tea leaves get wasted!"

In the past a few years, the daughter has sold this tea through the internet, mostly to a bunch of acquainted tea drinkers and retailers. Once her mother learned of her tea was sold on the internet instead of on a "real" market, she said to her daughter, "You must be kidding! How can you possibly sell something to somebody you can't actually see while he can't actually see what you are selling!" Later, as described by the daughter, her mother was "completely in awe of modern technology!" I've found her mother's reaction interesting and cute :-D My own mom has never learned to use VHS (till the day it was thrown out), often misuses her cell phone and often messes up with her digital TV. But she is getting her coffee through internet now :-D Starbucks is very expensive in China and isn't nearly as good anyway. With our family's miserable history of coffee drinking, her current coffee is actually the first good coffee she has ever enjoyed, although I'm paying for it and she has no idea how somebody would ship the coffee without the buyer ever meeting him to hand over the money :-D
at 2:04 PM

Technology certainly has its advantages and disadvantages. Glad to hear the 'mother' is healthy, able to work and surrounded by family.

As always, hearing the 'back story' on the tea you offer really makes getting it and drinking it a rewarding experience. I hope to be able to buy some of this tea later in the year (if it's not sold out by then).

Hi SimpliciTea, I think this tea will be sold out fast as I didn't stock much of it to begin with. But if that happens, ask me anyway, and I can probably still send you a sample to taste from my personal stock :-)

Thanks Gingko! I am just now reading this. I guess I didn't select the little 'check-box' below to get follow-up notifications; I need to be more aware of that, as otherwise it's hard for me to remember to check back ...

Thank you for the heads up, and especially for your very kind invitation just in case it did run out; as it turns out it looks like I'll be getting some with my current order. I am looking forward to trying it!