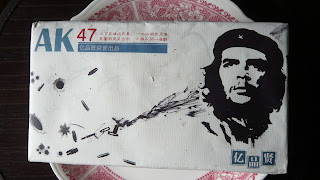 (It should be green tea season. Yet I'm still drinking shu here... Some of my new Da Fo Long Jing arrived at JFK a week ago, yet the box hasn't gone through the customs yet. Customs delay happens from time to time, and usually it's at the most 2 weeks. But when it happens to your express mail parcel that costs premium postage, it's a bit annoying. And when this kind of thing happens in the green tea season, it's a bit more annoying. Oh well, let's hope it will arrive soon! And after reading this teahat discussion last week, I just feel that, delayed or not, as long as my 5 cute teapots in that box arrive safe, I would be totally happy! Fingers crossed, toes crossed.)

How I found this tea was totally uninteresting... But I would tell anyway... I saw its flashy advertisement while casually browsing taobao. There are always tons of puerh advertising there. This one caught my attention because it has Guevara on the wrapper. I know... it's rather shallow to buy a tea based on its wrapper. I could add that a friend of mine, a long-term shu drinker also mentioned to me he liked this tea very much (both for its price and for its quality). But to tell you the truth, this friend only drinks shu, and hadn't influenced me into buying any other shu. So basically, I was indeed influenced by the wrapper :-p And I was doing the opposite of what I wrote before about not trusting small producers' shu too easily...

I always love the image of Guevara, and own a bunch of Guevara logo t-shirts and notebooks. This is probably not just based on Guevara himself and the history surrounding him. To me, he symbolizes youth, idealism, energy, enthusiasm, courage, romance and some aspect of Latin American culture that I always fancy. So basically, Guevara image is always uplifting to me. 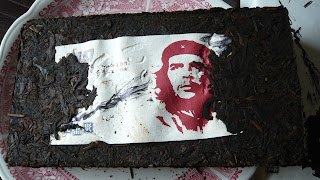 The tea is not stinky - which is always important for a shu! Besides, the liquor has a nice smooth, soupy texture. It also has some nice aftertaste, which most shu is short of. While drinking this tea, I felt very satisfied, to a level that surprised me, because I didn't expect such an inexpensive tea from an unknown producer to be so nice. It's a 1kg big brick. So I was glad that I totally enjoyed it. Otherwise what am I going to do with such a big brick! After drinking this tea for a few times, I stocked up several bricks for future drinking - to me, stocking up 1kg bricks is big commitment. 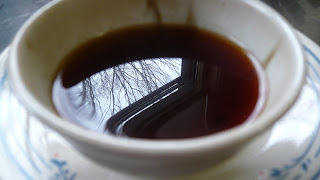 The spent leaves look quite nice too. Most leaves look like grade 6-7. On their website, the producer claimed that the amount of stems used was to make the tea smoother and sweeter, which is plausible to me. The producer also claims that they use modern methods to keep the sanitary level of their products. This tea indeed looks quite clean. 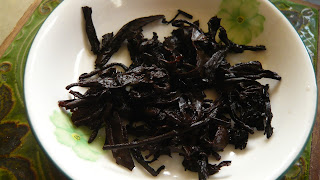 I drank my favorite 421 brick right after this tea, to experience the distance between the two. This tea doesn't have the depth and nice aftertaste of 421 brick (in fact very few shu I tasted has it anyway). But this tea doesn't taste bad even in front of the 421 brick.

With this tea, I also got a bunch of samples from the producer. So far, none of the sheng samples I've tried is exciting at all - they are not really bad and not bad at all for their prices, but I'm totally unexcited about them. But there is another shu sample that is also quite nice.

I shared this tea with my Irish roommate who had never had puerh before, and she enjoyed it very well. This was very encouraging for me to consider using this tea as an "education material" for shu. I have been looking for some shu as sort of "education material", because many new puerh drinkers have yet to taste some non-stinky shu and some even wonder if there is such a thing as non-stinky shu. But the problem is, if a tea is used as an "education material", it had better be free. Meantime, it can't be a bad tea. It's not easy to find a tea that's both worth the time and is affordable for me to give out for free. Besides, from tea drinker's point of view, I also believe an "education material" should be inexpensive, because a good and inexpensive tea will help you evaluate if a more expensive tea is worth its price. This tea is not expensive at all, yet it's somewhat interesting. So I feel it's worth distributing and I can afford it!

Besides, these a couple of days, I have been thinking, maybe giving out some tea will help me raise tea karma and promote the survival chance of my teapots from JFK :-D

So I plan to give out seven 20g packs of this tea to blog readers. The requirement is the person has made a comment on this blog before the end of March 2013 (not necessarily this post, any post on this blog is ok). Interested blog readers can email me at gingkoheight at gmail with your address. This time, I can only ship to US addresses (sorry for excluding Canadian addresses due to the recent USPS postage rise).

People who are interested yet can't get it this time, please stay tuned. I plan to put some packs of this tea in the web store and I promise to make it *almost* like free. I don't plan to carry this tea as a profitable product, because it doesn't make much sense to store and sell inexpensive, heavy, space-filling shu bricks in America. Therefore, as long as it's offered (in small packs) in our web store, it will be offered at a price close to zero.

Besides, if you would like to buy this tea directly from taobao, feel free to email me for the website of this producer. I won't be involved as a purchase agent, and don't know if they will maintain the same quality for all the batches (they have made several batches already for this tea and so far all the batches seem good). So I'm not posting the link here. But I will be happy to send the link through private messages. I do think it's worth buying from taobao if you like it. The 1kg size is a bit inconvenient for international shipping. But if you like the tea and can get good shipping rate, it could be a good deal.
at 8:29 PM

That is a very unique wrapper. I probably would have done the same thing :)