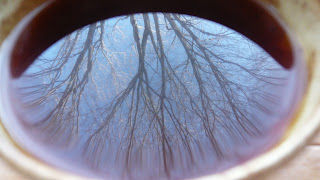 I generally don't have too much passion for shu puerh. But this CNNP 2002 "golden brick" is one of my favorite so far. My other favorite is the "spouse" of a favorite sheng of mine from Yi Ru Chang. But this CNNP 2002 is more classic and has experienced more examination throughout time. So I would give it more credit.

This brick was compressed in recent years with 2002 stock of 421s. This is where I learned of 421s, a discontinued CNNP product - and I don't get it why CNNP would discontinue such a good product while it's producing so many mediocre teas. Now I'm looking for 421s, because this brick went out of stock from my supplier.

On one hand, the name of 421s is not very well-known nowadays among consumers. On the other hand, some boutique producers (such as the famous or infamous Changtai) made their own "421" products, which more or less reflected their admiration to this tea. But none of them is the same as 421s, and almost all of them are a lot more expensive than 421s - because they are boutique teas, I guess...

Similar to other more commonly seen mark numbers of big factories such as 7542, 8972 etc., 421s is a mark number. "s" represent "shu"; "1" represent Kunming Factory, the "home" factory of CNNP. "4" and "2" indicate this tea is a blend of grade 4 to grade 2 leaves, generally quite high grades for puerh tea. Some say "1" indicates there is first grade tea blended in too. I don't know which saying is more accurate, but think that's possible too, because another loose shu, Y562, is from Kunming Factory too, yet it doesn't end with "1". Some say "4" represents a formula number. Some say "4" represents the tea was invented in 1974. And even the older CNNP people have different sayings about this mark number. I believe the saying of "grade 4 to grade 2 leaves blended" is closer to truth, because this tea is a blend, not a purely grade 2 tea. But it's highly possible that this tea was invented around 1974, and many people believe it was THE first shu ever. Yet CNNP chose to discontinue this tea... I can't think of a logic reason for that!

The package is nothing special. The "golden brick" in its name indicates it has a lot of golden buds. 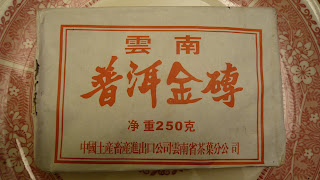 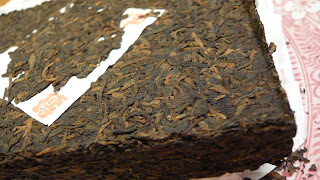 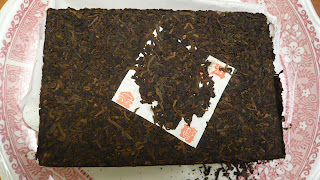 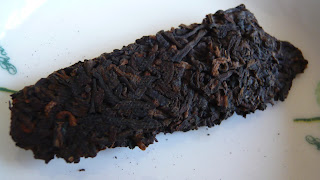 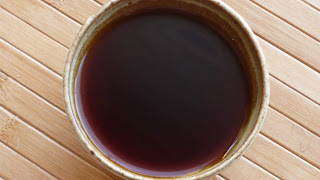 First of all, this tea satisfies my basic requirement from a shu - not stinky. (Don't laugh at my low standards... it's not always easy for me to find shu that's not stinky at all by my senses...) Furthermore, it has layers of flavors and nice aftertastes that are rarely seen from shu puerh. To some degree, this tea changed my view of shu (but still, I'm generally not so excited about shu...)

I got this tea in 2009, and was told it was made of 421s. That's the first time I experienced 421s. Shortly after, in a conversation with a highly-experienced tea professional who had quite a few years of work experience in CNNP, he said, "You kids just don't know about many good products from the old days of big factories... For example, teas like 421, 671 and 562, people don't even talk much about them these days!" He shared with us some 421 and 671 from his own storage, which was quite an eye-opening experience. That was my second encounter with 421.

There are many puerh professionals who firmly believe shu made of higher grade leaves would have better long-term outcome, while products made of lower grade leaves (such as the classic 7581) could also be great but more suitable for sooner consumption. I don't have enough experience in shu to judge this opinion. But since 421, I'm very willing to believe this claim. A few years ago, I read from a Shi Kunmu article that he found a 7262 (another shu with relatively higher grade leaves) dry-stored in Malaysia had a wonderful taste that almost resembled taste of old sheng. I thought this was a very impressive comment on a good shu. Although shu was invented to mimic old sheng, rarely anybody, whether enjoying shu or not, would think the taste of shu could be comparable to old sheng. In my value system, if a shu could be compared to an old sheng, then it has probably reached the highest state of shu. I like 7262 very well too, but don't yet have such wonderful experience as Shi Kunmu's. But since 421, I'm very willing to believe Shi Kunmu's description on his experience of dry-aged 7262 is quite fair.

Probably it's because I'm getting older now, with a weaker body system that demands milder tea... I've been drinking slightly more shu than a few years ago. I will soon write about another shu that I think interesting - and that one, I guess many people, including people who don't usually drink shu, will find it interesting :-D
at 8:59 PM

I used to drink lot of shu before, but now.. I enjoy it only 2-3 times a month. Have you tried something from Boyou TF? I recommend Boyou Chinese New Year. I liked it very much. Or Menghai Jia Ji 2001!! But you could buy a decent aged sheng for that price...

Branislav, I've never had Boyou tea but had thought this name sounded familiar. I just realized it a moment ago that one of my favorite yixing artists (Pan Bohong) also sells some Boyou tea in their yixing shop, mostly shu made by a friend of theirs with Boyou factory. So maybe I will be able to taste some Boyou tea soon :-)