a tea accidentally made 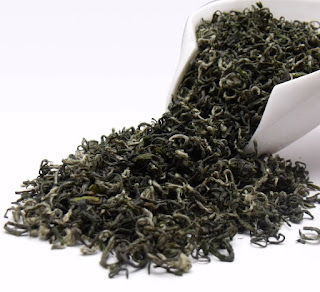 This is a Meng Shan Mao Feng (蒙山毛峰) produced in last spring in Meng Mountain (home of Meng Ding Yellow Bud, and many other great teas) of Sichuan province.

I enjoyed this tea very much and thought I had taken some photos of it, but couldn't find any. The photo here is producer's photo, which actually would be much better than mine anyway.

Among all the green teas I like, the enjoyment level of this tea is probably in the mid-range, and its price is in the low-range. Although not one of the most impressive teas in my collection, this is another very unique teas. So I thought I would be remiss if I weren't to give it at least a brief documentation.

Meng Shan Mao Feng is produced every year. But I say this tea is very unique because Meng Shan Mao Feng of this quality wouldn't be seen very often. It was an accidentally made tea! And you know I love accidentally made tea :-) Last year, during the harvest season, the weather was very sunny and warm, which was great! Then, tea farmers found they could hardly catch up with the harvest for Meng Ding Honey Dew (蒙顶甘露), another Meng Shan green tea made of the earliest leaf buds in Meng Mountain.

It was a great harvest season, and the production of Meng Ding Honey Dew was great anyway. But it was a pity that a lot of leaf buds that could potentially be made into this high grade tea grew larger than required size before farmers had time to put their hands on it. By any chance if you have wondered how this could happen - how come in the 21st Century, the harvest speed couldn't catch up with the growing speed of leaf buds -  here is why. Meng Mountain, as its name indicates, is a very mountainous region. All harvest workers must walk up and down to pick tea leaves (this is pretty much true in most traditional tea growing areas in various countries, as the mountainous regions are naturally the best for tea). And, of course, for most green teas (not just high grade ones, but most ok grades), the harvest is leaf by leaf, bud by bud, completely manually.

Last spring, I made a purchase list for green teas, and ended up buying a lot more, because there were good teas put in my hands from time to time :-) This was one of them, and the producer told me, this tea was one day too old to be made into Meng Ding Honey Dew, and therefore this tea became a Meng Shan Mao Feng, an intrinsically inexpensive tea, but the highest grade of Meng Shan Mao Feng the producer himself had ever seen.

I think this tea is unique not only because it was accidentally made due to the weather. It's also because of its producer. Frankly speaking, if this tea appears in the market as Meng Ding Honey Dew, the highest grade tea, I would think the tea buds look a bit large, but wouldn't really blame the producer for it, as it's really only a little larger than what it should be. But this producer (who is also the producer of the Tibetan Hei Cha and Meng Ding Yellow Bud I've got in the past years) is what I call a serious producer. Whatever tea he makes, he literally holds "National Standards" (tea standards from State-Owned era, with nice and thorough description of quality requirements, but aren't enforced in private sectors of tea industry) in one hand, and other ancient or modern tea literature in the other hand. If the tea is a bit larger than required, he wouldn't call it Meng Ding Honey Dew. He would call it a Mao Feng, and proudly present it as the best Mao Feng. This is no less pride than what he would have in the best Honey Dew he makes.

In my experience dealing with tea producers, what tells a lot about a producer is not just the best tea they make, but more importantly, how they handle their lower-priced tea and what quality their low-priced tea holds. Some of my most expensive teas and least expensive teas are from the same producers. I often find interesting contrast between the teas, and consistent attitude of tea producers carried by these teas.

I don't have many photos of Meng Ding Honey Dew in hands. But the base tea of this Meng Ding Snow Orchid is quite similar to it. And there is one photo in this post. The tea is very fuzzy, and looks somewhat similar to Bi Luo Chun, for which I have a few not so clear photos in this post. A market phenomenon in recent years is, Sichuan green tea is used a lot to make fake Bi Luo Chun. In order to fake Bi Luo Chun, the tea buds must be of very high grade to begin with, and some of these tea buds could have been made into high grade Meng Ding Honey Dew, which is also great but has much lower market price than Bi Luo Chun. But the best Sichuan tea producers wouldn't get involved in the shady business. This is not only because they are too proud to fake anything, but also because they truly believe Sichuan tea tastes much better than Bi Luo Chun - I'm sure not all tea drinkers would agree on this, but it's not entirely unreasonable. Sichuan green teas generally have more explicit flavors than southeastern green teas, and would be enjoyed a lot more by tea drinkers with heavier tastes.

A couple of other accidentally made teas that I wrote about in the past:
The famous bug-bitten Oriental Beauty
The Red Dan Cong - There wasn't much of Red Dan Cong in 2010 yet. But last year, I saw quite a few Red Dan Cong products in the market. So probably this is becoming a trend!

Besides, the wild oolong that I enjoy very much basically started from the year when many other teas were ruined in the tree and the tea shifu was bored of doing nothing but waiting for the new harvest.

This is the spirit of "when life gives you lemons, make lemonade!"
at 12:16 PM