This is one of my most used/abused tea utensils. I've been using it for several years - don't remember exactly how long, but much longer than most people had predicted.

This is one of the most ordinary tea trays from one of the most ordinary producers. It cost, like, $3-5 in China. I'm sure one can still find something like this today within US for lower than $20. Many people would warn against getting bamboo tea trays, because, they leaks. At certain point in their lives, they leak like there is no tomorrow! In the traditional time, all the bamboo materials for household ware would be treated, aged and weathered, so that they would be tough enough to last for decades. But nowadays few people would do this, and definitely won't do this for a $5 tea tray. But bamboo tea trays are generally cheap, and bamboo is a nice, lovely natural material. Somehow among all my tea ware, I don't have the passion to get fancy tea trays, and don't want to ship nice, heavy ones from overseas. So I got this little bamboo tea tray. I have a few other tea trays here and there. All of them are cheap little tea trays. But this bamboo one is most heavily used (or abused).

When it was new, it looked all nice... 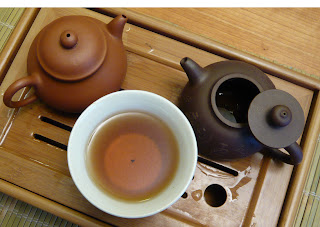 I've heard of quite a few discussions on how to protect your bamboo tea tray, like draining it and letting it dry soon after use, or giving it some oil from time to time. But I was too lazy to follow all these. I left water in it overnight all the time and rarely carefully dry it after use. And I use it heavily.

Then, not surprisingly, just several weeks after I started using it, it leaked! But then, I used some caulk/sealant material (from Home Depot, and probably the kind for kitchen sink) to seal around its inside. So the tea tray became a little ugly inside... 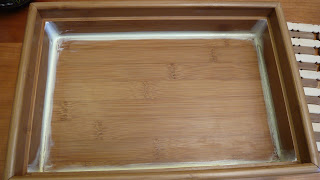 But from the outside, one wouldn't be able to tell... 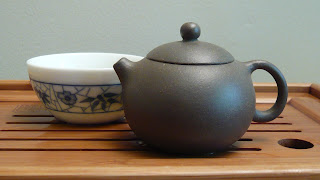 Then, a few months later, the little bamboo tea tray leaked again, and I sealed it again. The caulk-sealing repeated for a few times. After layers of sealing, as far as I could remember, I didn't have to seal it ever again!

So it kept serving me very well. It looked more used, but didn't show any sign of retirement. I used it almost every day.

But then, last year, there were half a year that I was fully occupied with moving and some other work. The tea tray was buried in an unopened moving box for a few months. Then, after it was resurrected, there were a few months that I didn't drink as much tea and when I drank tea, I didn't use the tea tray very often. Besides, those were winter months and I left the tea tray in a rather dry corner of my bedroom.

So earlier this year, when I started to pay more attention to this old friend, I found it leaking more than ever, and there were rather large splits on the bamboo pieces on its top. It was all my fault. And I feel that I almost killed it! After all these years, this was the "oldest" looking it has ever got. 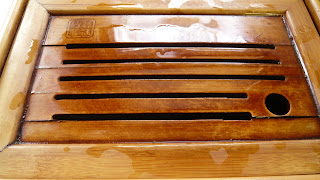 Sometimes, the only thing that can kill a tough soldier is putting him out of work!

I sealed it again. And this time I had to seal it twice to stop the leaking. Then I started using it again, on weekly basis, not daily basis though. These days I can't stay at home for most days of the week. So I would use it mainly at weekends. The splits on the bamboo will surely shorten its life. But I think I will stick to it until it literally falls apart.

When I come to think of it, it amazes me that most of my friends said a cheap bamboo tea tray wouldn't last long, yet it served me well for so many years. And when it decays, it was caused by me not using it.

I remember years ago, a group of friends and I were talking about "what's the best way to age your yixing teapots?" There were quite a few good answers and nice tips. But my favorite answer was this one from a tea friend, "the best way to age your yixing teapots, is to use your favorite teapots to brew your favorite teas." Basically, use it, and enjoy using it. Cheap or expensive, ordinary or fancy, I feel most tea ware could benefit from this one-sentence summary of "the best way."

As always, a much appreciated post. Thanks for sharing.

Thank you Sal! It's always nice to see your little fish cup :-)

Love those bamboo tea trays and love this post. Thank you.

It brings back back fond thoughts of this: