This tea was $1 sample of the month in our web store in the past two months. It was purely out of selfishness that I held back from publishing this post earlier :-p 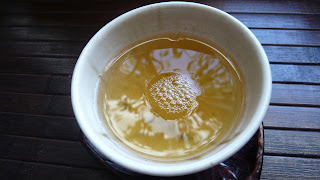 This tea is one of my recent favorites. I haven't had a lot of it yet, being cautious of having too much new sheng. But overall, my impression on this tea is, it's powerful yet not harsh. Although for a few times in conversations, I compared this tea to 2010 Zhang San (which I like very much too and showed a few photos in this post), and although they do share some similarity, the contrast of these two teas is obvious. To a large degree, the contrast in mouth feeling comes from age of tea trees (which I believe, but it's a feeling and is hard to quantify). Zhang San is from young arbor trees. This tea is from tea trees of over 300 years old. Besides, this tea is from an elevation of about 1500-1600m, which is slightly higher than the 1100m elevation of Zhang San. Interestingly (and probably not surprisingly), the price of Zhang San increased rapidly in the past three years. This is largely due to the tea quality there and widely acknowledged outstanding tea processing skills of Zhang San villagers. But the price rise has been too fast and too much, and it's probably largely because that now many people know about this village and their tea has become one of the most wanted. Currently, the market price of Zhang San young tree tea could easily go way above this Burma-China border tea (basically an unknown source to many people yet), yet I think it's very obvious that this tea has much higher value. 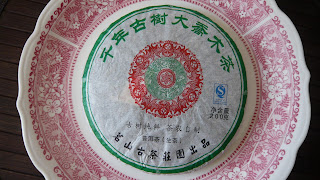 This is the kind of young sheng that makes me want to slow down in drinking, and get even slower, to experience what's the taste is like minutes after each sip and the mouth feeling many minutes afterward. 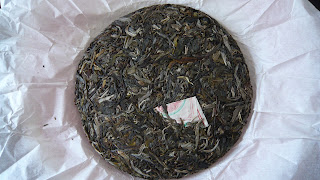 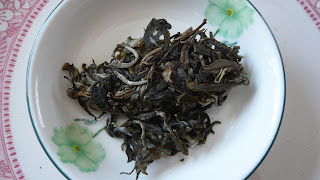 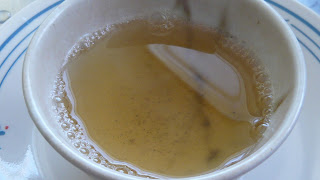 As much as I like this tea, it does have some flaws. I'm just happy that its flaws aren't what would strike my nerves. 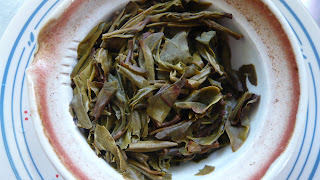 The "group photo" of the leaves mainly show their nice features. But the individual leaves photo below reflects both merits and flaws of this tea. 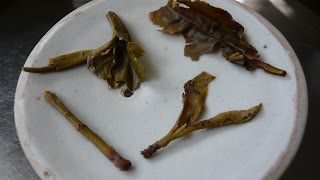 Since the tea is from a not very commercialized site and there isn't strict quality control, there are small amount of larger, broken or older leaves (such as the top right in the photo) that would have been picked out if it were in a more mature producing area of puerh. The transportation of raw tea is basically by foot which causes further crushing of some tea leaves. Later on, the crushed debris was removed through processing but some broken leaves and older leaves were left in. (Talking about by-foot transportation... it is quite normal in remote regions of Yunnan and usually even more strenuous than the Yellow Mountain village scene I wrote about in this post. But I've seen 5-year-old Yunnan boy carrying a big bucket of straws and hiked easily in the mountain, which made me feel we city dwellers were degenerative human beings...)

On the bottom right leaf, we can also see some insect-bitten spots. If we may call it a "merit"... since it demonstrates that the tree lives happily together with bugs.

It's a little ironic though, that merely 2.5 decades ago, when my grandma or mom went grocery shopping, they would try the best to pick cabbages with fewer bug-bitten holes. At that time, most vegetables in China didn't have a chance to "enjoy" the modern technology of pesticides yet, and the prettier leaves represented higher quality of the cabbage. Nowadays, instead, we would ever wonder how come the juicy, sweet lettuce doesn't have merely one bug-bitten hole, and when we see pest damages on organic vegetables, we feel as happy as seeing an old friend!

Another ironic story pertaining to this tea... *rumors* are, nowadays tea leaves from this region (a village near Burma-China border which has little reputation in puerh world) are often transported to Kokango (a Chinese ethnic region in Burma, currently famous for its ancient arbor tree puerh) to be sold as Kokango tea. Meantime, Kokango tea leaves are often transported to Bulang Mountain region to be sold as ancient arbor tea of some famous Chinese villages. When I heard of this, I could visualize busy people carrying tea from China to Burma, and then from Burma to China, back and forth... What a funny scene! All this is driven by cash, cash paid by people who care more about the title of a tea than the tea itself.
at 11:38 AM