the beauty of shu... 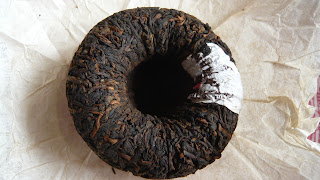 The beauty of... shu... ??!!
I can't believe I'm writing something like this. But indeed I feel I've finally tasted some beauty of shu.

In this blog (that's over the past 4 years or so), I've written about 6 shu. I enjoy each of them, from well to very much. But those are already the vast majority of all shu that I've liked. To me, they are like a small drop from an ocean of stinky, fishy, damp, basement-moldy, ammonium... types of shu! So you can tell how (un)excited I'm about shu. Usually when I recommend a shu to somebody, I would say, "look, even I could enjoy it!"

For years, I never understood what's the point of shu. My best interpretation was, people needed something mild (for the mouth feel, for the health or to go with their food...), and therefore would bear with some stinky flavors. I have almost zero tolerance of stinky flavor. So the few shu I would keep are those that don't taste stinky to me. And usually my near-to-the-best evaluation to a shu is "not stinky!" But after all, we don't have to drink a tea for its non-stinkiness, right?! I have to admit that it's relatively easy for a shu to have some good liquor texture and sweet aftertaste. But to me, that's not enough. Usually I would prefer shu that has a nice complex, aromatic aftertaste, not just sweetness and smoothness. But I'm pretty much an "aromatic" drinker for various types of teas, and other tea drinkers may not share the same preferences as mine.

Usually I don't deliberately look for shu, except for my recent search for 421 (because the 421 brick I liked very much was no where to find now). The other shu I enjoy so far were all that I accidentally bumped into.

Earlier this year, I got this 2007 Chang Tai "Gold Bowl Silver Tip", because somebody told me that I "really really have to try it." I didn't know why I "really have to try" it, since I'm not even a shu lover! But I got it anyway, because it does look like an interesting tea. It's made primarily of high grade tea bud, which, in my value system for shu, is a very good thing. Besides, it's a tea blended by the manager of Bao Lan Sheng teashop of Hong Kong, with shu of various ages and up to 20 years old blended in. In my own value system, I don't really understand what's the point to keep a *shu* around for 20 years (since it's already a shu). But I do believe this Bao Lan Sheng manager is one of the professionals who really know what he is doing. So I thought I would try this interesting tea. It's a 100g small tuo. So although it's not cheap, buying a tuo won't hurt my wallet that much. 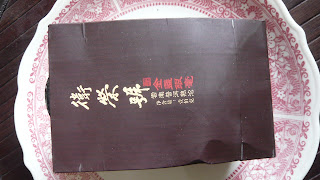 Besides, Wei Rong Hao, one of the numerous registered trademarks of Changtai, seems an attempt to attract Hong Kong and Taiwan buyers too. In addition to Wei Rong Hao, Chang Tai has a few other "Hao"-bearing trademarks such as Chang Tai Hao, Yi Chang Hao, Ding Sheng Hao... Somehow, "Hao" could make a lot of people relate to high end product - an interesting phenomenon. 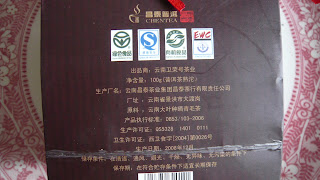 The tea has a lot of golden buds indeed, which I like. It has been dry-stored in Guangzhou, and the tuo doesn't have much of the typical shu smell.

I had expected it to have some shu smell, and thought it might need some air-out. So as soon as I got the tea, I immediately broke an entire tuo and put it in a jar. Meantime, I took a piece to brew. To my surprise, without any air-out yet, the tea doesn't taste as if it actually needs any air-out. 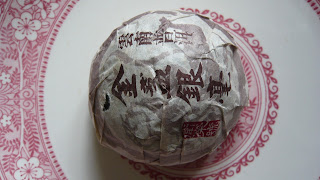 Overall, I like it very much, and it might be my favorite shu so far. At certain point, I almost felt this tea tasted like a very old sheng instead of a shu. Although shu was invented in order to mimic old sheng, before this tea, no other shu gave me a feeling of old sheng and made me forget it was a shu.

In the past, for a few times, some very good American/Canadian friends of mine told me that they thought I didn't appear or behave like a typical Chinese. Each time, my response would be like this - I paused for a few seconds, and said, "is this supposed to be a compliment???" And I enjoyed seeing them a little bit embarrassed :-p But in fact, I'm a most typical Chinese. I would tell them that I probably understand what they mean, but I would guess many other Chinese they knew were not as typical Chinese as I am :-) 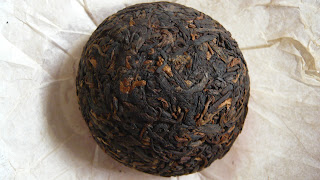 As for taste, it actually doesn't have as long-lasting aftertaste as my beloved 421 and a few other shu I love. But somehow, I love this tea very much. One thing about it that's most impressive to me is, it has a very sugary taste which is not felt by the mouth but by the throat. Maybe I could say this is the so-called "jujube aroma" of puerh. But in fact, there are already millions of "jujube shu bricks" out there in the market, and most shu that are claimed to have jujube aroma are either crappy or at the best mediocre. So I'm rather reluctant to call this sugary taste "jujube".

Overall, I thoroughly enjoy this tea. Here is a comment on this tea made by the manager of Jing Mei Tang Guangzhou store. He said, "Before experiencing this tea, you can't say you know the beauty of shu." Well, I hope I still have many years to live and chances to discover a few other good shu. But I do think his comment summarizes this tea very well.

At this moment, I feel a bit guilty that I didn't say much of good things about Chang Tai, yet I have enjoyed quite a few of their products very well. But on the other hand, if you wonder about it, I've tasted a lot more Chang Tai teas than what I've written, and not all of them are enjoyable to me. I do think that some pre-2007 Chang Tai teas are very good deal, partially due to them being boycotted in Chinese market. Some 2007-2009 Chang Tai teas seem to have very good prices, but I haven't yet tasted enough of them to judge whether they are good deals.
at 7:41 PM

Ive never found the right fit of Shu for me.

Hi CMT, have you tried Dayi 7572? You could buy a 2010 version from Yunnansourcing.com for less than $20. If you don't like 7572, you can pretty much give up on shu. Many people don't like shu anyway. I feel I like shu better when I get older, not necessarily a good thing :-p