This is not about orchid. But, several years ago, I learned very nice tips about orchid fertilization from my roommate, who is from Taiwan and is so knowledgeable about gardening, especially anything tropical. He is a tropical fish lover too and kept a big fish tank. He never used commercial "plant food", but fertilized all his plants with the tank water (a.k.a. fish feces water). He often says, fish feces is wonderful! Indeed, when I was with him, my orchids enjoyed his fish feces and thrived.

This blog is not about orchid, but about tea and poops... A Tie Guan Yin with outstanding orchid aroma cultivated with sheep droppings.

My favorite Tie Guan Yin producer is a very young guy from a Tie Guan Yin family. He inherited a lot of traditional wisdom of tea cultivation and received higher education from a first-tier technology university in China. He is always keen to integrating modern science with the traditions of tea production. He is crazy at experimenting on things and likes to cooperate with other tea guys to do crazy things.

Once I asked him what was his "secret" of making delicious tea. I have to admit it was more of a compliment than a question, as I didn't expect him to explain to me in details. But, "goat droppings!" is his answer. He said, winter fertilization is key to tea cultivation, and goat droppings is heavenly winter food for Tie Guan Yin tea trees. I was a little surprised and said, "so, that's the most important thing in Tie Guan Yin cultivation, and you just told me the 'secret'?" Then he told me that it's nothing secret. Basically many tea farmers in Fujian know it, and goat droppings are still commonly in use, yet few people would do it perfectly, due to the intensive labor and high costs involved. Only crazy people would bring "goat droppings fertilization" to an ideal level.

This year, I got this tea from their factory. It's not a routine product. The leaf materials are from their partner organic farm run by another young man who has the financial security to do crazy things without restriction of budget or profit outcome. Besides organic cultivation and generous use of traditional fertilizers, what's interesting is a lot of their fertilization is from sheep droppings that are transported by cargo train from inner Mongolia - it's like transporting sheep droppings from Wisconsin to Florida.

Why from Mongolia? A very practical reason is, Fujian is a small and highly populated province, and you can hardly collect that much sheep droppings :-p Besides, with agricultural development and higher density of tea plantation and orchards, there is even less space for goats or other domestic animals. Most other southern provinces have the similar situation. In Inner Mongolia, livestock is a backbone industry, and sheep droppings are abundant. In addition, in the north, animals are bigger and fatter, and droppings are supposed to be more nutritious :-D But anyway, I see this sheep droppings fertilization as more of an exploration than some long-term operation. If sheep droppings can demonstrate great values in promoting quality of the tea, then this experiment may encourage people to open a lot of options of organic fertilizers.

This tea, in short, is my favorite modern green style oolong throughout the years. 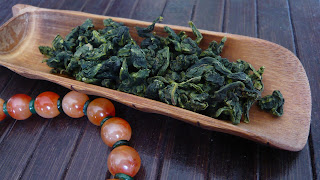 I used a small porcelain teapot to brew it and this was proved to be a good idea! A porcelain teapot or a gaiwan makes it convenient to experience the "lid aroma", aroma from under the lid of the brewing vessel. The lid aroma of this tea is wonderful. The taste is rich of orchid aroma and the buttery protein kind of taste usually found in tea from environments abundant of natural nutrients. The liquor texture is smooth and soupy. And the extra soupy feature is something in common that I've noticed from quite a few organic oolong. This may have to do with the rich pectin contents resulting from carbon nutrients in organic fertilizers. Synthesized fertilizers simply don't have such outcome because they are rich of nitrogen but short of carbon nutrients. 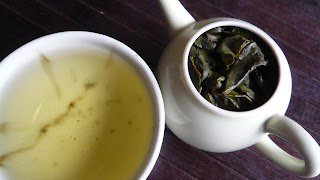 The leaves are not perfect. Due to the weather of the harvest period, this tea was harvested when leaves were slightly older than preferred. In spite of that, the tea is still my favorite modern green style oolong. And the imperfect leaf condition gives me hope that the tea could be even better in a future year with better weather conditions and better processing. 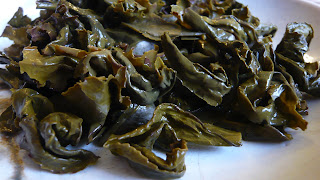 Although the leaves of this tea are not perfectly young and tender, the leaves look succulent and lively. Against the current trend of Tie Guan Yin leaf materials, these leaves are not from new bushes either.

In recent years, Tie Guan Yin lovers may have noticed that towns of Anxi County (where Tie Guan Yin originated) took turns to be the new "hot spot" of Tie Guan Yin. These towns, Gan De, Xiang Hua, Long Juan, Jian Dou... are old producing areas turning into new stars one after another. If you ever wonder why, here is an important fact behind this phenomenon: these towns, one following another, cultivated new bushes either by removing older bushes or by converting other agricultural fields into new tea plantations.

In modern green style Tie Guan Yin production, New Bush is a key word. Why is that? Because new bushes have the best-nutritious leaves to support the taste of freshness and orchid aroma emphasized in modern green style Tie Guan Yin. Then, what's wrong with old bushes? Why aren't their leaves as good? It's largely because the tea bushes don't receive the best nutrients over the years, and synthesized fertilizers can never do as well on them as the traditional organic fertilizers. Nowadays, many modern green style Tie Guan Yin are advertized as from "new bushes", or 2-3 years old bushes. But what are people going to do with them after they are no longer new? A tea bush is a plant. It shouldn't get "old" or "weak" after merely a few years. It's getting "old" and "weak" only because the original nutrients in the soil are exhausted and they are not taken care of properly.

So far, what has been happening is, after one "hot spot" has its tea bushes growing older, people's interests all go to the next "hot spot" with newly planted bushes. Then, what will happen to the "no longer new" bushes? Some tea bushes, as they get older and "weaker", would be used to make cheaper and cheaper teas. Some farmers would chop them down and make space for planting new bushes all over again. But then there are problems. The soil may have already been exhausted by the previous cultivation. How long will it take to recover? Besides, typically the new tea bushes will take in all the human labor without any yield in the first year. Then, at certain point, these factors, along with the ever increasing labor costs in China, would make some farmers think, is tea cultivation still worth it? Wouldn't fruit orchards and many other things be easier and more profitable?

The pursuit of "new bush" creates dead circles (I have to mention that it's not everybody's opinion, as many people, consumers, tea sellers, producers all included, are very enthusiastic about new bush Tie Guan Yin), because new bushes can't stay new forever, and all the endeavors on new bushes are only for short-term gain. But a different way to view the whole situation is: if soil and tea bushes are well fertilized, then old bushes are not inferior to new bushes, and then there is no need to run after new bushes. Instead of staying busy chopping down old bushes and growing new bushes, the money and efforts could be spent on maintaining good nutrients for the established plantations. There might be more input than profit in the initial years, and it may not bring in a lot of quick money, but the benefits seem long-term and sustainable. I've exchanged some conversations with quite a few Tie Guan Yin producers on this, and I think it's their vision of ecosystem and effective fertilization that convinced me this is a much better approach than the cycle of planting new bushes.

So the concept behind this tea is very simple - many other things are by far not as important or useful as, em... poops!
at 5:35 PM

Thanks for those interesting insights about Tie Guan Yin.

Do you really need an important intake of nutrients for tea farming? The biomass taken out of the field is actually quite small compared to other crops.

It's surprising that young bushes give a better tea than old trees. Maybe the fragrance is better but how about the mouth feeling?

Hi William, the older ones of Tie Guan Yin are bushes, not trees. They don't have the root system like Yunnan arbor tea trees to get nutrients from deep layer of the soil. So organic fertilization is the key. Nutrient factor is also why arbor tree puerh is better than plantation puerh :-)

I fertilize my orchids with the waste from my tropical fish tank as well .

Hmm...any crop eventually requires some fertilization if you are removing any biomass at all. Also, evergreen plants like the tea plant tend to invest more in each leaf than deciduous crops, because the plants are not used to losing many leaves in their natural environment.

From what I've read of fertilization in the tea industry though, the nutrient requirements are relatively low, and the spray-application of synthetic nitrogen fertilizers that is the norm in many types of modern agriculture, is complete overkill, leading to lots of nutrient pollution in runoff.

But I'm not an expert in this area.

I find Gingko's comments about the pursuit of "new bush" oolong not creating the best long-term results interesting. I like the idea of permaculture in general. It's totally unrelated to Tie Guan Yin production, but Makaibari estate in Darjeeling really pioneered permaculture practices, in a region and during a time period in which conventional monoculture was the norm.

I hope that agriculture across the board can move more over to this sort of system...the ecological benefits are compelling, and I suspect that Gingko may be right here that it can also be economically sustainable in the long-term, even if the up-front costs are substantially higher.

Very interesting discussion! About fertilizer, to put it short, I think tea trees can survive with little nutrients, but it takes ample and particular nutrients for the tea leaves to be tasty. It's true for a lot of other trees. Nowadays, many fruits are rather "tasteless", because they don't get enough effective fertilization. Although they receive a lot of synthetic fertilizer, most of the fertilizer spray ends up in the river poisoning the water system, while the crops are in malnutrition.

It's just recently I've realized that people should really talk more about fertilizers (and poops!), not just about tea but about many other crops. I was quite shocked to meet some young farmers who has no knowledge of organic fertilizer, and all their fertilization knowledge is from sales representatives from fertilizer companies! In the old days, even city dwellers would know a lot about plant growth through their gardening experience. Nowadays it's rather sad that some professional farmers don't know the full cycle of plant nutrients.