This Jing Mei Tang （静美堂）product, according to its owner, Mr. Huang Chuanfang, a leading figure in Taiwan puerh industry, this tea was made to salute and pay respects to Xia Guan (下关）old style iron cake with red printing on the wrap. The wrap and inner tickets are beautiful, as always. 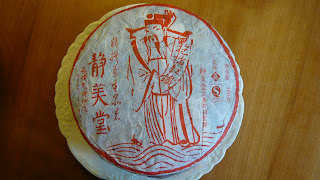 The leaves are a mixture of various grades, dominated by medium-low grades. 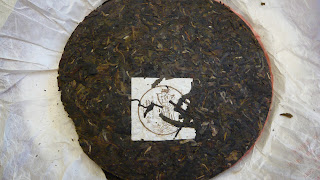 I wanted to give it a closed-up side view, because I've found it an interesting and neat technique that's used by a few puerh products that I like very much. This cake is an "iron cake", meaning tightly pressed. But the edge is quite different from the edge of tightly pressed cakes from large tea factories such as Da Yi or Xia Guan. For example, if you compare the following photo with this one (which is a Da Yi Peacock cake), you can see this one has somewhat squared edge and a flat side surface. This type of edge looks and feels tight, but it's actually not that painstaking to break the cake with a prying needle. I have seen this type of technique mainly on tea cakes made by Taiwan producers. A Yunnan native producer that I like very much, Da Dian, uses this technique on his iron cakes too. He is an admirer of Taiwan Chen Yuan Hao (陈远号), and has been telling all the people how much he appreciates tea pressing techniques he has learned from Mr. Chen Huaiyuan, owner of Chen Yuan Hao. 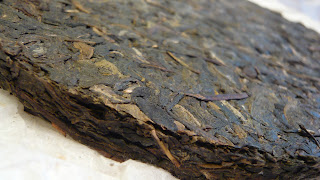 I believe the purpose of such pressing style is to let the tea aging benefit from tight structure of the cake, without making it a huge pain to dissemble the cake. The pressing style of this cake allowed me to pry off some relatively wholesome leaves. I could pry off some wholesome leaves from Da Dian's 2010 iron cakes too. I could never do the same on most other young iron cakes. 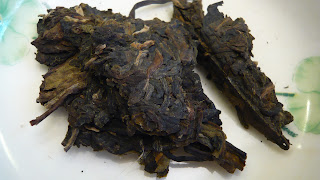 The tea liquor looks and tastes quite dark for its age - mind you, this tea has been in purely dry storage of Kunming and New England. The color tone is probably due to: (1) those leaves from 2002; and (2) the medium-low grade leaves that overall age faster than high grade leaves. 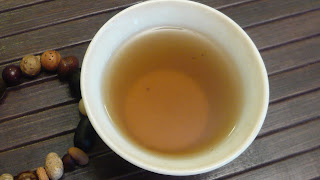 I've included this tea as a concept tea, because it was made to embody a few concepts cherished by its producer. These concepts include:

1. Medium-low grade leaves are wonderful. In puerh, high-grade isn't necessarily superior to low-grade. The grades are more of descriptions of leaf size and age, rather than evaluation on them.

But high-grade and low-grade leaves don't have to fight against each other (I've seen people fighting over the comparison and ranking, passionately). I believe either could be good, all depending on whether it's well-made.

2. Blending, the good kind, can do wonders on puerh.

3. You've got to take your time to make a puerh product. As mentioned on the inner ticket of this cake, it was made in 2007, using leaf materials from 2006.

It has been a common practice in big factories that they use leaves from the previous year or years ago. Such practice is partially out of convenience - large factories have overstock each year and will need to use it up at certain point anyway. On the other hand, in the old days, a tea was made based on how much time it was needed to make it, not based on when it should appear in the market.

In recent years, most tea cakes are made in the same year when the leaves are harvested. It's almost an unspoken rule that cakes made of spring leaves must come out before May, or asap - otherwise, some would say, how do you prove it aloud to everybody it's spring tea? But in the wake of "puerh madness", quite a few small producers have started to reflect on the tradition of tea processing, and there have been some products that are not made in a rush.

Besides the above, the pressing technique is also an interesting phenomenon to me.
at 1:50 PM