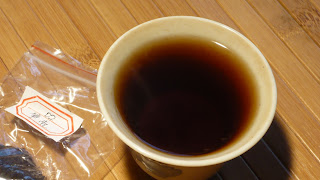 I got a sample of this from Da Dian, and here is the link of this product in Da Dian's taobao store. It's a very pleasant tea, even for me, who is not crazy about shu puerh. I think it's a very good deal for people who love heavily fermented Shu. As an independent puerh manufacturer as well as a CNNP sales agent, Da Dian has sharp eyes on puerh. (By the way I don't sell this tea, but Da Dian is a seller that I would recommend to people who shop from taobao.)

It's a great tea, but not a super unique tea. However, I still see it as a Concept Tea, because it serves very well to demonstrate a few important concepts in puerh.

First of all, stored all the time in Kunming, capital of Yunnan, this tea is an excellent example of a product of dry storage. Dry storage may not be the only good way of storing puerh, but it's one of the safest ways. It's also my personal preference of storing puerh. Probably it's because I grew up and have lived all my life in very dry regions, humidity makes me nervous and I can easily dislike tastes caused by humid storage. Very dry storage or less dry storage, it's just personal preference. But for people who are curious about it, this tea can serve as a "standard specimen" as a purely dry-aged Shu.

When I drank this tea, I constantly compared it to my 2002 CNNP French Export 7581 shu brick, which is another excellent example of purely dry-aged Shu. Both bricks have been stored dry, and their leaf grades are comparable too. But I would take Da Dian's brick as a "concept tea", because it's a dry-aged tea that has reached its peak. This leads to the second concept the tea demonstrates.

Secondly, this tea is an excellent example of a Shu at its peak. By comparing this tea and my 2002 7581 brick, I can see a big difference in their levels of fermentation, although the leaves were both from 2002. Personally I still prefer my 2002 7581 brick, which has more kick (I mean, aromatic aftertaste rising to nasal cavity), and whose "aroma of age" is more subtle. But I can imagine some other people may prefer this more deeply fermented tea, which yields liquor of richer texture, smoother, with very dark and warm "aroma of age". By comparing these two bricks, I am again confirmed that I personally prefer pre-peak puerh, and I am glad that my 2002 7581 bricks still have some years of shelf life. About his own 2002 CNNP brick, Da Dian's comment is, "It fits tastes of all the people in the world!" It may sound a bit exaggeration, but in some sense I think it's very true. This tea is perfectly smooth and sweet. One may critique on its depth or power of lingering taste, but would still find this tea very pleasant to drink.

About his own 2002 CNNP brick, Da Dian suggests that it should be consumed in few years, because with time being, the tea will step down from peak stage and will start to fade. I personally don't have the expertise to predict the shelf life of a tea. And I understand even highly experienced tea professionals bear the risk of inaccuracy when they predict the shelf life of a tea (although more often than not they are quite accurate). But I always appreciate such attempts of carefully estimating the shelf life of a tea. Nowadays many people, including manufacturers and sellers, would only tell you a puerh is "the older, the better". But in reality, no physical existence is "the older, the better". It's simply against the 2nd law of thermodynamics, one of the basic truths of the universe :-p Da Dian never hesitates to give you an estimation of the potential shelf life of a tea. His estimation is probably accurate, and probably less so. But he allows his thought to be tested by time, instead of just throwing us the simple theory of "the older, the better". That's one of the things I like the most about Da Dian  as a manufacturer. 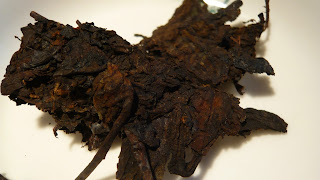 Thirdly, both this tea and that 2002 7581 brick are excellent examples of how much taste lower grade leaves can yield. This tea is made with leaves of Grades 7-9 mixed.
at 10:28 PM

Nice post, thanks. In your "secondly" statement you bring up interesting point for me. I of course know the there is not such a thing as "older=better" but usually, enjoying Phuer, I think and dream "how this tea will be on its peak?". But now I can also dream "How this tea was on its peak, before it past away...":)

Hi Petr, look forward to seeing more of your works, especially some gongfu ones and puerh ones! :-D