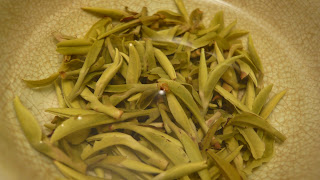 My last bowl of 2010 semi-wild Huang Shan Mao Feng, which I started to enjoy from here.

There wasn't much left so I had to use a small tea bowl. 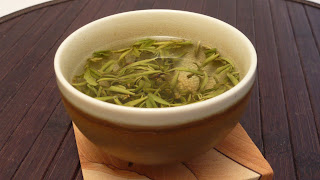 In traditional green tea business, it was taken as great pride and bliss when a tea product was sold out far before the start of the next season. Large tea houses would even use fireworks to celebrate it. Having  a tea sold out fast was interpreted as a nice achievement of the tea house. It was celebrated also because all the precious green teas went to appreciative drinkers, and no tea would be wasted by getting stale in the warehouse.

For personal collections of green tea, I believe it's also better off finishing a tea far before the start of next season, rather than having more than enough and having the tea stale and unwanted later. Wasting tea (actually wasting pretty much anything) makes me feel guilty :-p It's not just because of the cost. The great Confucius said, "Too much is no better than too little." I've found this very true in many aspects of life, including tea. Sometimes, by having too much, we may not get more happiness. Instead, that may just dilute the happiness.

It's great to have just enough green tea, or a little less than enough. (I know it's easy saying than doing...) Then the thirst for spring tea will build up in the coming months, which will make the new harvest even more exciting!
at 11:29 AM

You had sent me some of that tea, I thought it was damned fine. The leaf was beautiful. Thanks!

You're kind of spring cleaning your tea cabinets in the wintertime by drinking the tea up now :)

It's nice to have room for new ones, but a little sad sometimes when a tea you love, is gone.

Here's to the next harvest,
J.

I notice this same phenomenon in my own personal life: when tea is good, I use it up very quickly unless I make a deliberate attempt to set some aside for a friend or special occasion.