Wrestling of Dragon and Tiger 龍虎鬥 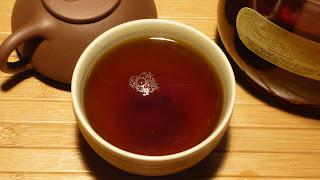 A tasting notes about this was logged on Steepster. Viewers’ discretion is necessary!

And later, I tried various versions of it!

“Wrestling of Dragon and Tiger” is a traditional way of tea drinking in some ethnic cultures of Yunnan. It’s not 100% puerh (and sometimes black tea is used instead). It’s a mixture of liquor and puerh. I’ve read about it in quite a few books but have never seen it’s practiced. So I did mine based on guestimation and imagination :-p

In my nutrition knowledge, it can be very unhealthy to take alcohol and caffeine together, when both are in large doses. But with large amount of one and small amount of the other, it seems ok. That’s why Irish coffee with Bailey is supposed to be ok, but nobody would put a shot of rum in a shot of espresso.

I thought of this exotic drink at a cold night. I have some ginger brandy as my "flu formula" and some other liquors for making cocktails. A shot of my cheap brandy always does miracle and makes my instantly warm. So at that cold night, I thought some brandy and some shu puerh may boost up some warmth. Indeed it worked perfectly! So the second time, instead of using some left over puerh leaves, I used some newly brewed puerh to get more taste of tea. And I tried a third time with Yunnan Golden Bud. Besides, I cut down the amount of alcohol. In the initial taste, I said, "When made a warm drink, everybody should cut off half of the amount of alcohol that she usually feels comfortable with." And later I thought, it should be cut down to 1/5 or less, since the alcohol rises with hot steam and gives you a light drunk-feeling very efficiently!

Here is my notes from the first drinking - The light drunk feeling came before the taste of tea. Besides, I did get peanuts and chocolates right next to me, in case I would feel the drink burning my stomach lining (luckily it didn’t). The steam of alcohol rushed through the throat as well as the nose. Then the taste of tea kicked in and lingered around. That’s the way to get both tea drunk and alcohol drunk with just one bowl :-D

Here is a record of what I did with Yunnan Golden Bud and rum.

First, I use the lid of the rum bottle to measure 1/2 to 3/4 lid-full of rum, and put it in my small chawan. According to the books, it's always crucial to add tea into alcohol, not the other way around. That's very reasonable, because alcohol is lighter than water. If alcohol is added on top of tea, it all floats on the surface and you are very likely to get drunk, as well as a big hit on the stomach. 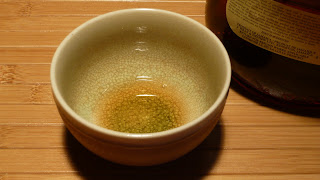 Then, I used hottest possible water to brew some strong tea (ideally the tea should be brewed by boiling in water on fire). And then the tea was poured into the chawan. Then the drink is ready! 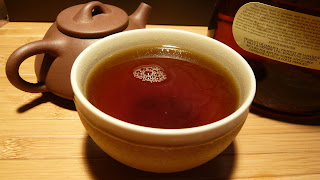 I like the name of this drink. It's exactly how it feels!

But it's NOT a daily drink. Don't let them fight each other too often, or the world will be upside down!

P.S. - Since I will be in Yucatan during the holiday, now I am considering the possibility of puerh-tequila as a New Year celebration drink :-D
at 3:30 PM

Pu'erh and liquor?
"This is madness!"

You know what would be good? Peach Schnapps and pu'erh. It would be an interesting combo, with sweet peach meeting earth and wax.

Yeah that's a little crazy :-D I was also wondering about a phenomenon - it seems traditional puerh drinking regions/cultures were also alcohol-loving ones :-o

I do like Irish coffee; I read recently about alcoholic "energy drinks" which were actually banned or restricted recently in the US. There's a good NPR podcast (with transcript in case you just want to read) on this. They can be extremely dangerous because the caffeine perks people up so they don't realize how drunk they are.

But I think tea is really different...hardly the super-caffeinated, sugary-excess that is a modern energy drink.

Yeah, a lot of caffeine mixed with a lot of alcohol could be dangerous. Besides other detrimental effects, caffeine can drive alcohol into damaging the liver, while normal amount of alcohol will not do it by itself. I guess the problem of many commercial energy drinks is they are fully loaded with everything, and they always come in large volume.

I didn't know this was an actual 'thing'. I enjoy the taste of tea mixed with liquor, but I've only tried it as an iced tea drink, never hot. The buzz would likely be pretty different.