The tea is from Meng Mountain (production region of Meng Ding Snow Bud and some other famous teas). The tea is a newly designed scented tea, however the processing procedure is inspired by and largely follows traditional method. In fact, in Chinese tea market, traditional scenting with real flowers/fruits is still seen by most producers and buyers as the only acceptable way of making scented tea.

I was lucky to have got a small sample of this tea from a supplier, as 2010 is the first year this tea has arrived the market, in very small amount.

The green tea that serves as a base in this tea is made in the mode of Meng Ding Gan Lu (a historically famous green tea produced in Meng Mountain), whose fuzzy structure can better absorb any fragrance than Meng Ding Snow Bud. 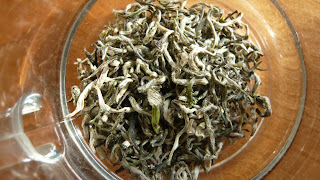 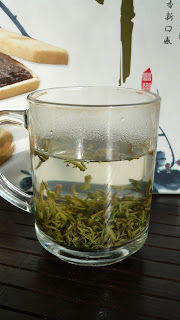 The tea is very fragrant and sweet. One important thing I've learned from this tea is, now I know exactly what "orchid aroma" is. "Orchid aroma" is a very important descriptive term used in Chinese tea jargon. The orchids many Chinese Southerner are familiar to are supposed to be fragrant and sweet, but with smaller flowers, unlike most orchids we see in market with more showy flowers but little scent.

As a Northerner, I didn't have much clue about the real "orchid aroma". I see it again and again in tea books, but I've never tasted an orchid flower. I understood "orchid aroma" as the good aroma in many teas, only at the conceptual level. Since this tea is scented with orchid, it gives me a good idea what "orchid aroma" is. In the past, I had "orchid scented" teas a few times from Asian groceries. But they were not up to the level of fine tea and I could hardly recognize any aroma from them. This tea has very intense aroma and the aroma does resemble what I've experienced from a lot of high quality green tea which were not scented at all. The aroma is just amplified in this tea due to its scented nature. Now I know what "orchid aroma" is. And now I know my favorite Orchid Fairy Twig does have the typical "orchid aroma", and the Yong Xi Huo Qing has some "orchid aroma" too! And the lovely Tong Cheng Small Orchid, it's not called orchid just for the outlook of its spent leaves! This is very enlightening experience to me, because no description or learning through other ways can replace tasting.

This also makes me think again about many people's view toward scented tea, as discussed by Alex Zorach and me in the past. I am sure there are other tea drinkers who talked about this topic too but can't get all the relevant articles off the top of my head. These days, it seems that I see more people who look down upon scented tea than who appreciate it. I believe it's largely because of the large amount of poorly made scented tea in the market. If seeing from the inner quality of various types of tea, I don't think scented tea should be considered as an "inferior category". Not all the people would like the floral fragrance from scenting. I personally drink a lot more unscented tea than scented tea. But if a scented tea is well made with high quality tea and flowers, it's excellence is undeniable. There is good tea and bad tea. There is well made tea and poorly made tea. Any tea can be good or bad, well made or poorly made, whether it's a jasmine green or a Long Jing.

Traditionally orchids have been adored by Chinese literati and admired as a creature with noble virtues - because naturally they grow in the mountains, not requiring much nutrient or care. Their pure white florescence, implicit yet long lasting aroma and simple living conditions are seen as symbolization of hermit life, which is the ultimately ideal life in eyes of many Chinese literati.

Together with plum flowers and chrysanthemum, orchid is one of the favorite flowers used in traditional Chinese poems and paintings.

This is one of the best valued orchid paintings of Zheng Banqiao, a great poet and artist in Qing dynasty. 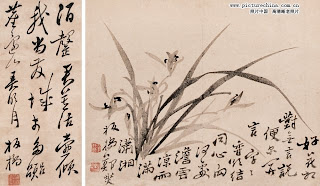 The man who invented processing procedure of Meng Ding Snow Orchid, He Zhuolin, was inspired by an old painting of orchid and tea bush growing together. Orchid and tea plant are both seen as "noble plants" in Chinese culture. There is some connection between people's love of tea and love of orchid.

I am very excited to experience the physical, not just conceptual, resemblance between green tea flavor and orchid flavor. It's very possible that Chinese people's love of orchid has greatly influenced processing of even non-scented tea, so that the green teas with "orchid aroma" has been the most adored and highly-regarded green teas in, at least, the past a few hundred years.
at 1:09 PM