a small teapot that changes it all

A few months ago, when Steepter's Select (which is not available now) had this cute little glass teapot from Samovar Tea on promotion, even I almost wanted to buy one. I said "even I" because I love yixing and porcelain teapots a lot more. But for a moment I was totally attracted by the little glass teapot. Small glass teapots are all cute! The teapot itself was not new to me. But I have to say, Samovar presented it in a very lovely way! It was on promotion with their Four Season oolong, which makes perfect match with the 4 oz. glass teapot.

Later, I was very grateful to see some tea drinkers mentioning that they used Samovar's 4 oz. glass teapot to brew some oolong from Life in Teacup, and enjoyed the tea much more than when they brewed the tea less gong fu style. I was very grateful, because I myself could never make such a positive influence. People were drawn to the cute teapot not just because of Samovar's reputation, but also because of their successful presentation of the product. When I went through the product web pages, I enjoyed watching the video clip which demonstrates using the cute teapot for gongfu brewing of oolong in a very beautiful and simple way. The 4 oz. little glass teapot is indeed a very good start point for people to use gong fu style. It's elegant but not as complicated as yixing teapots. Besides, its transparency provides a great view of tea leaves. The pairing up of Four Season and the glass teapot in the promotion was also very smart. As many other greener oolongs, Four Season yields much more in gong fu style than in other styles.

I have always been a fan of Kamjove travel gong fu teapot. Kamjove was originally a manufacturer of electric pumps and compressors, which are still a big part of its production now. The company is located in Chaozhou, where everyone loves gong fu tea. The CEO of the company is an enthusiastic tea lover. His love of tea drove him to develop product lines of Kamjove tea devices, including several dozen various models of travel gong fu teapots and electric kettles. I've found it interesting that after becoming a large mechanic manufacturer and a millionaire, the guy isn't just satisfied with collecting some expensive traditional tea ware. Instead, he would like to make some modern, geeky tea ware himself. A typical engineer! And I think he is a savvy business man too. Their tea devices turned out more famous than their mechanic devices. After all, if 1 in every 10 tea drinkers in China uses a Kamjove teapot (and break one from time to time), their sales figure will be huge. I, as a tea drinker, have owned a few of them, and sent out several of them as gifts. I don't like using electric kettles. But I know many people using Kamjove kettles too.
The one I previously used looks like this. 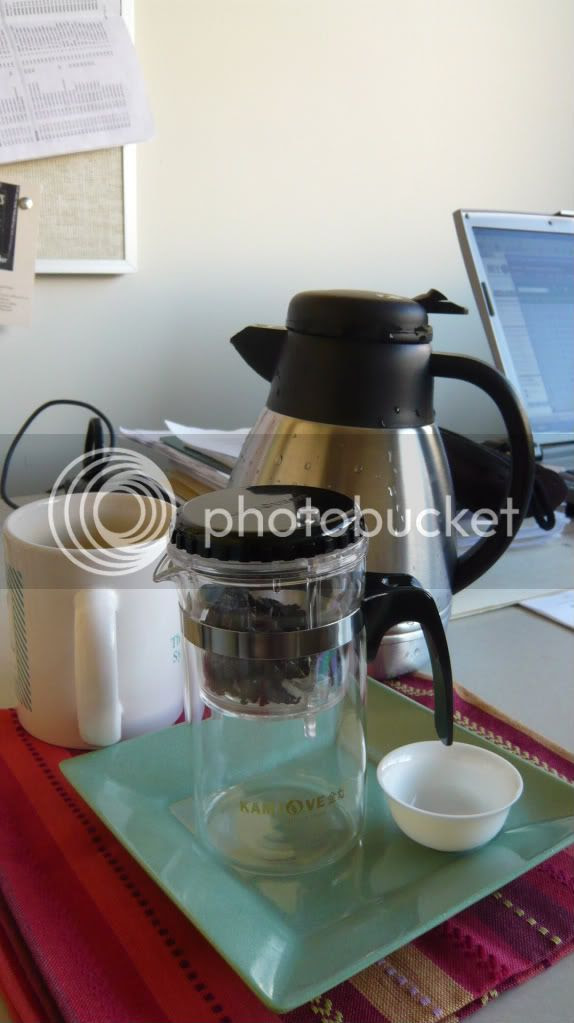 I've found its size (120ml infusion cage) perfect for gong fu style brewing. It strains water even faster than some faster-straining teapots. Besides, sometimes I would use its glass mug alone for green tea. I loved this teapot and once gave a same teapot to a friend who is a Chinese artist. Later he told me that at the beginning he didn't want to accept the gift at all (I was like, "what!?!") because it looked too geeky for a teapot. But he admitted that eventually he found it very convenient and lovely.

Later I switched to the one in the earlier photos. It's slightly larger (140ml) infusion cage). I like the smaller size and the slim look of the older one. But when I used the glass mug for green tea brewing, at the end of the brewing, I found it hard to reach the bottom of the slim mug to get spent leaves out. So I like the stout shape of the new one better. Besides, the new one has an infusion cage that can be interlocked with the glass mug, which makes it more convenient to carry the teapot around in one piece.
at 11:17 AM

It’s good to see this information in your post, i was looking the same but there was not any proper resource, thanx now i have the link which i was looking for my research.
Photo mugs