Tasting notes on this tea was posted on Steepster.

Puerh is probably already the tea category that's easiest to be tracked by companies/producers. However, big factory puerh is only a small part of the scene. I hope I am not messing up Steepster's system by putting up a lot of tea products made by "unknown" :-p

It's a tea sample. Normally I would drink a 1-year-old sheng only when it comes free :-D But actually this tea is very drinkable and not harsh at all. I am glad I've got it.

I started drinking without paying much attention, only thinking I would get rid another sample. Then it really pleased me with very sugary flavor and great after taste. So at the end, I spent quite some time appreciating the leaves. 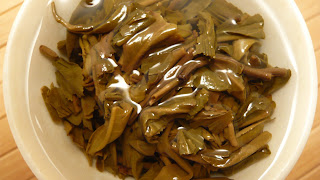 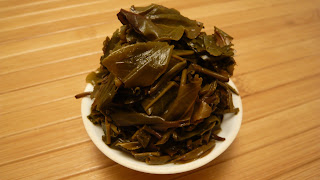 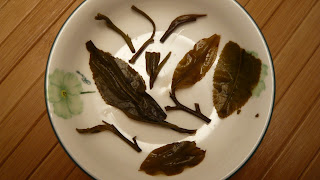 According to historical record, puerh won love of the mandarins in Beijing some 300 hundred years ago. I imagine most of them were Manchurian who had a lot of meat and dairy in their diet (isn't that partially why we love puerh today!). Even then, I have a hard time relating some puerh to tribute tea for the royal families. As for this Nan Mei tea, I have no problem imagining it as a tribute tea. Great leaves, friendly taste, lingering aroma and sweetness. The Emperor would love it!
at 10:34 AM