As many people know, "black tea" in western tea terminology is assigned to the tea genre that's called "red tea" by Chinese people. In China, there is a "black tea" (Hei Cha) category which is somewhat similar to modern shu puerh. Why is Chinese "red tea" called "black tea" in the Western Hemisphere? This has to do with the history of tea trade.

Following historical study is from the book China Oolong by Gong Zhi, one of the most renowned tea scholars in China. I found this interpretation very plausible. 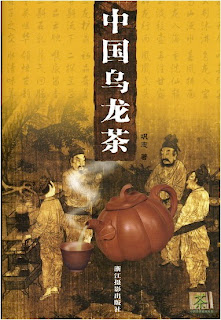 By the time I heard of this book, it was already out of shelf of most bookstores. It's a book adored by tea drinkers, especially oolong lovers, but it's not a best seller that one can find anywhere.

I was very grateful to have found full text of this book on the internet. Mr. Gong, the author, has authorized his young colleagues in Wuyi to publish all contents of this book on a few major Chinese tea social websites, without asking for anything in return. It's a fortune for many tea drinkers to get access to this book.

So here is my interpretation of Mr. Gong's study in his book.

According to historical records, Wuyi Oolong was the first Chinese tea exported to Europe in the 16th century. Large export of Wuyi tea started from the 17th century. For a long time, Bohea (pronunciation of Wuyi in the local dialect) was used as the name for Chinese tea. The name "oolong" is from Wuyi. In both domestic market and international market, Wuyi Tea was also called Wuyi Oolong. Therefore, the term Oolong Tea has been commonly used in the international market since the 17th century. The word "oolong" in Chinese means "black dragon". Oolong Tea is "black dragon tea". In the international market, people used "Black Tea", the shorter form of Oolong Tea, to refer to the oxidized tea from Wuyi. So when the term "Black Tea" was first used by Europeans, it referred to oolong tea, not red tea.

Before mid 20th century, both in China and in the international market, tea was categorized in two types, Green Tea and Red Tea, simply based on color of tea liquor. Therefore, oolong tea was regarded as a type of red tea. Even today, I know some Chinese northerners who are still confused about the tea types. They thought traditional Tie Guan Yin was a red tea and modern style Tie Guan Yin was a green tea, because in the traditional tea houses before mid 20th century, oolong was categorized as red tea.

With increasing tea export, more and more other tea products joined the tea export in the 17th century and following centuries. Some of these other products were oolong, and some were red tea. All of them were called "black tea". By this time, the "black tea" in the international market would be either oolong or red tea. Bohea became a term restrictively used for upscale oolong from Wuyi.

Later on, with large amount of Indian and Ceylon red tea entering the international market and with decreased tea export from China, international tea market started to be dominated by red tea, which would be commonly called "black tea". Therefore, today, the term "black tea" in English refers to what Chinese call red tea.

I've found Mr. Gong's study very interesting. Even in English style tea drinking, many "black teas" aren't really black in color. So I had ever wondered where the name "black tea" was from!
at 11:46 AM

You always have the most satisfying blogs, filled with knowledge.

Thanks for the info!

One of my friend recommended this to me. red tea detox has a lot of health benefits, also free of caffeine. I've tried everything to lose weight and now that I'm over 28 it's more difficult than ever to get it.
I've lost about 10 pounds so far in 2 months, works really well and I am loving the taste.