Mahei and "ancient tree" are some of the most abused puerh terms in recent years. But Hui Sheng Hao (會盛號)is probably one of the few producers that could use these words without exaggeration. Hui Sheng Hao started making Mahei tea from around 2000 and collectors started to hold their Mahei ancient tree tea in relatively large amount since 2002 - at that time I didn't even have a clue yet about the name of Mahei. The owner has access to the oldest tea trees in Mahei. So their claim of 300-500 years old tea tree age for their puerh is among the (few) most trustworthy claims about this region.

I've heard a lot about Hui Sheng Hao but hadn't tried any of their tea until recently, because it's hard to get their aged tea and I always hesitate to pay big money for newer tea, although I do believe the tea is more worthy than a lot of other new, expensive teas. This year, Hui Sheng Hao's 2003 tea reached its 10 year anniversary, and the producer released some to celebrate the (probably) first ancient tree single-region puerh with a clear history of purely dry storage. There might be a few more other small-label puerh products that are qualified for "ancient tree", "10+ years", and "purely dry storage". But I guess there aren't many overall, and barely any for such "hot and sexy" region as Mahei.

With their promotion prices, a 30g sample still cost me more than the price of some other big puerh cake... and I finally opened it with my trembling hands :-p 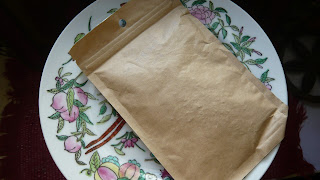 I took a small sample this time. And I did remove all the broken leaves and crumbs before brewing. Generally I'm very stingy on tea drinking. But when I'm still exploring a tea, I think it's important to judge it based on its whole leaves and not crumbs. 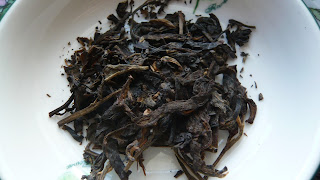 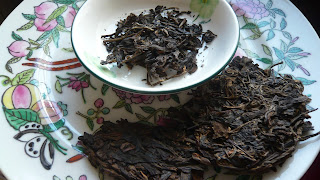 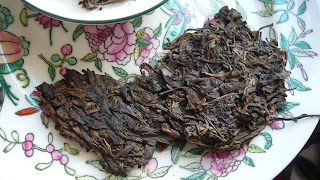 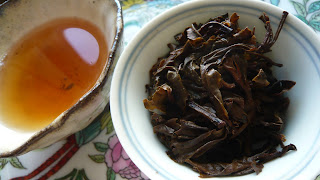 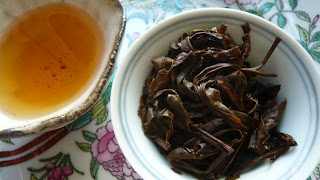 Wet leaves... I took them out to take photos while there was still daylight, and then put them back to gaiwan to resume brewing. That's how stingy I am! 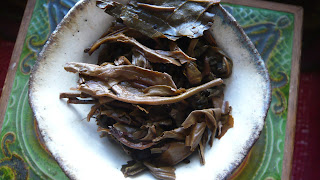 It's a great tea with not overwhelming but very long-lasting floral, honey aroma and sweet aftertaste. The leaves look juicy and succulent.

By the way, when I drink a puerh, even when drinking an outstanding ancient tree puerh, I usually don't have those reactions such as sweating like water falls, mouth flooded by saliva, or blurred mind, or floating, burping, farting... or getting hyper and crazy... (if you've read some 1990s to early 2000s puerh literature, especially those earlier Chinese puerh articles, you would know each of these reactions was from some people's serious description and I didn't make up any of them...) Maybe I'm just blunt. Maybe I didn't use a lot of tea to a stimulant level. To me, tea drinking is tea drinking. I don't get any reaction of alcohol or marijuana or 'shroom from tea :-p

Hui Sheng Hao's marketing partner is in Zhuhai, a coastal city in Guangdong. This tea was released from their Zhuhai storage. From their history, I would guess this tea was stored in Yunnan till around 2007 and then stored in Zhuhai afterwards. This tea tastes dryer than most Guangdong dry-stored tea that I've tried. There were a few big-tree teas that made me feel that even dry storage on the humid side would somehow "waste" out some aroma and unique taste from the tea. Of this tea, obviously they've been taken very good care. I got some other mid-age tea from Hui Sheng Hao's Zhuhai dealer, including the previously described CCT 2006 Yi Wu. All the other teas I got from them are generally dry-stored teas, but almost all of them had more or less more humid storage than this 2003 Mahei (and they are not as expensive either). I would imagine they have their most expensive and highly equipped storage space for their Hui Sheng Hao tea to guarantee the dry storage of the tea, while having the tea benefit from the coastal air flow of Zhuhai.

If I have a lot of disposable income, then I wouldn't mind getting a lot of this tea and use it as my daily drink. The official price of this tea is about $600-650, and there were opportunities of relatively deep discount. Thanks to the high prices of new tea in recent a couple of years, $600 doesn't sound bad at all for such a tea. And after all, it's still less expensive than a lot of Long Jing :-)

But eventually I bought an offspring of this tea - the 2010 version of this tea. 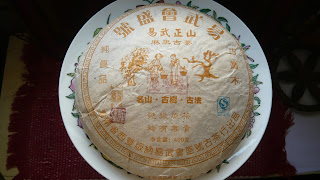 Of course it would be nice to enjoy it in 2020. But from the 2003 version, I've learned that this tea could possibly be friendly enough to enjoy before it's 10 years old. When would be a best time to enjoy it, only time would tell. That's why, as I explained earlier, if I want a puerh cake, I get at least two of them, one for longitudinal tasting and one for hoarding.
at 1:33 AM

"I don't get any reaction of alcohol or marijuana or 'shroom from tea :-p"

I remember a tea vendor once telling me that the real old single tree from them would get me a 'high' like feeling. I purchased some samples and just regular decent tea for way too high price.

I did use to make weedtea way back in the day and that did work.