I once wrote a blog about different styles of puerh collection.

With time being, I've found myself pretty much into philatelist style (and sample collecting too, for sure... my place is flooded by samples...). For tea of larger amount, I would only buy from people I'm familiar with or buy teas recommended by people I'm familiar with. But sometimes I buy teas almost as souvenirs. Even if they don't turn out super great, they are sort of the souvenir of an era. 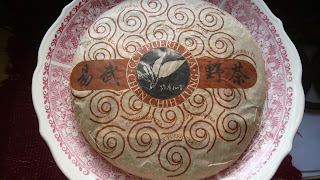 This Chen Guang He Tang 2006 Yi Wu Wild Tea, when new, didn't get super good comments from one of my puerh icons, Ulumochi.

He didn't explicitly specify the name of the tea (I guess, because he isn't a blunt person...). But I believe he was talking about this tea.

I read Ulumochi's comments long before I bought this tea, didn't expect this tea to be super good but bought 2 cakes anyway. The price was quite ok to me. Generally, my way of puerh philately is "2 cakes" - one for now and one for future observation. I think it was Schopenhauer (but I could be wrong) who said this, every book worth reading is worth reading twice. As a book worm, I've found it very true. Similarly, if I want a cake, I buy two of them. If I'm not sure, I would sample, instead of buying any whole cake. For this one, I would have bought a few more cakes if the storage condition were better but never thought of buying more than a tong.

The storage isn't exactly bad, but more humid than I would like. It's claimed to be a Guangdong natural storage (which usually means no intentional dehumidification used and is usually too humid for the taste of dry-stored tea drinkers). Some people suspect it went through Hong Kong humid storage. But I feel this tea doesn't taste that humid yet.

The cake looks like one that was stored under certain humidity but not out of reasonable range. The leaves look flat and packed, but no humidity damage. 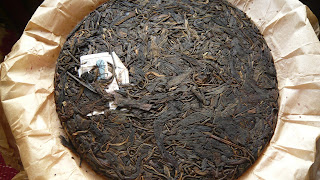 The back side of this cake looks even more humid-stored, especially in the 6-8'o clock region. 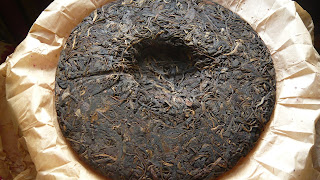 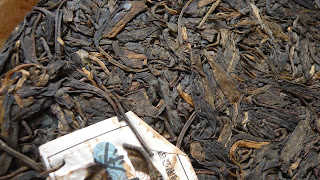 The leaves are of mixed grade, and there are quite a bit older leaves. In his 2007 blog, Ulumochi mentioned that he feels one of the reasons why the tea is not great is that the leaf grades are rather low. Indeed I feel the leaves taste short of potency. 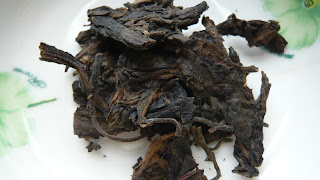 However, somehow the leaves look nice to me in certain way. I think they look quite natural and alive, although I'm not moved by the taste (still a decent tea though). It may not turn out the highest level of tea. But somehow I believe this tea wasn't made to fool people. I would consider it a tea of integrity. 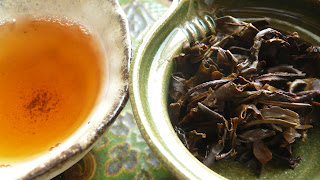 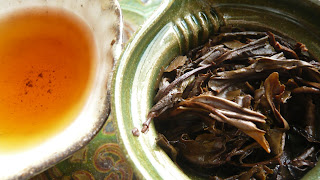 Although this tea may not be a super great tea anyway, I suspect I would love it more if the storage were dryer and more aroma were retained.

The name of the tea is "Yi Wu Wild Tea". Back in early 2000s, in puerh, "wild tea" was equivalent to today's "arbor tree" concept - basically it means non-plantation bush tea but genetically similar to most puerh products. But later on, some people indeed used "wild wild tea", which might not be of the same tea tree variety as the common puerh tea. This tea tastes somewhat like pickled cabbage to me (not in a bad way and not that sour). So I don't know if it has to do with the type of tea leaves used.

I saw this tea available at Hou De Asian Arts, and the price is quite ok in my opinion. I don't think it's from the same source as mine. But it might be even better if the storage is dryer than mine.
at 9:44 PM

When many pot friends first came into contact with zisha pot, thPurple Clay Teapot With Infuserey had some questions like: why do you want to mix sand in zisha pot? Is pure bad? Adjusted sand he orHandmade Ceramic Teapot