reunion of twins (1b) - drinking with a "baiding"

Reunion of twins (1a) is here.

Besides, there is a reunion of 3 brothers (part 1) here, if you are interested ;-)

There have been a few more reunions of other twins and brothers done recently and a few more queued up :-D

I grabbed the word baiding (白丁) for use in tea drinking from one of my puerh icons Feng Yu (or the famous PCCZ in China). I couldn't find a proper English translation for this word, and obviously google translation refuse to do it. Baiding, originally referred to a person without an official title. In ancient society, such a person was usually an uneducated person. So later on, baiding refers to an uneducated person, with a negative connotation. Its meaning is not exactly the same as "uneducated" or "illiterate". It's somewhat closer to "uncultured". Somehow this word has been used by Mr. Feng in a funny and friendly way, without negative connotation. In China, very few urban people are completely illiterate about tea, but a lot of them don't know much about puerh. Mr. Feng calls his friends of this type baiding in a jokingly way.

This time, I drank the twins with a baiding and had some interesting conversation about them. Baiding in my opinion, is one of the best photographers in Boston. He was born in Guangzhou, China and grew up in Canada. He has typical Cantonese tastes on food stuff, but it's an exception (and a pity!) that he isn't interested in tea. He drinks tea sometimes... I mean, mostly in restaurants... He is generally uninterested in tea. Sometimes I give him some tea to taste, without worrying that he would grab a lot from me ;-) He would rarely like a low-end tea. But among the high end teas, he only enjoys some of them, which are not necessarily my favorite ones.

Among all the Chinese restaurants Baiding has been to, most of them are Cantonese restaurants, which typically serve cheap shu. So Baiding knows about puerh and has drunk a lot of puerh. He generally know of shu and sheng, but doesn't care enough to know much of them. He doesn't know much about impact of aging or storage on puerh, or the difference between storage styles. He isn't aware of what's dry storage and what's humid storage. Purely innocent :-D

So we were drinking these two teas (mostly drunk by me and he tasted just a little).

The dry tea leaves don't look that much different and it's not easy to tell which is which, as showed in part 1. 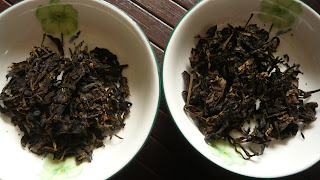 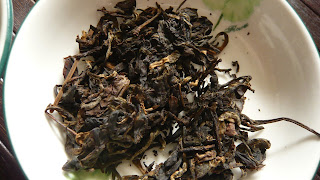 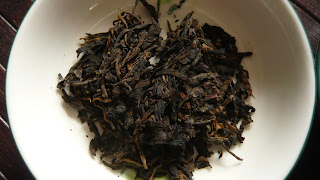 Once brewed, there is no need to guess which is which. 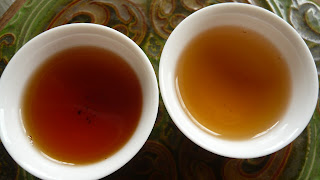 The differences are huge in color, aroma and taste. 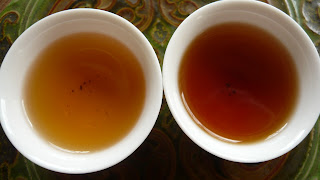 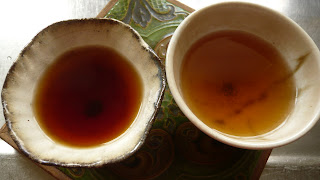 The brewing was very casual. Most of the time when I drink and compare two very different teas, I would grab whatever convenient to use and don't bother using uniform tea wares, because the difference of the tea would be much, much bigger than any difference that could be caused by tea ware or slight differences in leaf/water ratio. 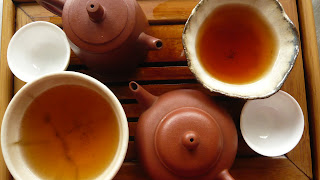 So we had the little cups to compare colors (without them the color contrast would be strong anyway) and the larger cups for drinking (I like using teacups of the same sizes as the teapots so that sharing pitcher is omitted).

The spent leaves look very different too. But if there weren't the comparison from the dry-storage, I feel it would be a little hard to judge if the leaves in this cup from dry storage or humid storage, because this humid storage wasn't very heavy. If one is told the age of the tea as well, then probably it's much easier to tell it went through humid storage based on the liquor color. But without tasting or smelling, or being told the age of the tea, it could be hard to tell. When the spent leaves are put side by side and if knowing these are "twins", then everybody could tell which is which. 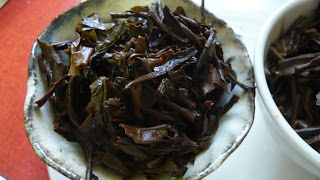 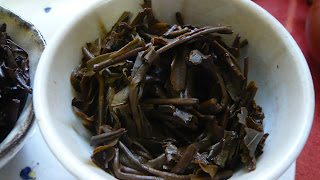 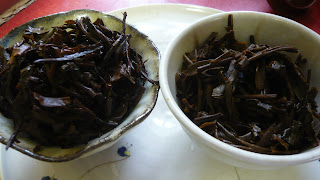 Baiding's comments on the humid storage tea - "tastes better than how it smells", "tastes a little bit like straw", "a little bitter, but mainly sweet." His comments on the dry-stored tea - "more bitter and more sour than the other one, but after a while the taste turns better." To answer the question "if you pick one to drink between the two, which one do you pick?" His answer - the dry-stored one. This last answer did surprised me a bit. I suspect many of his fellow Cantonese would pick the humid storage one. But probably it's because this guy has spent too many years in the dry and cold Ontario?!

My comments on the humid storage tea - the liquor texture is very nice; it's one of the most acceptable humid storage tea for my personal taste, yet I wish the tea has everything else but not the storage taste (straw flavor Baiding mentioned, I believe); overall the storage of this tea is the very light type of humid storage, so I'm hopeful that at least some of the "straw" taste would go away with time being. My comments on the dry-stored tea - the aftertaste is great; it could get bitter and astringent though; I feel the characteristics of the humid storage version somehow reflect some quality of this tea and make me believe the dry-stored version has a great future. It will take time to find out what the future is like, and I'm sure this tea will be with me in the next decade or so.
at 1:00 AM