{Off the topic for a second... here is something nice that I saw from a Russian tea forum! (with translation tool, of course...) -
We look for the taste, not the "absolute truth." A taste, as you know, everyone has their own. Those who love Puerh, understand what "diversity" means.

I like it and think it's true for a lot of teas and a lot of things...

And, oh my! There seem to be lots of puerh enthusiasts over there in Russia! Maybe it has to do wit culture, climate as well as diet?}

This is something I liked a lot. I think it tastes quite similar to another Yiwu loose tea that's also labeled 1989, from a different dealer. I wonder if they share the same source. But I was too occupied by other things to compare the two. And so far, both of them are buried somewhere in one of the numerous unopened moving boxes which resulted from my moving 3 months ago... So you know, I'm still recovering from my moving event, and really miss the rural New England (I'm now in urban New England...)

The leaves are clean! I don't have enough experience to tell harvest season of every puerh. But from the leaf shape and the taste characteristics, I'm guessing it's an autumn harvest. The price is also consistent with autumn harvest, which often has lower price than spring harvest for aged tea. 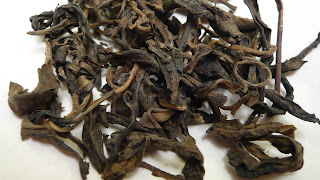 The liquor is smooth and has a nice rice-soup kind of stickiness. That's one of my favorite characteristics from all kinds of tea. Green tea, oolong, puerh... they are so different, yet the best of each type often gives you this "rice-soup" mouth-feel.

The aftertaste has a floral and honey flavor, exactly what I would like to see in a dry-stored sheng.

The taste is rich and deep enough, but not the most powerful that I've seen from aged sheng. I guess it's because this is an autumn harvest. In both puerh field and Tie Guan Yin field, I've heard people say this again and again, "Drink spring harvest for its liquor texture, and drink autumn harvest for its aroma." (春水，秋香。） My understanding is, this is largely why autumn harvest aged puerh is often less expensive. In aged puerh, the liquor texture and the long-lasting aftertaste is valued a lot more than the aroma immediately rising up at the first sip. Autumn harvest tea usually doesn't have as rich texture as spring harvest, which accumulated nutrients throughout a whole winter. But on the other hand, I have an impression that good autumn harvest tea loses bitterness faster in aging - that's the other side of the coin!

I usually drink this tea for 8-10 infusions. That's not a lot of infusions for a puerh. So that may count as a limitation of this tea. But overall, I'm happy enough with several nice infusions. 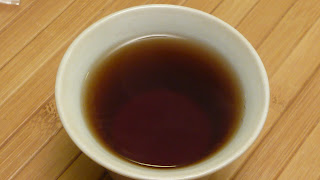 And, I always have this obsession at the outlook of leaves! The leaves of this tea are not of particularly high grade. But it looks so leathery, succulent, and lively! The outlook of leaves is also something that often amazes me across tea categories. Some aged puerh, aged oolong, and roasted oolong, after going through all the years and/or all the fire, the spent leaves look surprisingly young and alive. 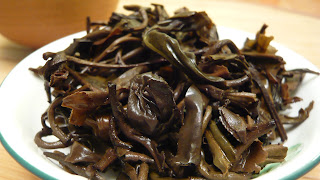 Now I don't know why I'm here writing a blog. I have deadlines to meet in few days and feel quite guilty for spending time on blog instead... But somehow blogging may serve as my ventilation and "mental massage" - that's my excuse :-)
at 12:36 PM

Yes, and just like a person who walks by a house on their way home from work and hears someone playing their piano inside a house, or singing (I love experiencing this, just happened to me the other day)_, unbeknownst to the musician or the blogger, there are many others who get unexpected/unpredictable side benefit from one person's ventilation/individual pursuits! That's a kind of karma too :)

Thanks Nick, for your nice comments! I feel the same way! Sometimes the beauty of good karma is that we can't predict it and it comes unexpected.