(Recently I have been very much occupied by other work and didn't have much time doing "useless" things such as blogging... But it feels good to finally find some time and write about tea again, haha ~ )

I've had a few Korean export puerh and enjoyed everyone of them. (Here is another Korean export puerh that I like very much.) So when I saw this one, I thought I would take home some no matter what. Besides my optimistic expectation on the tea itself, I'm always drawn by the packaging of the tea. The Korean export puerh packagings I've seen, including the simple, plain ones, are all very neat.

This tea is said to be custom order by some national TV station of Korea. The bamboo tong is very elegant. I thought usually this type of corporation orders are to be gifted cake by cake, and the recipients won't get whole tongs. But this one makes me feel guilty to break the bamboo shell package. So maybe this is a very generous TV station and they were going to give each guest a whole tong of this tea. Oh them lucky guests!

In my impression, Korean export tea typically has these characteristics:
1. Nice packaging.
2. Ancient tree or at least big arbor tree.
3. Nice leaf shape. Good looking compressed tea.
4. Very clean. Some people in puerh industry told me that Korean puerh import inspection is very strict. The tea must be very clean (free of straws, stones, hairs or any other commonly seen gwp of puerh...) to pass the inspection.
5. The taste and aroma is more of the elegant style rather than the powerful style. I don't know if the tea would feel not powerful enough to people with heavier taste. But to me, it's just great. I don't believe a tea has to give you a harsh kick to be great.

Overall this tea has all above characteristics. 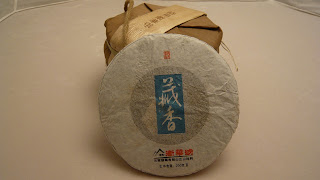 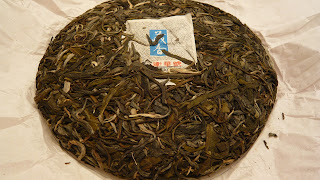 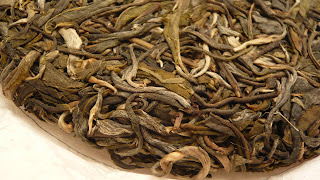 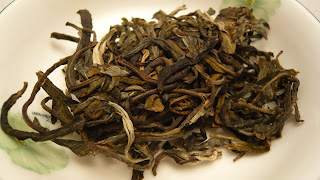 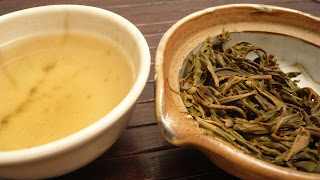 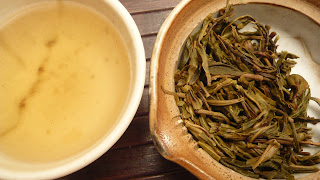 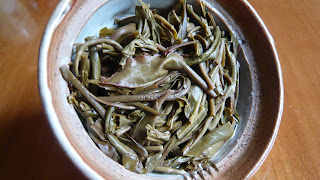 Besides the above mentioned characteristics, what's interesting about this tea is, it's a spring tea that was compressed in autumn. Quite a few puerh producers I've talked with believe it's good to wait for a few to several months and let the tea "sweat out" before compressing new sheng, much better than compressing the tea shortly after harvest. It's what people did in the traditional society too. But most of those who said so still compress their tea in spring, because, that's when the tea sells and a tea compressed in autumn would cause numerous questions about whether the tea is "really harvested in spring". In modern society, many people believe in quick cash, and they just wouldn't believe you would hold a spring tea till autumn while you could sell it fast in spring. In recent years, there are more and more producers who venture to compress some of their spring tea later in the year. Usually these are producers who have established reputation and a stable group of returning buyers. For new producers, I guess autumn compressing is not quite practical with the current market mentality, and with the commonly seen cash flow problem in modern puerh industry. I don't know how the patron of this tea decided they would like the tea compressed in autumn instead of spring. But I guess that's a good decision.

Comparing a few 2011 spring-compressed sheng and a few 2011 autumn-compressed sheng I had (both types are made of spring tea), I have a general impression that the "grassy taste" of new tea faded much faster in the autumn compressed tea. I generally wouldn't drink a lot of new sheng and usually would like to wait till the grassy taste fades from a new tea before drinking more of it. In this sense, I feel autumn-compressed tea has some short-term benefit too. A caveat (if I may call it a caveat) is that I also have the impression that autumn compressed tea tend to lose the uprising aroma of new tea sooner. I'm not sure this is really a drawback though, because for puerh, people generally expect for long-term outcome, and the new tea uprising aroma would evaporate sooner or later within few years, even for the spring-compressed tea.

I haven't tasted a lot of this tea yet as it's still too young for me. But overall my impression is, it's didn't blow me away in either good way or bad way (I mean it's not overwhelming or too harsh either), but it's very pleasant as a new tea and has a depth of flavor that may indicate good future development.

The production date on the wrapper is October 2011. The seller of this tea was a little regretful about it and told everybody 100 times that "it is a spring harvest, spring harvest, spring... spring..." It's the national regulation that the production date of a puerh must be the date of compression - which is actually reasonable, but then there is not enough "hard proof" about the tea being a spring harvest, which worries producers and sellers a lot. It's not hard to tell a spring harvest from a non-spring harvest, and "hard proof" of a printed date on the wrapper is theoretically not necessary at all. But that's exactly what the market is after, especially in China. Unfortunately a lot of people buy tea entirely based on "selling points" (spring harvest, arbor tree, xxx village product...) and a lot of sellers sell tea completely based on these selling points (or they would create some selling points). But then, is it really that unfortunate? Maybe not... Good deals belong to people who don't follow the selling points and discover tea that are under-priced due to lacking hard proof of "the selling points" :-p
at 11:57 PM

The packaging looks like a French cheese... Yum! ;-)
Thanks for this interesting post, Cheers
Marion from www.bienfaitsthevert.com