In Buddhism, kharma means "cause" or "effect" or "chain of cause and effect" or pre-destined relationship... It's hard to summarize the exact meaning of it, I guess. Generally speaking, it's very hard to trace the cause of a thing or to track the outcome of a thing. But it's generally believed by Buddhists that good causes would lead to good outcomes, sooner or later. So doing good deeds or create good kharma is sort of like putting away money in your saving account, I guess ;-)

Sometimes "kharma" can serve as a simple explanation of things that are beyond our understanding. For example, why isn't life fair? Why is her boss a jerk? Why this accident just happened to me? Why did he win the lottery? You can't always find a logical answer to every question. But "it's all kharma!"

To me, tea kharma is about how we sometimes want a tea without getting it, and how sometimes a tea come to our way unexpectedly. All of these have their causes but we can't always know or predict. For example, last year I got some really nice Tai Ping Hou Kui but this year I didn't get any. There are many reasons: prices, timing, my own reasons... But all in all, I guess it's just "tea kharma". Maybe I will get some next year. If not (nowadays it's much harder to get good Tai Ping Hou Kui than Long Jing), then probably the year after next year...

It's also "tea kharma" that this year I got a few teas that I didn't even expect. Such as this green tea casually labeled as "high mountain orchid aroma", from one of my favorite green tea supplier. If I get Yong Xi Huo Qing in a year, usually it's from her. Besides business interaction and regular chatting, we didn't talk very much. But from her small tea gifts like this one, I think she likes me a lot :-D She gave me two small packs of green teas last year and two small packs this year. None of them was ever in her tea sale list and I guess it's because the amount is too small to be listed for sale.

The monkey well illustrates my reactions to this tea :-) 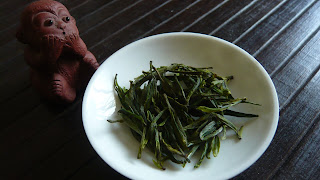 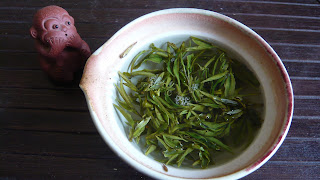 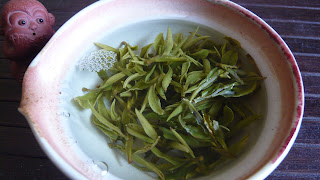 The name of the tea doesn't tell much. It's a green tea from Anhui. A lot of green teas from Anhui are from "high mountain" regions and have sort of "orchid aroma". So this one is almost like nameless. However, it's one of the best Anhui green teas that I've had. I guess this is partially because it's really outstanding, and partially because it's not something that I can get whenever I want. It came to me unexpectedly and I don't know if I will encounter it again in future. So the name is not important, and I will just enjoy it while it lasts!
at 10:16 PM