Part (1) is here. Take the guess before you read on, and make sure to answer the "bonus question" at the end of this :-)

Zheng Xi means "authentic Anxi". That's the traditional advertising title traditionally used in Fujian and Guangdong for some southern Fujian tea, which may or may not be tea from Anxi.

Have you seen this tea in your local Chinatown stores? I've never seen it in North America. But it's an export product. I wonder if it's in large amount in America, or mainly exported to southeastern Asia. 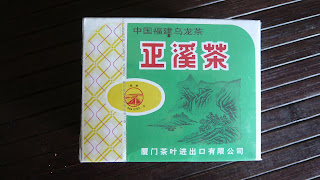 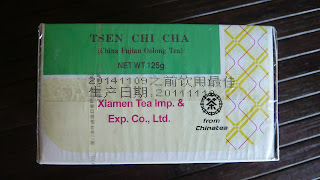 This label says, Se Zhong (without specifying cultivars and maybe it's a blend of various Sezhong cultivars), Grade 2. 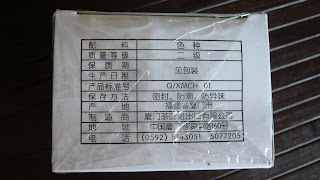 This tea is probably one of the two cheapest teas I've ever had :-D Another one with comparable price was a cheap phoenix Shui Xian that I once logged on steepster. The phoenix Shui Xian is even cheaper, but consider this one comes with proper packaging (sealed foil bag in a paper box which is sealed with plastic film), the tea part of its price is probably even lower than that one.

Another surprisingly cheap tea I got a few years ago is this Da Hong Pao by the same company and of the same brand. It was that Da Hong Pao that made me start paying attention to this brand - Sea Dyke. Obviously, I'm too young to know it well :-p It turned out that this is one of the most popular brands among Chinese oolong lovers of 50 (?) years old or older :-)  It has been a very popular brand in Southeastern Asia as well.

To me, this tea is not as tasty as the above-mentioned red-box Da Hong Pao, which is not as tasty as many other oolongs. But I think both of them taste better than some other teas many times of their prices. And this Zheng Xi Cha sets a new price record for me on "cheap and drinkable" tea. These types of teas help me understand why some of those old guys from Fujian and Guangdong are so savvy at tea shopping. If you grow up drinking cheap and passable teas, you are less likely to buy in some expensive but merely passable teas - that's my interpretation :-)

Those of you who mentioned aged oolong in your guesses, nice hit! I was told it's a 2011 product upon purchase. So it never came to my mind there could be some connection to aged oolong. But just these a couple of days I've been reading about this brand (Sea Dyke). And it's said (by a mid-aged tea business man who started his career by black market trade of exactly this tea...) that this tea is blended with tea products of various years to maintain its consistent style. I thought it was entirely "puerh behavior", didn't know they had been doing this kind of big-factory blending to oolong too, and find it quite interesting!

So I actually paid more for its shipping than the tea itself. I wonder if it's sold in the States. A similar product (probably the same tea of same grade) is of the same package style but in 500g volume metal tin.

I bought this tea because I heard a lot about it, and because I was buying some aged oolong released by Sea Dyke (which I also think is a very interesting phenomenon and I would like to discuss later). All these days I was wondering why Sea Dyke has kept so much aged oolong. There was almost no commercial market of it in mainland China for the past decades, or anytime before this current time. And even now, aged non-puerh is not popular at all in mainland China (with a potential growth in aged oolong and aged white tea). I just couldn't believe Sea Dyke could predict 15 years ago that aged oolong would be "hot" someday and saved aside tea then :-p But after reading about their blending secret, now I guess probably that's why they have aged oolong in stock to begin with.

I said earlier that if this tea is imported to America, probably it's price would be 150%-200% of its Chinese price, which would be $2-2.5 per 125g. But that's just a guess and still need to be verified. I took this guess mainly because many of Sea Dyke products are cheaper overseas than in China (that's also an interesting and rare phenomenon). But since this tea is already cheap, maybe it's hard to make it even cheaper. I guess importers of this tea would mainly be Chinatown store types of businesses and I guess they are not the type that would have big price mark-up. That's how I guess the US price of this tea could be 1.5-2 times of its Chinese price.

Now, a bonus question :-) The above-mentioned cheap red-box Da Hong Pao, its Canadian price is (or was, in 2009) $5.49 (200g box). And as mentioned in that blog post, its Chinese price is more than that. Without doing a real search on its Chinese price, what would you guess its Chinese price is? Just take a guess. Prices don't always make sense. So, guess, don't think :-)
at 1:17 PM

Ah, that brings back fond memories for me! Maybe 8 years ago, feeling lucky I suppose, I bought a box of that roasty tea in New York's Chinatown for $1.25. Not to exaggerate, it was quite decent, more enjoyable than many teas far more expensive. As I remember, it wouldn't maintain interest after, say, 3 steeps, though. Haven't seen it in quite a while.

Now I feel you are one generation ahead of me :-p

$1.25 was very good, even for several years ago! In China, the price of this tea increased only by 10 folds in the past 30 years. This makes it possibly the most price-stable commodity in China :-p