In my eyes, a "Concept Tea" is a tea made to showcase some concepts. It is often rare in the market, and by making it, the manufacturer has a broader goal than market profit. May it be the redemption of a fading tradition, experimental techniques, or even outcome of an accident, the tea expresses some ideas from the Shi Fu (師傅, an experienced, highly skillful tea worker). The tea may prevail the market in the future, or it may remain within appreciation of small groups of tea drinkers. No matter what its fate is in market, I believe, the tea should be valued for the concepts behind it. Tea is a wonderful beverage. It is one of the few food and beverage products whose markets are not dominated by major varieties, major brands, major companies or major manufactures, not in the past thousands of years, and I believe, not in the future either. This is because of the diversity in tea, the many thousand tea varieties, and dozens of ways to make a tea with each cultivar.
I will start a blog series exploring some Concept Teas, as well as include some of them in our store collection.
Here is the first one, a traditional style, charcoal roasted semi-Tie Guan Yin
Dry tea leaves: 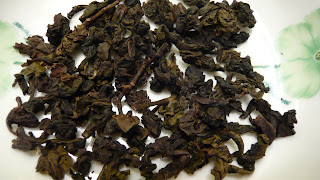 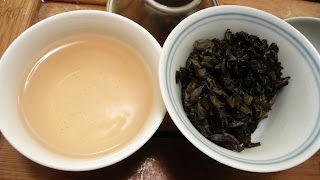 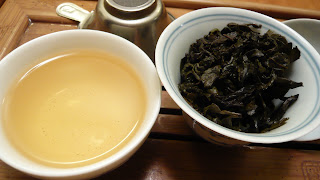 I would like to try the mug-brewing version of this tea. But this time, I use my favorite little tea bowl instead. 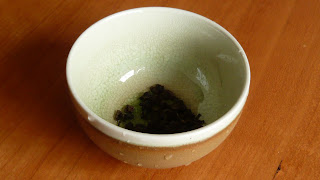 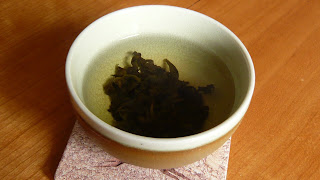 It's one of the best charcoal roasted teas I had in 2009. The flavor is powerful, with ripe fruit aroma and strong sweet aftertaste. It lasts for many infusions. Besides, it's entirely tolerant of long infusions, and yield consistent flavor in multiple infusions of mug/bowl brewing. If I were not told so, without examining the spent leaves, I probably wouldn't be able to tell the leaves are not all Tie Guan Yin.
What's special about this Tie Guan Yin? It's special mainly in two ways:

1. It's made with both Tie Guan Yin leaves and Mao Xie (Hairy Crab) leaves to promote a great flavor profile
2. It's charcoal roasted by skillful workers with 40 years of experience.
It took me some time to decide what to call this tea. I am very reluctant to call it blended Tie Guan Yin, even though it's made with Tie Guan Yin and Mao Xie blended. The reason is that in current Tie Guan Yin world, a "blended tea" is almost always a negative title. The modern blended tea has betrayed the tradition of Pin Pei (拼配, Mix and Match) since long time ago. In modern days, some people mix Mao Xie and other Se Zhong oolong (which are all generally significantly cheaper than Tie Guan Yin) into Tie Guan Yin to maximize profits. In this behavior, Se Zhong cultivars are deemed as "inferior" or "cheap" cultivars, and the manufacturer wouldn't let consumers know about the blending.
In the real tradition of Tie Guan Yin Mix and Match, the purpose of blending is to achieve the best combination of tea flavor, so different teas are not just "mixed", but their flavors should "match" each other. Besides, although one can always use the best Tie Guan Yin leaves to make the most expensive tea, sometimes, mixing high quality Tie Guan Yin and high quality Mao Xie (which is a lot cheaper) can generate great flavor at much lower costs.
This tea is the only one I know of that was made with such traditional Mix and Match method. To me, it's important to include it in our collection, because it's a Concept Tea - I call it so because it's not commonly seen, and I hope there is more of this kind in the future. I think, the concepts behind this tea are:
1. There are many ways to make a great tea. An outstanding tea product comes from top quality leaves, top tea workers and perfect processing. A manufacturer doesn't have to stick only to the most expensive and trendy varieties.
2. A great tea doesn't have to be expensive. The charcoal roast taste of this tea is one of the best, but it's not an expensive tea. In my opinion, the charcoal roast work on this tea is even better than that of our popular Tie Guan Yin Traditional Charcoal Roast (which is reviewed at Steepster and Teaviews). But due to lower costs of Mao Xie leaves of even top quality, the manufacturer has given us very friendly price of this tea. Therefore this tea is even less expensive than our current popular Tie Guan Yin Traditional Charcoal Roast.

I’ve set aside some samples of this tea for fellow bloggers. Please see recent events for blogger free sample information (you will need to scroll down to the bottom of the linked page).
at 4:00 PM

I think you're right that word "blend" is so loaded. Blends are not necessarily lower in quality...it's just that mass production of low-quality tea has given blending a bad name.

I also have found that the Se Zhong oolongs offer some of the best value out there...trying them, I have rarely been disappointed, and often, very pleasantly surprised, especially when I consider their low price.

I've been collecting information on the RateTea.net page on Se Chung / Se Zhong and I'd be grateful if you'd check it out and let me know if you have any corrections or additional information to offer. I have been finding it hard to locate information on these oolongs.

Hi Alex, your se zhong page looks very good! The only thing I can add is Fo Shou (佛手 or buddha hand, or bergamot oolong - it's not scented but buddha hand is what bergamot is called in China). I've occasionally seen a few other se zhong, but haven't really got any. About teas sold with se zhong as product name, I wonder if each of them is actually one varietal, but the product name is somewhat lost in translation. These se zhong varieties are quite different and their price ranges are somewhat different too, so probably they will not be mixed into one product.

And yes as you said, good se zhong is usually a better deal than Tie Guan Yin.