This brick is said to have some relation with the Xia Guan mushroom sheng, which is often called Bao Yan (treasure flame) Jin Cha (tightly pressed tea). But in fact, leaves in this tea are more choppy than those found in the mushroom tea. The mushroom is said, by many tea drinkers, and not denied by Xia Guan Factory, to be royal tribute for Ban Chan Lama. But I guess the royal tribute version is a special, limited edition, not the same as seen in the market. I guess the source of all this said-to-be relations is, between 1967 and 1986, the previously popular mushroom tea was made into brick shape, for the convenience of packaging and transport. But in 1986, Ban Chan Lama sent his message to Xia Guan Factory that he believed many Tibetans still preferred the mushroom shape. From then on, mushroom tea started to be produced again. But mean time, the brick tea is also produced, and has Bao Yan as its product name. However, many people would call it Bian Xiao (meaning "made for border regions") Brick.

I've had this tea for a few years. Recently, for the first time, I gathered my courage to drink it. I think this tea is interesting in a few ways.

First, it's a great demonstration of Xia Guan Factory's traditional Sa Mian technique (meaning using higher grade leaves to cover the surface of a puerh product). Why this coverage technique was traditionally used on puerh product? That's an interesting and complicated question to think about. But now we can skip the question and take a look at its surface, evenly covered by larger leaves. 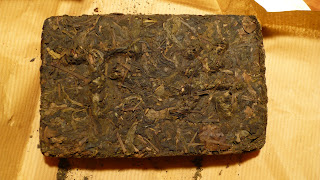 I said I had to gather some courage to drink this tea, first of all because it's a Xia Guan and it must have the harshness of Xia Guan. Secondly because this tea is one of the most choppy teas of Xia Guan. It's made of chopped leaves and leave debris gathered from production of other Xia Guan teas (well I am sure they will save even the chopped leaves of higher end teas and won't use them in this brick).

About this tea, I've heard drastically different comments from people. Some say it's a treasure after aging 10 or 20 years (which I don't have a chance to experience yet). Some say it's a terrible lower end tea, not much more than floor dust (comparable to teabags?).

So, to prepare for the worse, I pried off pieces from the bottom side of this brick, where there is no coverage of larger leaves. Now looking at the pieces, can anyone recognize any leaf piece larger than a rice grain? I couldn't :-p 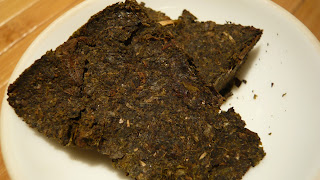 But I'm not scared. Part of my courage was from this cute little teapot from Yuuki Cha. It's a great teapot in many ways! 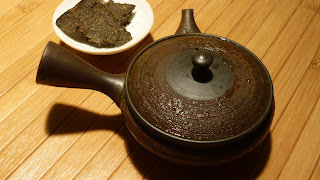 And it's especially great for this tea, because, under its outlook of traditional beauty, it has the nice, modern, obiami 360 degree filter! 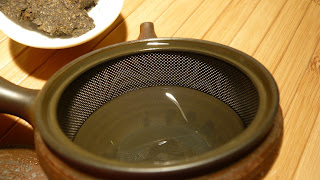 The tea liquor has some dusts and "pulp", which precipitate to the bottom of the cup. All the debris were effectively filtrated out by the teapot strainer! More importantly, the pouring time of this teapot is about 5-6 seconds! That's the difference between a pleasant cup of Xia Guan and a bitter+astringent cup of Xia Guan. When brewing this tea, pouring time of a yixing teapot could be... forever... when the straining holes are clogged by the chopped leaves. Using a gaiwan might be better, but the leaf debris are very small and can easily come out of the gaiwan. Then you will need to use an additional strainer anyway, and the leaf debris may soon lay a layer of debris blanket on the strainer. 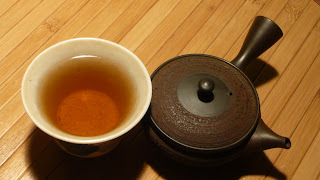 A look into the teapot. Can you recognize any leaf piece larger than a green bean? I couldn't :-p 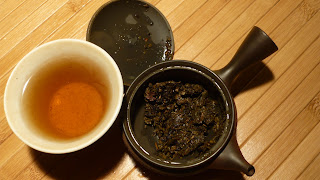 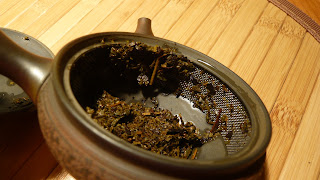 Something else that I think interesting about this tea is, just as people said, its chopped leaves aged rapidly! Liquor of this tea is redder than that of my 2004 Xia Guan Jia Ji Tuo, and taste is milder and smoother, with a hint of the Xia Guan feature smoky aroma.

With such choppy leaves, it's amazing how many infusions this tea can last. Here is a snapshot after about 7-8 infusions. The taste was strong, but the compressed piece wasn't entirely dissembled yet. I gave it several more infusions, but knew it could go even much farther. 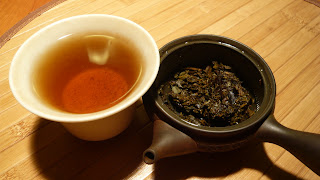 My impression from examining the used leaves is, although most leaves are in debris, not all of them are very dry and old leaves (especially if compared with Fu Zhuan 茯砖, which I've tealogged on steepster). Some are, and some are just normal leaves in smaller pieces. Overall the brick is a mixture of leaves of various grades. If brewed longer, the tea yield some, but not much, tobacco type of astringency (I don't know if I said so, although I've never eaten tobacco leaves), which might be from some older leaves.
at 11:04 AM

May be a dumb question to more experienced pu erh drinkers, but how strongly compressed is that cake?
Because I have a tuo that is also of fairly choppy pieces (maybe not as small, but small), and it's extremely hard compressed. It's from 96 or something, and for that vintage I probably would expect more aged features than it actually has.
But maybe you can't make that small stuff stick together any other way than compressing it extremely tight - ?

Martin, this brick is very easy to pry with a prying needle. I think it's because the leaves are too choppy and they don't intertwine with each other. Is your tuo a Xia Guan tuo? Xia Guan tuos are generally very hard to dissemble. But it improves with years. My 2004 Xia Guan tuo is already easier to deal with than new ones, but still quite tight.

Thanks for your feedback, Ginko.
The tuo I mentioned is a classic from Feng Qing.
I found your point interesting that very small leave pieces, although generally not so desireable, will allow for faster aging. My guess was that the compression should not be too tight for this effect to work. Well, your answer and my experience with the Feng Qing seem to confirm that.

I read your pu erh reviews with great interest, for one thing because I'm one with a sensitive stomach, too.