(By the way, the 6th blog carnival of ATB will be about What is the most uncomfortable place where you prepared tea (work, traveling, in a place without suitable equipment, etc.) and how were you able to overcome the difficulty? I don't have much to say about this, so will be in the audience. It will be published tomorrow and hosted by Gongfu Girl.)

Generally I don't feel comfortable to drink brand new sheng. I tried this tea last year, and found it quite drinkable even when brand new (with some of its leaves from 2009 and 3 months of "buffering period" after the tuo was made). But just to mentally obey my restriction on drinking new sheng, I waited patiently till recently to drink it again - not that January 2011 is that much different from December 2010.

I think this tea is very unique, and almost wanted to put it in the archive of Concept Tea. But then, in puerh, there are too many concepts, and too many concepts upon which people never agree with each other. So, no trouble making, just drinking the tea :-p

(I will soon write about a Concept Tea puerh, which, I believe, most people would find somewhat unique.)

The tea is made of early spring 2010 high mountain young arbor tea leaves and 2009 old tree wild tea blended - this sounds to me a very exotic way of blending. The manufacture's goal of this tuo is to make a product not harsh on stomach when drunk new. It's beyond me how a new tea with wild tea leaves can be not harsh on stomach (maybe due to the 1 year of aging in loose tea state). But after trying it last year, as one with relatively weak stomach, I found it quite friendly.

Something else that I've found interesting about this product is, Da Dian, its manufacturer, predicts that this product reaches its peak after about 5 years (aged in intermediate humidity). Again it's beyond me how to make such a prediction. But I am kind of glad that he didn't tell me the tea would peak after 20 years. I think I am glad because it will take only several years to test this hypothesis. 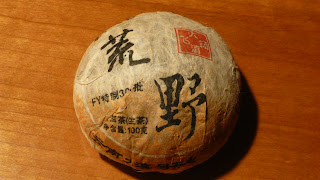 There are two types of leaves in the tuo. The bigger and broader leaves are not Huang Pian (yellow flake, or older leaves), but leaves from wild old tree. 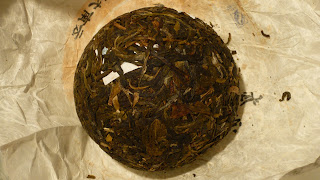 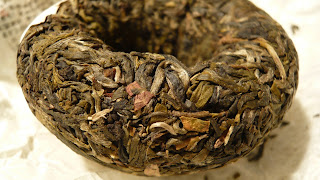 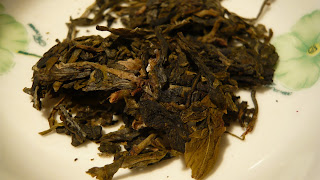 What I like the most about this tea is its dark honey flavor and strong aftertaste. The liquor color looks "warmer" than most new sheng too. 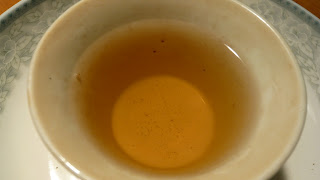 Two types of leaves can be found among the spent leaves. The top left, bottom left and bottom right are typical early spring stems, buds and leaves. The leaves on the left and on the right are wild tea leaves with deeper color and rougher texture. 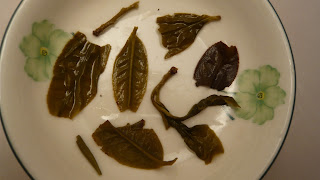 I like it how you always say you don't like to drink new sheng, but you often do :). Or at least, that's what I noticed from your posts.

Btw, I find your blog one of the most informative around, it helps me a lot . Thanks.

Cosmin, thank you for your comments :D

I try to hold myself back from drinking too much new sheng. Having a lot of samples around can be dangerous :-p