Other reunions of puerh twins or triplets can be found here.

This pair of twins are different in terms of two factors, one factor is storage location and the other factor is the shape of tea. Brother #1 is a brick and brother #2 is a cake. One of them was stored in Kunming between 2003 and 2013 and one of them was stored in Guangzhou throughout the time (both dry-stored, and the supplier of the teas literally repeated for more than a dozen times that the Guangzhou-stored one is dry-stored, dry-stored, dry-stored...) Their difference in taste, I believe, is mostly due to their storage environment. But it's unknown to me how much the shape of the teas has affected their aging.

Traditionally bricks were often made with lower grade leaf materials than cakes (and against today's trend, tuo used to use the highest grade of leaf materials). Up till today, many puerh brands still have both cakes and bricks in the same product series, and higher leaf materials are used for the cake. But these two teas are made of exactly the same leaf materials from the same batch. So they are indeed twins. And I think it's cute that they even have same clothing.

Both teas have decent leaf materials, but not as pretty leaves and buds as today's most expensive puerh products. Like many other good teas made in early 2000s and before, the tea doesn't look as meticulously made as many modern-day products. But it's easy to tell the leaves are nice and nutritious. 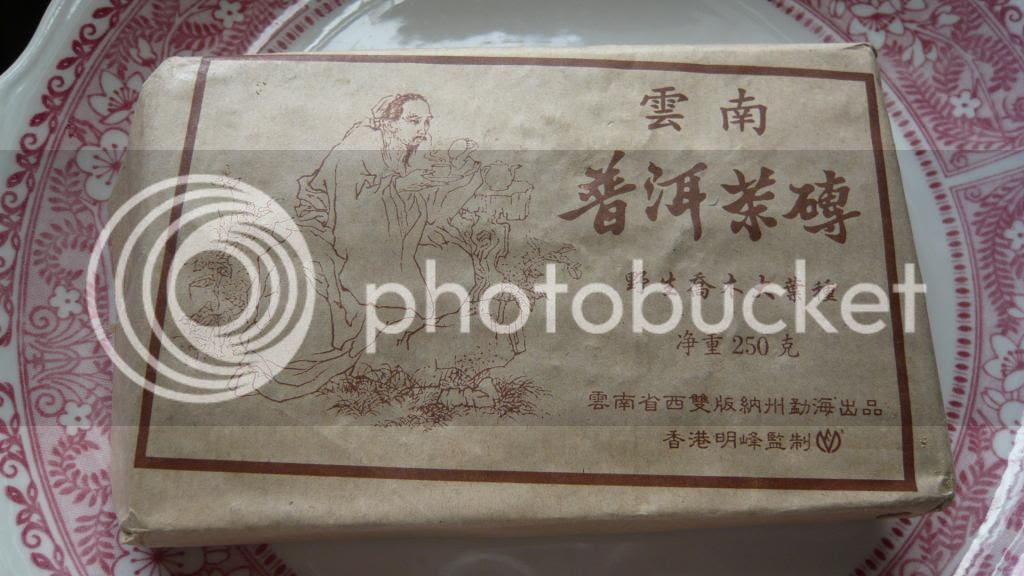 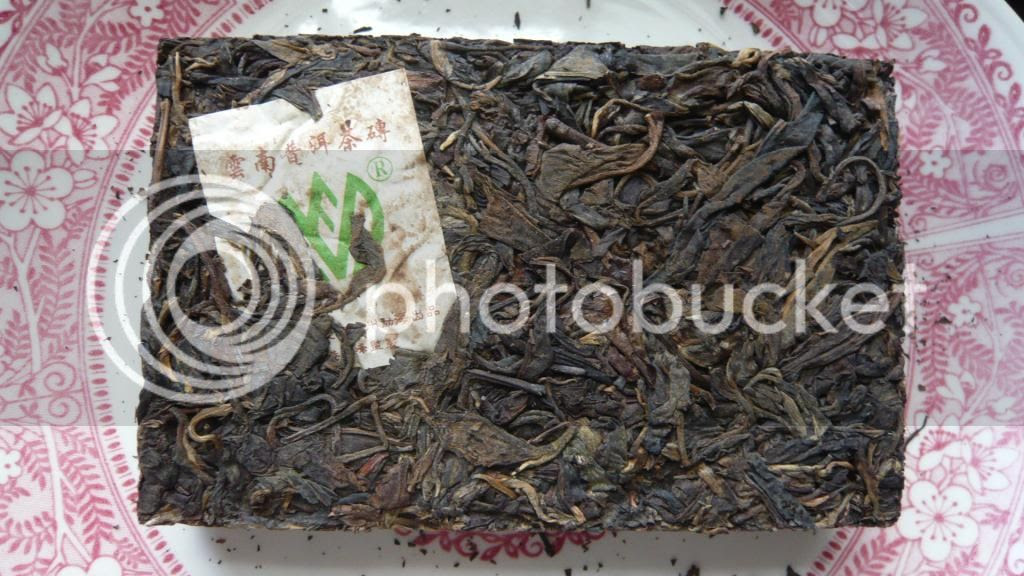 This one has a "gift with purchase" - a cotton string 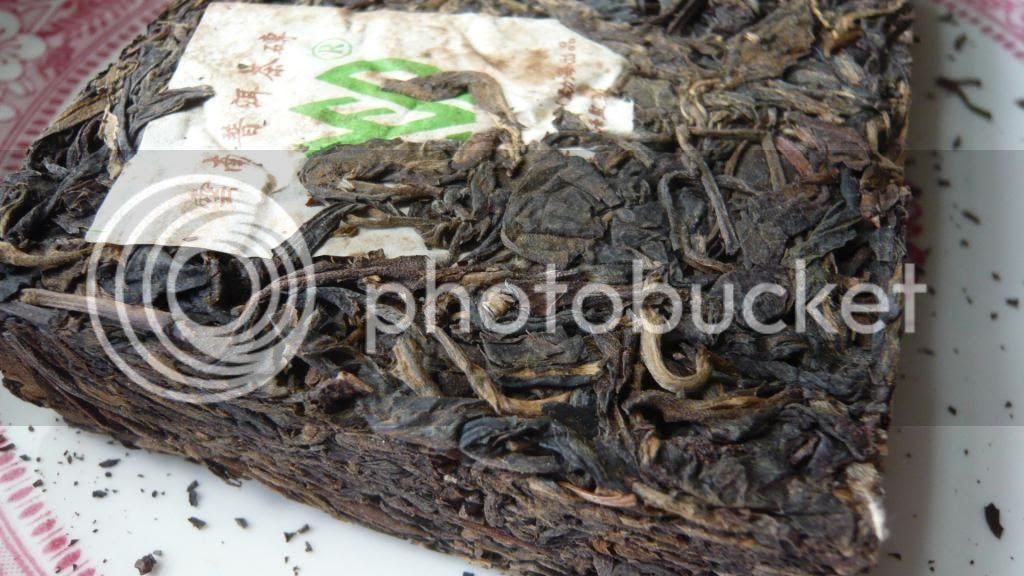 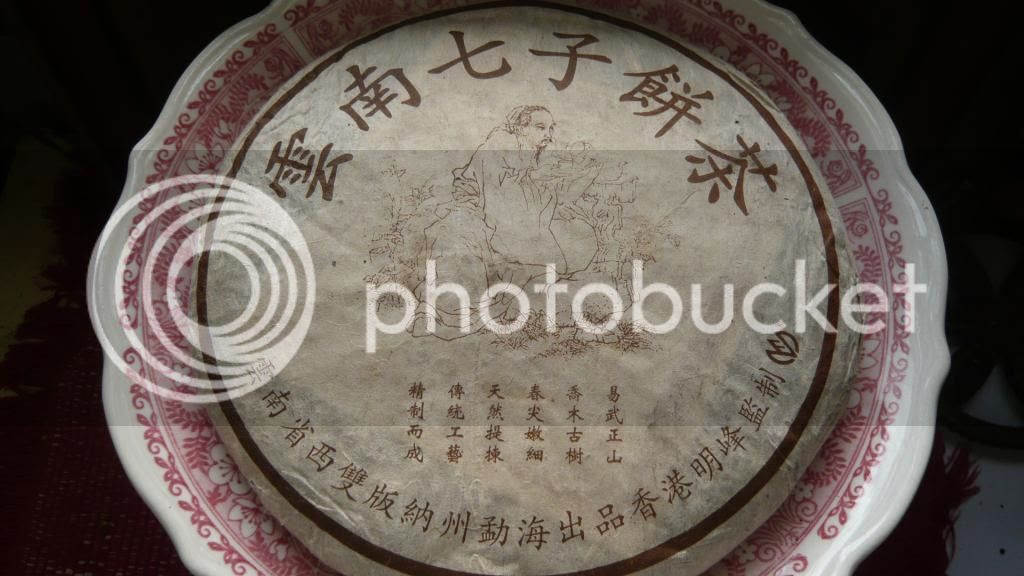 This one also has a "gift with purchase" - a wheat shell 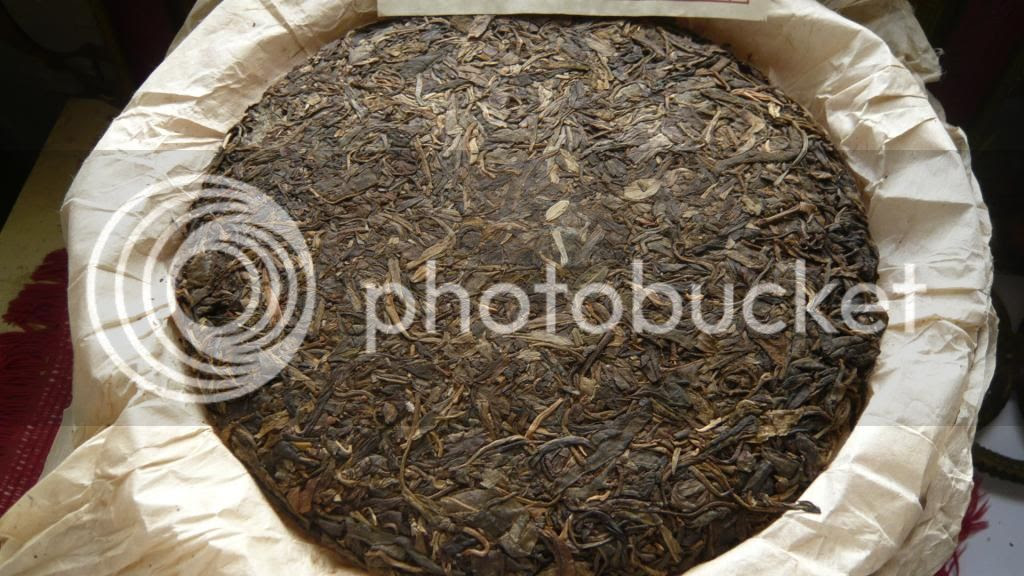 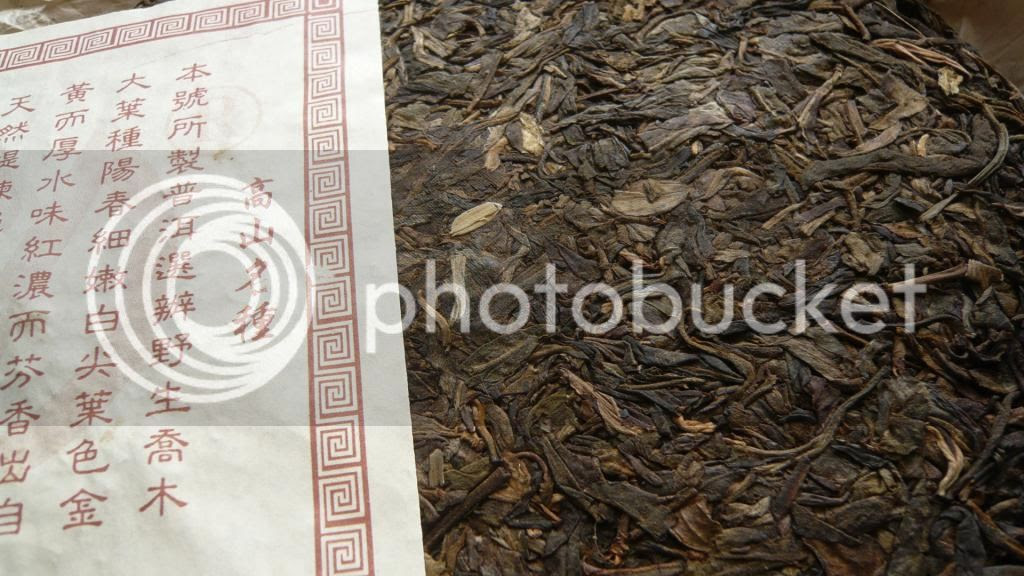 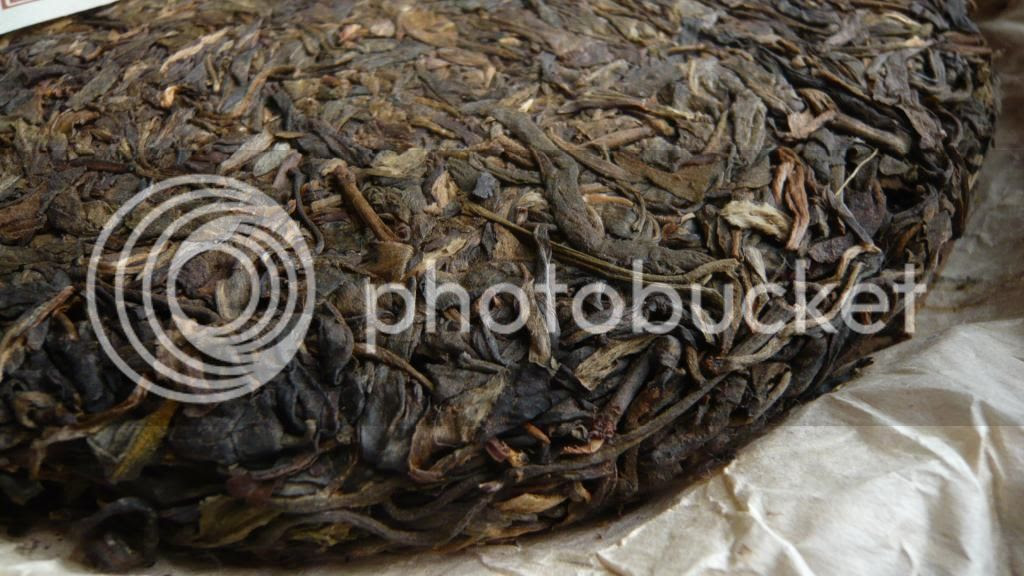 One small piece off each: 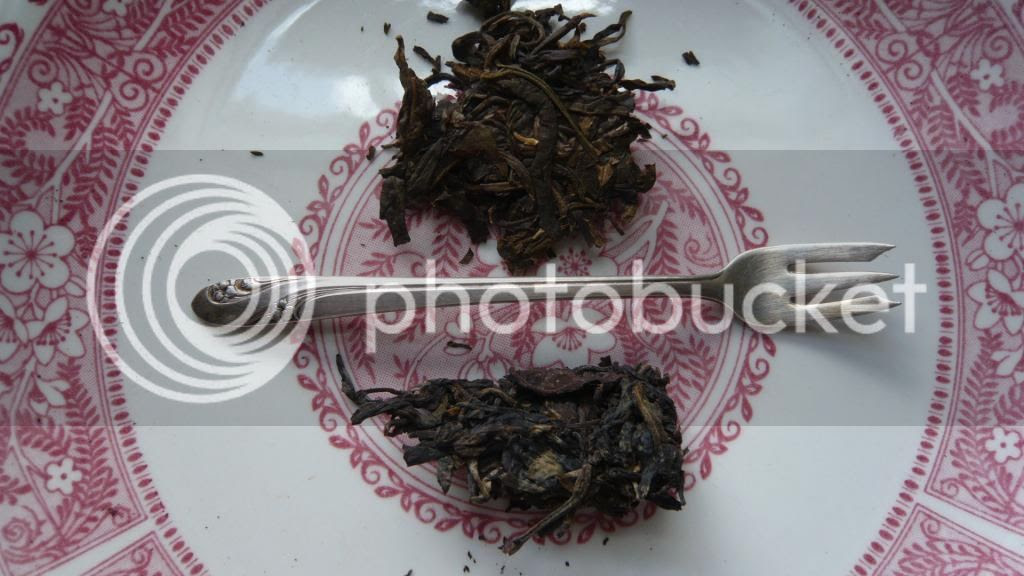 Close up look of the piece from the cake: 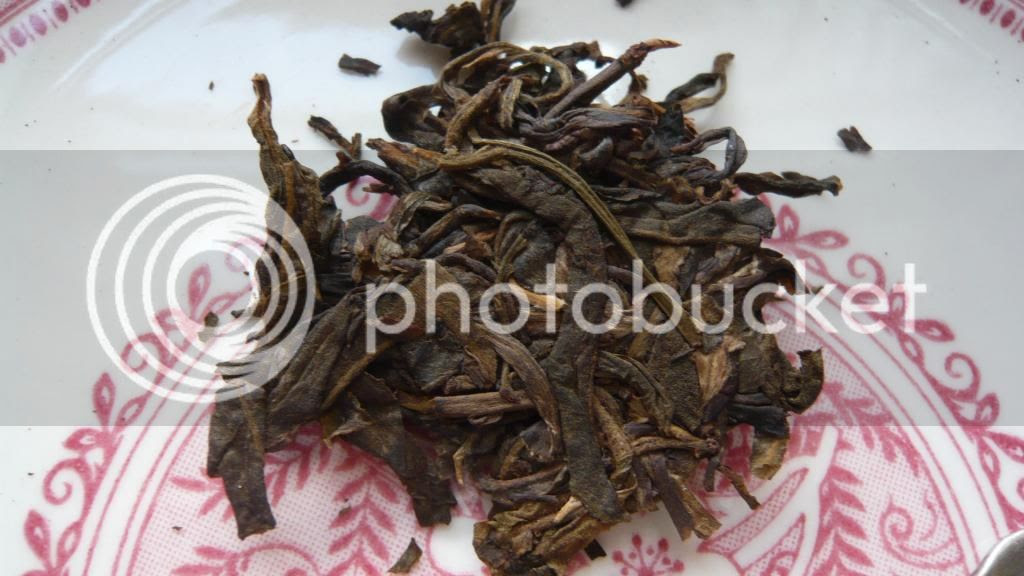 Close up look of the piece from the brick: 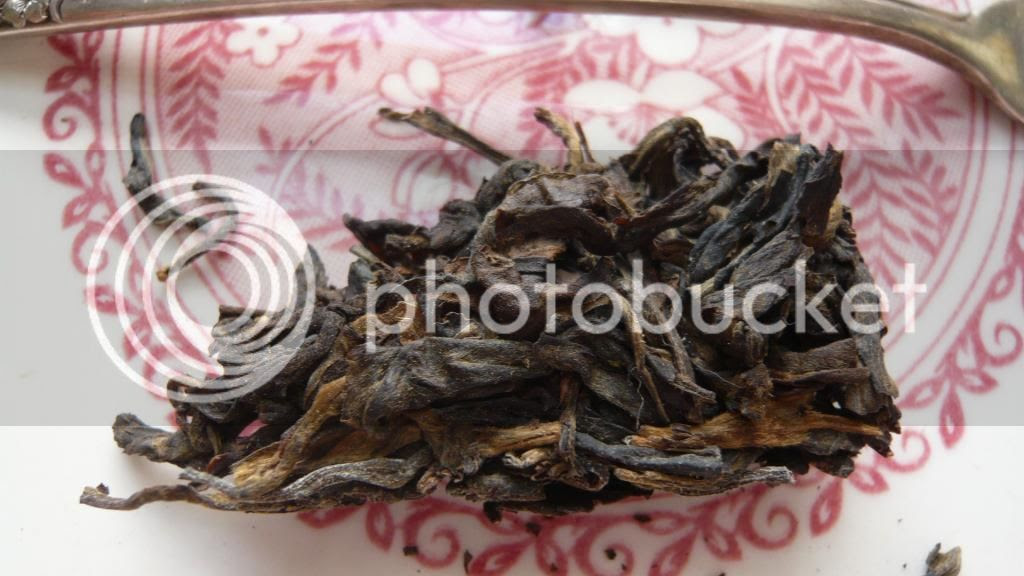 It turned out indeed I mistakenly took too large a piece of the brick for the teapot I assigned to it. This kind of things happen rather frequently, I have to admit. One of my favorite tea seller often says, "I don't know anything about Cha Dao (茶道), I only know something about Dao Cha （倒茶）." While I guess you all know what Cha Dao means, I want to point out that Dao Cha means pouring tea. He is a professional and knows how to pour tea very well. Compared with him, I don't know either Cha Dao or Dao Cha, and I just lower the standards for myself :-p

And indeed all these discrepancies in a comparative tasting would contribute to the final tastes of the teas. Would it affect a fair comparison? Well, if you think of it in another way - if you have to control all the brewing factors to detect the tiny small difference between two teas, wouldn't you just conclude that these two teas are *almost* the same and not distinguishably different from each other?

I know I'm rather wordy and I still have a lot to blah-blah about the comparative tasting of the two teas. So I would take a break here and come back to the tasting notes later. And here is a question for you (which is not a tricky question): from the dry tea photos alone, could you tell which one was Guangdong-stored and which was Kunming-stored?
at 5:00 PM

Oh, that's fun! I really like the idea of those two teas reunited again after ten years. Makes me want to buy two cakes and lend one to a tea friend in Europe (I'm in Canada) to see how their storage would affect them...

My totally uneducated guess would be that the brick was stored in Guangdong and the cake in Kunming -- from where I stand, the brick looks darker and... moister? I don't know how to explain... The cake looks like it would flake easier than the brick, which may well be because of the leaves pressing, but *might* also be because it was stored in a dryer environment. Hard to say though because I get the impression the lighting wasn't the same in all the pictures...

Looking forward to the tasting notes! ^^ Do the cake and the brick smell differently, too? ^^

Haha, happy to know we had the same idea, Nick! ^^

Nick and Leaf, thank you for taking the guess :-)
Leaf, it would be very interesting if you find somebody in Southern Europe to keep a same cake and compare!
Yes the cake and brick here smell very differently. It's always easier to tell by smelling than by photos :-)

Wow! great post.This will help all the tea lovers to know much about their favorite teas.
The best one is to drink the green tea because green tea has the most health benefits
which will make you healthier forever..